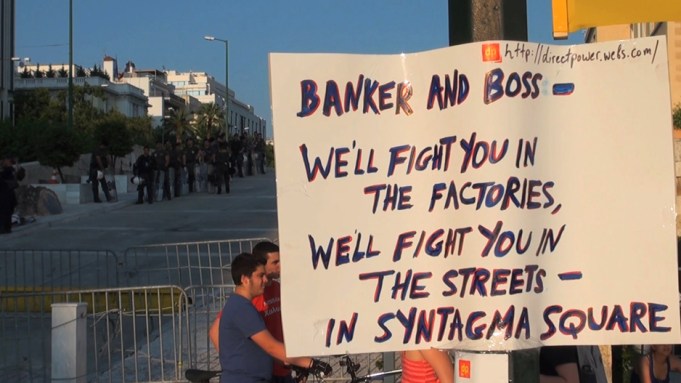 Of all the protest chants that have become popular over the past decade, “This is what democracy looks like” has to be my least favorite. It has never been clear to me what the phrase means, or what the people chanting it hope to convey. It seems to suggest that demonstrations are a form of democracy in action, or that dissent is an important component of democratic societies. But are all demonstrations expressions of democracy? Think of the torch-carrying neo-Nazi march in Charlottesville, or the anti-migrant protests in Chemnitz, Germany. And are all expressions of democracy good? The election of Donald Trump? The presidency of Nicolás Maduro? Many people profess to love democracy but don’t agree on what it looks like in practice.

Astra Taylor dives into this question with her new documentary What is Democracy? The path of inquiry is complex, and the film gets somewhat lost along the way. Early on, Taylor describes her vision of democracy while speaking with the Marxist feminist philosopher Silvia Federici. “It is not something that is ever actualized but always something that is in motion, an ideal we are reaching towards,” she says. The film unfolds from this point of view, stalking an elusive utopian vision of democracy. In vignettes and interviews, the documentary also focuses on the various countervailing forces—inequality, racism, migration, and capitalism—that threaten democracy’s potential.

The film opens in Siena, Italy, with Taylor and Federici discussing democracy in front of three large frescoes, painted in 1338 by Ambrogio Lorenzetti. The paintings, titled The Allegory of Good and Bad Government, depict a medieval city-state under the effects of good governance and the tyranny of bad governance. In an interview with Jezebel, Taylor said she chose the paintings because “Siena represents one of the origins of financial capitalism, it’s one of the places where modern banking emerged in the 1400s.” The paintings also represent a point in history when an ascendant merchant class was beginning to assert political power in societies dominated by monarchs. Taylor uses the frescoes to tie the rise of modern democracy to the emergence of capitalism, and the film examines the troubled relationship between the two systems at great lengths.

Taylor first conceived of the film during the wave of protest movements in 2011, many of which called for more democracy and limits on finance capitalism. She was involved in Occupy Wall Street and was struck by how the movement—and those like it taking place around the world—used direct democracy to make decisions, and also how problematic this was in practice. Taylor, who has made two previous documentaries, one on the philosopher Slavoj Žižek and another profiling several contemporary philosophers, decided to explore the notion of democracy. She structured the film as a Socratic dialogue, edited together from interviews and accompanied by strains of cello. She asks scholars and laypeople alike to grapple with the question of how democracy relates to other social and political forces.

When academics and public intellectuals such as Cornel West and Wendy Brown discourse on political theories or historical examples, the film can feel like a salon or an intimate lecture. But the man-on-the-street interviews—which take place in locations as varied as a Miami Beach promenade, a worker’s cooperative in North Carolina, and a free clinic in Athens—can wander as the respondents talk about elections, freedom, racism, or the American dream. The film was completed just before the 2016 election, and Donald Trump appears only for a brief moment. There are few scenes of voting or campaigning, legislatures or public assemblies. The forms democracy takes today are discussed largely in absentia.

Several interviews take place in the ruins of ancient Athens and discuss how the early idea of demokratia, or rule by the people, was developed in the city. But the film also explores modern Greece’s long economic crisis, in which a series of financial bailouts from international lenders forced the Greek government to impose harsh austerity. The 2015 electoral triumph of the left-wing Syriza party is presented as a cautionary tale about electoral activism. After getting into power on an anti-austerity platform, the party announced a referendum on whether Greece should accept a new bailout from the European Commission, the European Central Bank, and the International Monetary Fund. The Greek people voted against the bailout in overwhelming numbers, but Syriza caved to international pressure and accepted a bailout deal days later. This segment raises a question that runs throughout the film: who is actually included in the democratic process, and who is left out?

In ancient Athens, citizens participated in direct democracy, and most official positions were filled by selecting representatives from the populace at random. But this form of democracy was open only to certain citizens. Women, slaves, and foreigners—about seventy percent of the population—were all excluded. Echoes of this exclusion reverberate in other sections of the film. Taylor interviews Ellie Brett, an ex-felon, as he works in a Miami barbershop. A 2018 referendum restored voting rights to former felons in Florida, but at the time of the filming he could not vote. In another clip, William Barber, a preacher, talks about Republican efforts to suppress black voters at a large rally in North Carolina. It is followed by the footage of tear gas-soaked protests in Charlotte after the police shot and killed a black man named Keith Lamont Scott.  Later the film follows refugees living in camps at the Athens port, waiting to be let into the European Union, subject to EU laws but without any representation. In these short clips, the film circles around the suggestion that democracy, in its current form, is crumbling or incomplete, that intersecting forms of oppression, corruption, and exclusion are shrinking the numbers of people represented in the democratic process.

Plato’s Republic is another through line in the film. Quotations appear in title cards between different sections, suggesting connections between the book’s insights and the modern problems displayed on the screen. But it is an antagonistic relationship, a point West makes early in the documentary: “Plato’s Republic, provides the most powerful indictment of not just democratic practices but the possibility of democracy.” Plato argues instead for a sort of technocracy, run by philosophers. He was deeply suspicious of democracy and believed it inevitably led to the rise of demagogues who would try to win over the hearts of the people and become tyrants. His fears seem justified today, as a hollow populism takes hold in governments across the world.

The film’s section on modern Greece includes footage of Alexis Tsipras, the leader of Syriza, speaking at rally in the days before the 2015 referendum. “Whatever happens on Monday, we have already won. Today democracy is celebrating! Democracy is celebration!” Given that Tsipras’s party went against the results of the referendum, the scene suggests democracy has become a virtuous form without meaningful content. Can democracy be recuperated from its role as window dressing for capitalism? Taylor seems to think so but never lays out how or why. It’s clear she wanted to avoid making a wonky policy documentary, but I would have loved more concrete explorations into historical manifestations of democracy, as well as theoretical imaginings of what could be. What Is Democracy? is more lyrical than rhetorical. It raises questions about this idealized form of governance but does not offer much in the way of answers. Taylor set out in 2013 to unsettle and challenge our notions of democracy as it is currently conceived. Unfortunately, the state of the world may have beaten her to it.