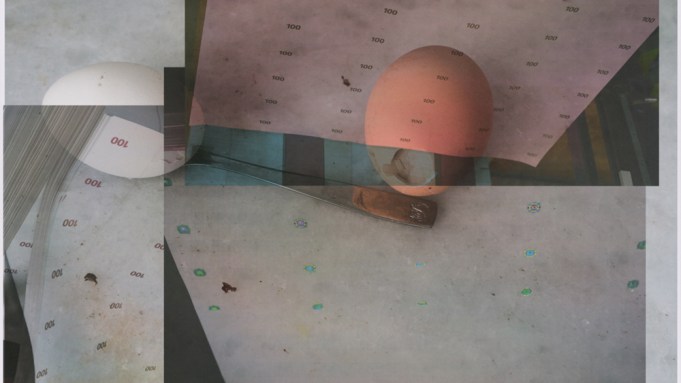 In a career spanning more than thirty years, German photographer Wolfgang Tillmans (b. 1968) has tried his hand at a range of genres, including landscape, street photography, portraiture, still life, and abstraction, producing work that is consistently fresh, stylish, and (at least in later years) pleasingly composed. He’s best known for his photographs chronicling European youth culture, particularly the LGBT scene, in the late 1980s and ’90s. Shot at picnics, parties, concerts, and the homes of friends and acquaintances, these images have a diaristic feel, even if they were often staged. Lacking the bite or astringency of, say, Nan Goldin’s work, they exude an aura of uncomplicated happiness and calm—which can make them either appealing or cloying, depending on your vantage point.

Even loyal admirers, however, were likely to have been underwhelmed by the images of people in his sprawling exhibition of new and recent work at David Zwirner. These lacked his signature buoyancy, seeming simply boring. Most of them were hung in the show’s cavernous first room and were straightforward portraits of people from places around the world. They appeared tenderly shot, but also willfully incurious and not at all penetrating. Karl am Tisch (2016) shows a casually dressed man sitting at a table and conveys something of his gentleness. But you sense a gulf between photographer and subject that the former seems uninterested in crossing.

In the past, Tillmans has produced dreamy, lyrical abstractions (as in his “Blush” series, which, with its icy reds and indigos, has passages of piercing beauty). But the abstract compositions in this show were largely innocuous. Tillmans made them by developing sheets of photographic paper in a processor containing varying amounts of water and ued chemicals. Each of the resulting prints is just a block of bright color marked by some smears, fades, and gradations. While these images sometimes have appealing qualities—such as the vibrancy of the candy orange, pink, and red in Silver 188 (2014)—they read mostly like computer wallpaper.

The smaller second gallery held the show’s standout works: quasi-surrealist photomontages that feature pictures of cracked eggs, insects, and (sometimes) intertwining body parts. The combination of pungent subject matter and saccharine color palette—lots of pink and fuchsia—made for a striking meditation on “life and decay, sex and fragmentation,” as the press release put it. Philharmonie Bloch IX (2017) includes various views of a nude male lying facedown on a bed. Images of bees dead and alive litter the composition, serving as a brilliant, double-edged metaphor: the sweetness of youth but also the perishability of desire.

Landscapes, object studies, and large, somewhat dour closeups highlighting textures (of sand, of bubbles) dominated the third and fourth rooms. And in the fifth you could hear a silly spoken word piece in which Tillmans rambles on about wanting to make a film about the technological sophistication of cell phones. Three videos were projected in a back room you accessed through a tunnel designed by the artist. One of them, Completely Changed (2017), is set largely within a high-tech telescope and follows the slow movements of its inner components. The footage is dull and the synth-pop track Tillmans composed to accompany it twee. That combination summed up the exhibition rather well.