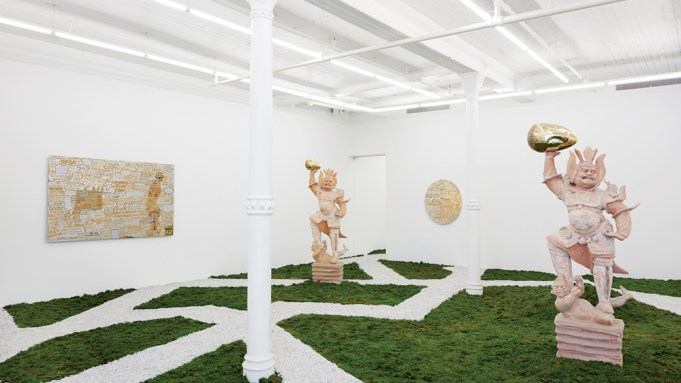 The title work in Xu Zhen’s exhibition at James Cohan’s Chinatown space was a site-specific floor installation, Movement Field (2018)—a jagged maze of crushed-white-stone pathways separated by patches of grass and extending through two rooms. The paths led visitors to other works by Xu: statues on pedestals and wall-mounted text pieces and paintings. While this makeshift garden emanated a sense of tranquility, the paths alluded to events that had erupted from social turmoil. The exhibition material explained that they replicated the specific routes of protest marches that had taken place at different times in different parts of the world, but noted that Xu “insists that the demonstrations remain unidentified.”

A conceptual artist working in Shanghai, Xu is known for ambiguous and occasionally controversial projects and gestures that may appear, depending on the viewer’s vantage point, playful or profound—or both. Or, possibly, neither. In 2009 he founded a company, MadeIn. The company has produced artworks, exhibitions, and publications, and in 2013 launched the “brand” xu zhen®—to which most, if not all, of Xu’s output since then has been attributed. Xu often works in series, creating what may be described as product lines of artworks, which are manufactured over the course of years. Among his most famous series are “Eternity” and “Evolution,” comprising works (mostly bizarre, beautiful sculptures, though occasionally paintings) that fuse iconic art pieces from Eastern and Western traditions. The show presented three nearly identical “Eternity” works from 2016 featuring a statue of a heavenly guardian from the Buddhist tradition holding up a bronze rendition of Brancusi’s egg-shaped head sculpture Sleeping Muse. Also on view was a 2016 “Evolution” piece in which a statue of a court lady from Imperial China wears an African mask. As is characteristic of Xu’s practice, the “Eternity” and “Evolution” works can be read in multiple ways—as gentle critiques of cultural appropriation and the commodification of art, for instance, or as celebrations of the cultural exchange occurring in today’s globalized world.

Movement Field itself was only the latest entry in a series of works; other versions, presumably referring to other protests, have appeared at venues in China and Europe. One might see these installations as allowing viewers to reenact the movement of marches and to some extent connect with the spirit of protest, or—in another valid interpretation—as ignoring the specific circumstances of each historic event and reducing the reasons for and emotions behind the actual demonstrations to geometric abstractions. The works maintain a certain aloofness—the perfect strategy for enticing the audience and deflecting criticism.

It is hard to say whether this strategy owes entirely to the Pop art sensibility, or whether it is largely a result of the political situation in China, where dissent is rigorously suppressed. Many Chinese artists have developed codes for addressing issues they cannot discuss openly without endangering themselves. Such codes, however, do not necessarily translate when the works cross national borders. In the United States today, Xu’s elegant “Movement Fields” risk seeming dismissive rather than evocative, as protest marches, along with the feelings of resentment and anger that cause them, become more central to everyday reality. Yet one wouldn’t be surprised if Xu Zhen, a successful brand as well as a perceptive artist, exported a more culturally attuned art product soon enough.