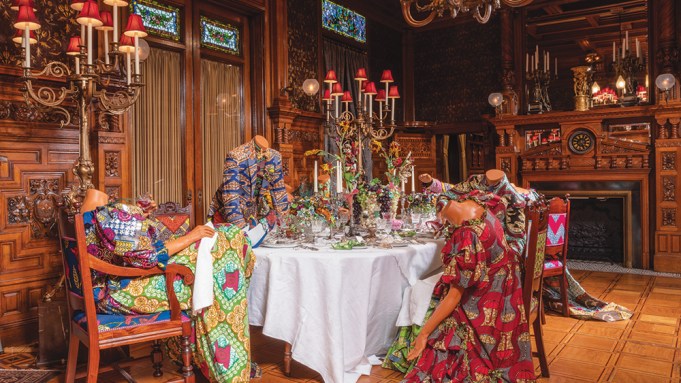 “A Tale of Today: Yinka Shonibare CBE” inaugurates the Driehaus Museum’s exhibition series spotlighting the work of contemporary artists of color, an exciting new direction for this Gilded Age mansion–turned–museum, whose programming has focused largely on art and design from the home’s original era. Hardly a neutral backdrop, the space dazzles with ornate woodwork and marble and stained-glass fixtures, while the decor, exemplifying the nineteenth-century Aesthetic movement, is a mishmash of Egyptian, Italian, English, and Moroccan influences.

This lavish hybrid environment is an optimal setting for London-based, British-Nigerian Shonibare’s work. Shonibare is best known for installations featuring headless mannequins in extravagant outfits that re-create eighteenth- and nineteenth-century European fashions using African wax print fabrics. A proto-postmodern commodity, such textiles were first made by the Dutch in the nineteenth century and have roots in Indonesia. Dutch traders failed to sell their cheaper, machine-made versions of traditional Indonesian batiks there, but found a receptive market for the fabrics in West Africa. The designs gradually changed to suit African consumers, and today wax prints are regarded as vital to local identity and culture.

An unruly group of Shonibare’s costumed mannequins has overtaken the mansion’s dining room. The installation, Party Time: Re-imagine America (2009), fits seamlessly into the setting: crystal bowls overflowing with wax print blossoms and rubber grapes echo the scenes of plenty in the stained-glass accents on the dining room’s doors. The figures ignore the spread of resin-cast oysters and quail eggs to make clumsy passes at one another: one grasps at empty air where a neighboring mannequin’s head should be, as if trying to plant a kiss. Shonibare’s mannequins have terra-cotta complexions, and thus cannot be identified as definitively “white” or “black.” They remind us that even in societies founded on white supremacist ideology, there has always been racial mixing, not least by way of slaveholders forcibly fathering children with slaves. Shonibare’s works not only affirm the historical agency of mixed-race people in hierarchical, segregated societies, but give them a seat at the table.

The Nickersons, like many upper-class Westerners of their time, had an appetite for “exotic” visual culture. In the Maher Gallery, where they once housed their collection of Asian art objects, Shonibare’s Big Boy (2002) strides forward into a shaft of light cast through a magnificent dome in the stained-glass ceiling. The seven-foot-tall figure, which has two small peaks on its outthrust, waistcoated chest and a peacocklike bustle, is of ambiguous gender. Its outstretched arms might be read as a welcoming gesture to the viewer or a challenge to the material histories this setting represents.