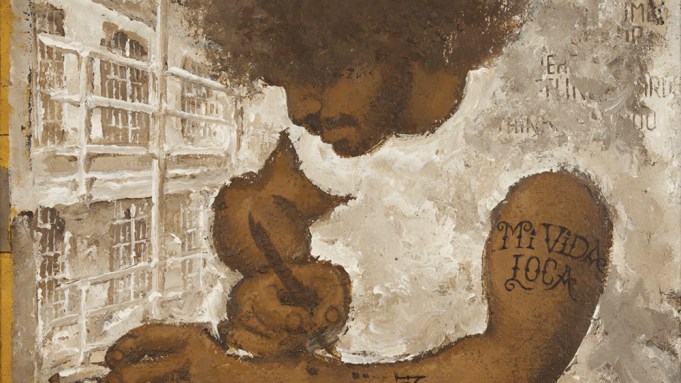 The America of career burglar Jack Black’s 1926 novel You Can’t Win is one of rampant crime, drug use, fugitivity, and punitive justice. For novelist and former New York Times art writer Randy Kennedy, it is also an America discernibly rigged to benefit the wealthy and powerful at the expense of society’s vulnerable. In other words, Black’s America is in no small part the America of today. The artworks, historical documents, and books (including a rare first edition of Black’s book) that Kennedy assembled as curator of “You Can’t Win: Jack Black’s America” reflect the themes of social alienation and transgression that drew William Burroughs and others to Black’s story. At the same time, they testify to forms of structural violence that are as prevalent in our own era as they were at the cusp of the Great Depression.

Prison life was a prominent motif in the exhibition. Out of roughly a dozen vintage postcards on loan from author and expert in early twentieth-century American depravity Luc Sante, several pertained to crime and punishment, including one featuring the morbid image of a man strapped to an execution chair. In the images from Jack Lueders-Booth’s “Women Prisoners” series of color photographs, which he took between 1978 and 1985, a period in which the incarceration rate in the United States began to skyrocket, what comes across is a sense of ongoing vitality in the face of deadening circumstances. One image captures a black woman and a white woman snuggled together in solidarity; another features a woman posed on a bed surrounded by everyday objects of survival: photographs, art, books, a stereo. Near the gallery entrance was a painting by Martin Wong depicting his incarcerated friend Miguel Piñero—a founder of the Lower East Side’s Nuyorican Poets Café—wielding a tattoo needle in one hand and holding a cigarette in the other. Piñero wrote extensively while imprisoned, and this image of his upper body dissolving into half-visible words suggests an imagination uncontained by prison walls.

A prison letter from Rubin “Hurricane” Carter to Sammy Davis Jr., in which the middleweight fighter describes how he was dealt a life sentence “for nothing—except being black,” reminded visitors that America’s rigged system has always disproportionately impacted nonwhites. Viewed in relation to Carter’s letter, a 2011 enamel painting by Christian Patterson spelling out the phrase black moods in black on black seemed charged with racial significance. This felt all the more acute owing to the work’s proximity to Beverly Buchanan’s Miz Hurston’s Neighborhood Series—Church (2008), a small painted replica of a church from the town in which author Zora Neale Hurston, whose writing centered on being black in America, died in obscurity.

Lonesome death, of course, is as American as racism and apple pie. In his press release, Kennedy writes movingly of Jack Black’s presumed suicide; and much of the work on view was suffused with a sense of mortality. Still, an emphasis on the artwork’s ability to outlive its creator and to spark the imaginations of future generations offset the show’s gloomier tones. Not much is known about the life of Pearl Blauvelt (1893–1987), a northeastern Pennsylvanian woman who lived and died in apparent solitude, but whose strange, childlike artworks are now exhibited widely. Three small pencil drawings by Blauvelt were included in the show, each featuring a built structure—a home, a store, and a large somewhat ominous-looking building—whose interiors are eerily visible through the outer walls. Like the exhibition as a whole, these works served to memorialize those who live out their lives on the cultural periphery and see beyond the boundaries of “normal” American life.