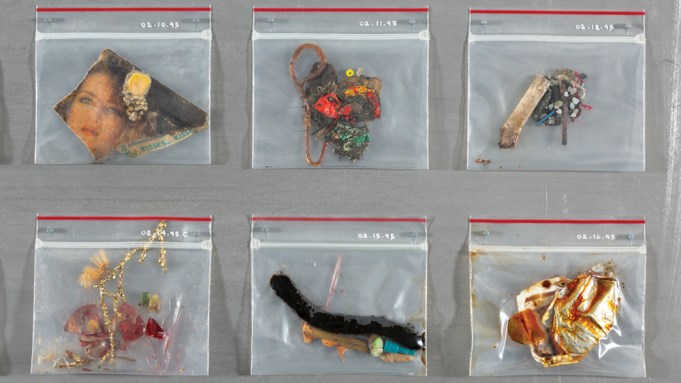 For the past three decades, Yuji Agematsu’s work has revolved around a single conceptual approach: he gathers small pieces of trash on daily walks around New York and arranges them into miniature sculptures. The works are titled matter-of-factly, with the dates on which they were made, and organized into chronological groupings. Agematsu’s most recent exhibition at Miguel Abreu, “1995 & 2003,” presented two year-long cycles of these works, each adhering to a strict organizational scheme. Juxtaposing works the artist made almost a decade apart, the show revealed multiple facets of his prolonged meditation on time.

Plexiglass shelves displayed rows of works that Agematsu calls “Zips”: cellophane cigarette wrappers filled with urban detritus, a format he first adopted in 1996. The examples here spanned 2003, and their contents included melted plastics, pulped labels and receipts, and tangled lengths of string. The other works on view, titled “Ziplocs” and made in 1995, have a more straightforward presentation: the artist forensically enclosed each day’s finds in a small plastic baggie and placed the results in calendar-like grids on sheets of bent steel. From afar, these arrangements appear almost coldly taxonomic, yet they teem with expressive details when viewed up close. Agematsu arranges bits of refuse so delicately that a bent Q-Tip hovering above a pool of melted lollipop looks more like ikebana than abject filth.

While the individual components of the various works were diminutive, the selection as a whole evoked a more sublime scale, with each series crystallizing a vast practice of urban meandering into tangible displays. The evenly spaced installations suggest an indebtedness to the modular forms of Donald Judd, perhaps reflecting the years Agematsu spent working for the Judd Foundation as the building manager at Judd’s former live-work studio in SoHo. However, the serial repetition in these works also alludes to the ceaseless production of trash under consumer capitalism: Agematsu will continue to collect bits of eye-catching cud for as long as he’s alive and the city keeps spitting them up.

The exhibition also included several vitrines displaying pages from Agematsu’s notebooks. One notebook, from 2003, was a dutiful record of the exact location and time of each of Agematsu’s finds; another, from 1995, detailed the routes he took on his walks, recalling his fellow Japanese expatriate On Kawara’s series “I Went” (1968–79), in which the artist traced his daily movements in red ink on photocopied maps. Agematsu’s writing in the notebooks is so miniscule and compressed that it forms barely legible blocks of lines on the page.

In a series of wall-mounted notebook pages from 2003, Agematsu created dense psychogeographic drawings based loosely on his walks. The most interesting ones feature the traced outlines of small found objects, which determined the boundaries of the composition. Within these irregular contours, the artist plotted small dots and squiggling lines representing his routes, the results often recalling bacteria on a petri dish. Despite Agematsu’s rigorous documentation of his walks, the variability of his works suggests that the artist is uninterested in arriving at any kind of fixed meaning; instead, he embraces the city’s continual change, repeatedly tracing and retracing its streets. One drawing, a dense network of bursts and swirls in red and black ink, bears a title, drawn from Japanese novelist Abe Kobo’s book The Ruined Map (1967), that perfectly encapsulates this spirit: The City—a bounded infinity. A labyrinth where you are never lost.