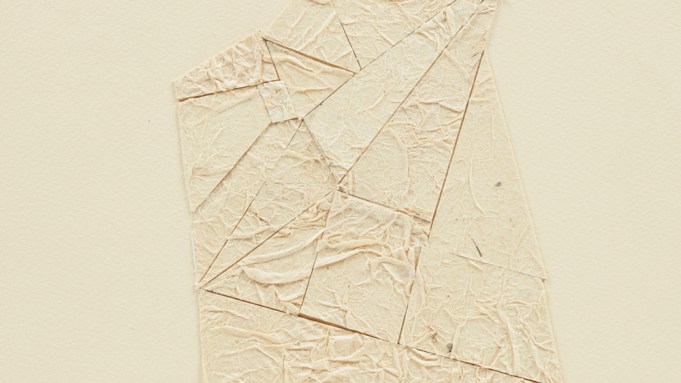 The printmaker and collagist Zarina Hashmi, who goes by her first name, is one of the foremost figures of South Asian art. She was born in the northern Indian city of Aligarh in 1937 and witnessed the communal violence of Partition firsthand. In some of her best-known pieces, such as Dividing Line (2001), she directly addresses the 1947 cleaving of India and Pakistan. Elsewhere, she deploys a minimal visual language, stressing materiality while also alluding to diasporic themes such as loss, displacement, nostalgia, and longing for home. (After living an itinerant life for many years, Zarina settled in New York in 1976.) However, the works in this exhibition of her recent collages were quieter and more reflective, featuring no direct references to politics or identity. While it may be impossible to make a final peace with Partition or the experience of immigration, Zarina seems to have declared a temporary truce.

The collages are made up of pieces of crushed handmade paper and of woodcut prints, materials that suggest delicacy and impermanence. The compositions are formally spare, if not slight, largely featuring geometric shapes such as triangles, crescents, quadrilaterals, and circles—Zarina studied mathematics—though two are representational, depicting the sky and a cityscape, respectively. The artist wove together strips of woodcuts in some works, but most often she assembled the pieces with glue. In a few instances, she included handwritten Urdu titles below the compositions, as if to counter the widely held notion that abstraction belongs to the West.

She has restricted herself, as she always has, to black, white, and beige, occasionally livening things up with applications of gold or pewter leaf. This austere palette calls attention to the works’ textural variation, which is their biggest draw. Consider a number of untitled 2016 collages, made by mounting pieces of off-white handmade paper onto buff-colored paper. Though constructed from the same elements—triangles and quadrilaterals (mainly trapezoids)—they are varyingly rugged and gauzy, scratched and clear, their effects evoking different inner states. A more complex picture, also from 2016, shows a beige circle against a jet-black background. The shape is made up of thin, parallel strips of paper whose orientation—horizontal or vertical—alternates from one quadrant to the next. Just as the linear parts conflict with the circular whole, each quadrant is at odds with its neighbor. Factor in the clever black patterns on the strips, which generate movement in different directions, and the abstract collage amounts to a powerful portrayal of inner conflict.

Not all the works achieve this decisive emotional liftoff. For example, an untitled 2017 piece comprising a line of five identical trapezoids remains “geometric” in a banal sense. The limited formal range of the show made such failures stand out and made the presentation seem a little repetitive, even crowded, despite the generous amount of wall space left between the works.

A 2016 installation titled The Ten Thousand III dominated the main gallery. The third iteration of an ongoing series, it is a kind of mini-retrospective, with a hundred small-scale prints and collages shown on a circular white table. These pieces are either versions of works Zarina has previously made in her six-decade career or new variations on motifs she has used before. The installation is a riff on Marcel Duchamp’s La Boîte-en-valise (1935–41), for which the artist filled boxes or leather valises with reproductions of his greatest hits. Where Duchamp was interested in the tension between the original and copies, however, Zarina’s concerns are time and seriality. Rather than simply re-presenting her oeuvre, she approaches her earlier work as material for experimentation.

Thousands Dead in Turkey and Syria After Two Massive Earthquakes