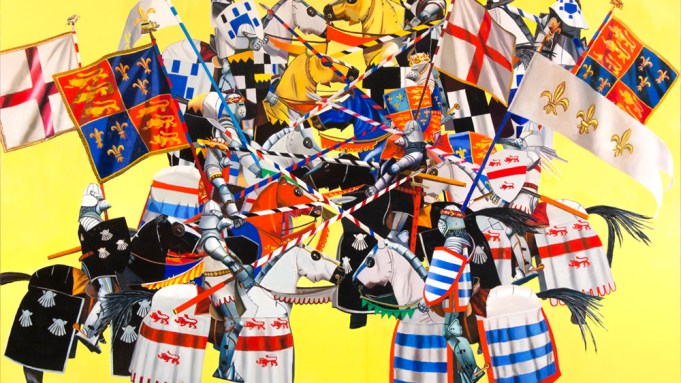 In a career spanning more than six decades, Malcolm Morley (1931–2018) earned an international reputation as one of the most audacious and trailblazing artists of his generation. He is widely credited with having launched at least two important art movements. For some years in the mid-1960s, Morley was at the forefront of Photorealism (or Superrealism, as he preferred to call it), along with Richard Estes, Audrey Flack, and Chuck Close. In the late 1970s, Morley developed an improvisational style of figuration—later known as Neo-expressionism—and inspired artists such as Julian Schnabel, David Salle, and Eric Fischl.

Despite having secured a place in the canon, Morley remains something of an enigmatic cult figure. He was highly regarded throughout his career—especially by his artist peers—for his skill as a painter and his boundless ambitions for the medium. In some sense, the Turner Prize winner strove to be a painter of history. Yet his images of the arcane past also address autobiographical themes surrounding his troubled youth as well as the tumultuous cultural conflicts of the time when they were made.

The London-born artist, who moved to New York in 1958, frequently challenged audiences with seemingly abrupt shifts in style, technique, and imagery. For those up to the challenge, however, the work was always intellectually sound and visually thrilling. Morley approached each new painting as if engaged in a serious battle to be waged and won. Full of wit and acerbic humor, Morley could be surprisingly self-deprecating. During the times we met, in his Bellport studio and in New York for dinner or gallery visits, he always brightened the conversation with puns, jokes, and humorous asides. Despite struggling with illness, he continued to paint until a few weeks before his death on June 1, just six days before his eighty-seventh birthday.

“Malcolm Morley: Tally-ho,” a concise and refined survey of Morley’s work with an emphasis on his last canvases, is on view at Sperone Westwater Gallery in New York through October 27. The show includes the artist’s final painting, St. George Fleeing a Prairie Meadow Burning (2018). As noted by scholar Tim Barringer in the exhibition’s catalogue, this striking image features the patron saint of England in armor on horseback. He charges through a Western American landscape in flames, a scene inspired by a nineteenth-century work by George Catlin, best known for his portraits of Native Americans. Other major late works here include the mural-size Melee at Agincourt (2017), showing heavy cavalry in full armor and with lances; the colorful regalia creates a mesmerizing optical effect against a searing yellow background. Also on view is Cristoforo Colombo (1966), a painting of an ocean liner representative of Morley’s Superrealist works. And The Ultimate Anxiety (1978), an expansive composition featuring a freight train incongruously crashing through the air into a seventeenth-century Venetian regatta scene, is a major example of one of his early Neo-expressionist works.

A public memorial for Morley will be held at the Metropolitan Museum of Art on October 21 at 3 PM. (RSVP is required. Write to rsvp@speronewestwater.com). A number of his art-world peers sent remembrances to the Brooklyn Rail. Others shared their thoughts with me. Artist and writer Walter Robinson, who knew Morley, offered this statement about his life and work:

“Malcolm Morley was a tough-guy painter, who famously turned to art in prison as a kind of rehabilitation. Adopting the most rudimentary of methods, Morley squared off postcard images and laboriously reproduced them on canvas by rote, thus inventing his own art movement, Photorealism. That he painted ocean liners seems too fitting in retrospect, since those supposed luxury vacationers are, in reality, trapped in racks of cell-like cabins on cruises to nowhere. These works have their own special allegorical impact. Subsequent subjects like aerial dogfights and motocross stunts retained a brash adolescence, which translates into a painterly style that persists in challenging the fine art world’s increasingly domesticated tastes.”

In an email, Estes said of Morley’s early paintings, “I remember first seeing his work and being encouraged by it to think that other artists were also working in a realistic manner, doing the forbidden thing—using photographs.”

Flack, in a recent telephone conversation, said, “I did not know Malcolm well, but I met him several times. He had a fiery personality—just like mine. The ocean liner paintings were really impressive. They were iconic. Malcolm was interested in archetypes, like I was. He was really not so interested in the cool, unemotional approach of most of the artists associated with Photorealism. Generally, the colors the Photorealists used were toned down. You couldn’t say that about Malcolm’s work, nor mine. Ultimately, Photorealism was not enough to contain him, or us. Malcolm had such an incredible, fertile mind, with so many ideas that had to come out.”

In recent years, Morley was preoccupied with developing a new genre of painting that he dubbed “Super-Post-Pop.” The works from this group he showed me in his studio had unmodulated, bold colors, hard-edge forms, and crisp lines. Jarring juxtapositions of seemingly incongruous elements were designed to convey complex narratives of the artist’s imagination, and transcend the deadpan irony associated with Pop.

He used children’s toys as models and sometimes built elaborate miniature tableaux that he then rendered in two dimensions. He felt that at this point in his career it was the best way for him to tell a story. One of the works I saw in the studio, Hobby Horse (2015), included in the Sperone Westwater exhibition, is a prime example of Super-Post-Pop. A strange battle appears to be in progress. A spaceship hovers above a group of soldiers in ancient garb who pull two Trojan horses while a column of fire rises above a distant fort. Here, Morley fuses the past and future in an explosive intergalactic battle.