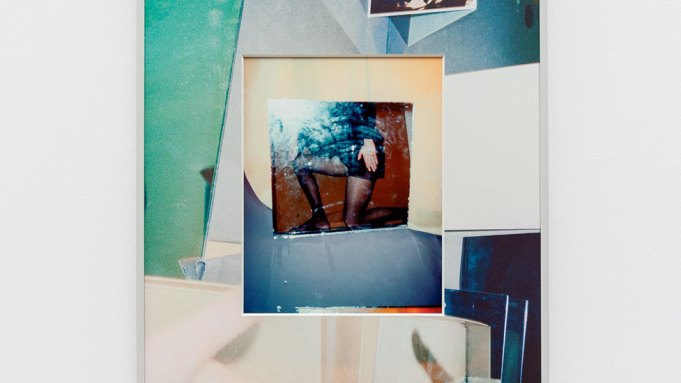 B. Ingrid Olson’s work brings together aspects of photographic montage and performance. She often depicts her own body, but complicates perceptual dynamics through techniques such as blurring, segmented views, self-quotation (rephotographing her own prints), and the use of mat boards printed with images. Her fractured works, which are set largely in the artist’s studio, draw their power from the way they coerce the viewer into the artist’s viewpoint. “When your eye hits the edge of one image to find the edge of another image,” she noted in an interview with artist Lucas Blalock, “there is a kind of pushback, creating an awareness of looking rather than seeing.”

Olson (b. 1987) lives and works in Chicago, where she earned a BFA from the School of the Art Institute in 2010. While her studies there focused on drawing and painting, she took up photography after graduation, attracted, as she said in an interview with curator Alfredo Cramerotti, by the possibility of deconstructing the gaze through performance documentation. In Mutilation, self delay (2016), for example, a section of the artist’s body, reflected in a mirror, is nested in a jumbled field of images, some printed on a mat board, her legs and torso visible—in a short-skirted cocked-knee pose—but her upper body obscured by the camera’s flash. On the mat board, part of a blurry hand can be seen, perhaps holding a camera, as if threatening to reduce the creative act to a forensic one. Olson’s conceptual frame is distancing, and yet the performativity of the central print insists on her presence. This tension is about gendered looking, which Olson at once evokes and corrects; the gaze is interrupted by the viewer’s own awareness of it.

More recently, Olson has experimented with placing montages and single photographs in plexiglass boxes to fashion a kind of photographic sculpture. Here, the tension between presence and removal plays out at a material level. In Source and crude bone (2017), on view in Olson’s current solo at the Albright-Knox Art Gallery, Buffalo, the plexiglass encases an image of the artist’s legs juxtaposed with their blurred reflections. The transparent box imbues the work with physical heft, preventing the viewer from seeing the artist’s body solely as an image.

Olson also makes modestly scaled mixed-medium architectonic relief works evoking the human form. Future Body, plastic drawing (2017) is a rectangular abstract relief, made of PVA, with a cross marking a crotch, notches suggesting a waist, and shadows suggesting the curves of breasts. Instead of reinforcing the artist’s perspective, such sculptures provoke an increased bodily awareness on the viewer’s part.