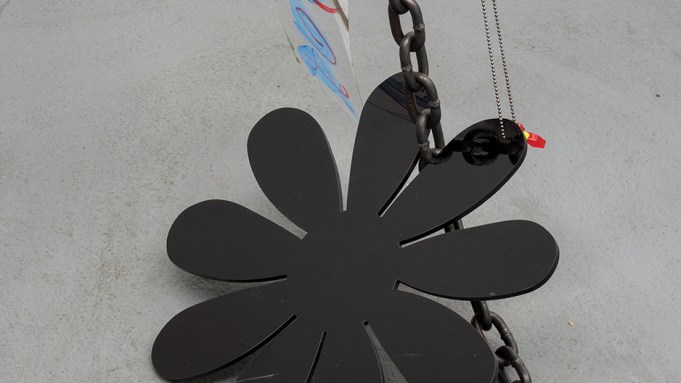 Raque Ford found herself struck by Friendship Cemetery while visiting her mother’s hometown of Hot Springs, Arkansas, last summer. Officially established in 1924, Friendship Cemetery bears local historical significance as a burial site for the city’s Black community and holds personal weight for Ford, as many of her ancestors are interred there. The cemetery and its ill-maintained, dilapidated grounds—particularly when compared to Hollywood Cemetery, located just across the street, which has a dedicated section for fallen Confederate soldiers—sparked her new body of work, currently on view in “Greater New York” at MoMA PS1.

Ford’s visit occured shortly after her father’s death, and experiencing these sites both heightened and undercut her grief. She began to write her way through her mourning, later editing and revising her texts in a poetry class. Fragments of that text (HOW CONFUSING THE GRAVES ARE HERE, reads one stray line) were laser cut onto stiff sheets of colored, translucent acrylic, then arranged in layers and affixed, mural-like, to the walls of MoMA PS1, forming two wall works titled Hollywood Cemetery (I The Fool) and Friendship Cemetery (The Wise), both 2021. In their arresting, graphic compositions and evocative wordplay, these large-scale pieces resemble something between familiar architecture—the mounting and incisions recalling errant graffiti on a city wall—and private diary, testifying to Ford’s nimble public presentation of intimate feelings.

Fashioned from industrial, prefabricated, and salvaged materials, Ford’s painterly installations meld abstraction with an eclectic writing practice. In earlier installations, Ford underscored her background in painting and printmaking: for her 2017 solo exhibition “Carolyn” at Shoot the Lobster in New York, the artist added expressive, colorful marks to clear acrylic panels, and suspended them from the gallery ceiling with chunky chains. But over the last year, she’s tightened her focus while paring down her materials and techniques, highlighting and clarifying the relationship between form and content. In these most recent installations, the artist allows text, color, and material to breathe, coexisting in layered compositions that reveal a process both playful and structured in equal measure.

Uncanny juxtapositions are the key to Ford’s aesthetic sensibility. The artist, who studied painting as an undergraduate at Pratt and Received an MFA from Rutgers in 2013, is attentive to how materiality intersects with light and space to co-produce an experience for and with the viewer—an aesthetic out look that owes much to the legacy of Minimalism. Ford troubles that lineage, soaring past its associations of brute masculinity by incorporating an abstracted combination of  hand-made markings, color, and cut-out shapes.

Onto her shiny plexiglass surfaces, Ford inscribes, stamps, and carves words and phrases from an ever-expanding lexicon derived from song lyrics, fan letters to pop stars, and scraps of eavesdropped and misremembered conversations that the artist saves as notes on her phone. Everything is copy; every inscription is a reinscription; every discarded edge can be repurposed to fit a new shape. Such are the ideas that drive Ford’s forthcoming solo exhibition at Greene Naftali in March 2022, which will build on and reinterpret the themes explored in both Friendship and Hollywood Cemetery.

What is most compelling about Ford’s practice is not the naked confessionalism of her textual incisions, but how her layered, laser-cut letters portend precision yet still invite misreading and open interpretation. If every act of writing is undertaken as an attempt to communicate, what always lurks beneath is the threat of misunderstanding, even in the most direct language. Ford’s porous installations and diaristic phrasings may at first blush present an open-ended relatability, but the rigid materiality of her work nevertheless functions as a necessary psychological barrier between viewer and artist. That protective distance allows Ford’s intimate admissions to remain alluring and alive.

The 101 Best Christmas Gifts of 2022 for Clearing Holiday Wishlists