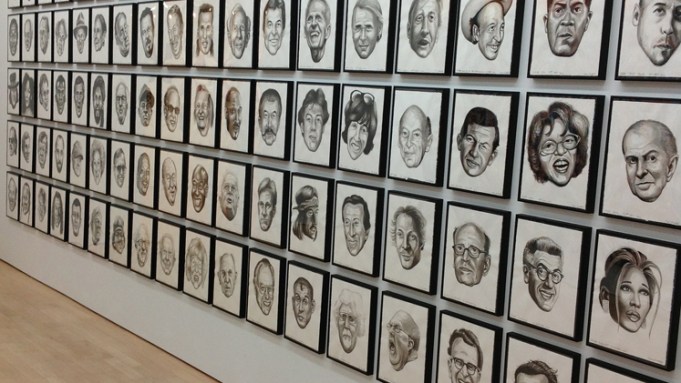 Walter Benjamin wrote that the souvenir “is marked by the increasing self-alienation of the person who has inventoried his past as dead possessions.” It embodies, he added, “the extinguished experience.” Indeed there is a certain souvenir-like quality to Tom Sanford’s often caricatured, sometimes comic portraits of the dead in “100 Little Deaths,” equal parts extinguishment and roadside attraction—a collection of death masks for the TMZ age.

On display at BravinLee programs in Chelsea through Feb. 9, “100 Little Deaths” is part solo exhibition, part group show. The front room is devoted to two large works by Sanford. The first, 100 Little Deaths (2012), is a series of 100 small, oil-on-panel drawings, each a portrait of someone notable who died in 2012. On the opposite wall, Sanford’s 8-by-16-foot painting, Departures (Last Call) (2012), recalls the pages of Mad magazine, gathering the dearly departed together at an airport to celebrate New Year’s Eve and await their final voyage.

The smaller back gallery is devoted to paintings by Sanford and 41 other artists, each of whom was commissioned by Sanford to select a notable death from a list compiled by the artist, and paint it. Sanford’s roster began with Don Carter, a professional bowler who died on Jan. 5, and ended with General Norman Schwarzkopf, who died on Dec. 27.

“My criterion was that I had to be aware of the person before they died,” Sanford explained. “But I ended up not always sticking to my criterion, because there were some people who became notable in death.” Trayvon Martin, the unarmed black teenager whose fatal shooting sparked at national outcry, was included. So was Victoria Soto, the 27-year-old teacher who died protecting her students during the massacre at Sandy Hook Elementary school.

John Lee, the gallery’s co-owner, compared Sanford’s work to early Renaissance painting, in which the viewer always recognized the subjects portrayed. Though the same can’t be said in general about all 41 other artists in the accompanying group show, it can certainly be said about their work in “100 Little Deaths.”

“We all know more about this than we do anything else,” Lee said with regard to pop culture, “even if we pretend that we don’t.”

The artists here only occasionally or subtly resort to irreverence, offering bits of wry commentary when they do. Josh Jordan’s Donna Summer stands atop a slice of cake surrounded by unicorns and rainbows, ironically recalling the drug-fueled culture that embraced her music; Nic Rad’s Joe Paterno is shirtless and densely layered with thick, lush brushstrokes that seem to fossilize their subject.

One might have expected more crassness in the exhibition, given the title (in French, la petite mort is a euphemism for orgasm) and the recent history of the curator, who hasn’t always treated celebrity death with a gentle touch. Shown in a group show at Freight+Volume earlier this year, Sanford’s Whitney Houston (2012) depicts the ill-fated singer in a bath tub, eyes half-lidded, blissed-out to the point of ecstasy and raising a glass of Dom Pérignon to herself. A crack pipe lies smoldering in an ashtray beside her.

“I think people tend to be respectful of death-with the exception of my Whitney Houston,” Sanford said laughing. For this show the approach was a bit softer. “I asked [the other artists] to pick the person who meant the most to them, or whom they had some sort of intellectual or social engagement with.”

Other paintings are in turns exploratory, mournful, reverential and fearful. Ryan Schneider’s painting of artist Will Barnet, who died at 101, is crisp, moody, almost wary, as though captured in purgatory. Daniel Heidkamp’s painting of Junior Seau, a pro football player who committed suicide in May, is dreamlike and removed, as though Seau were gazing at us from a departing bus window.

“A portrait really doesn’t mean something until the person is dead,” said Sanford.