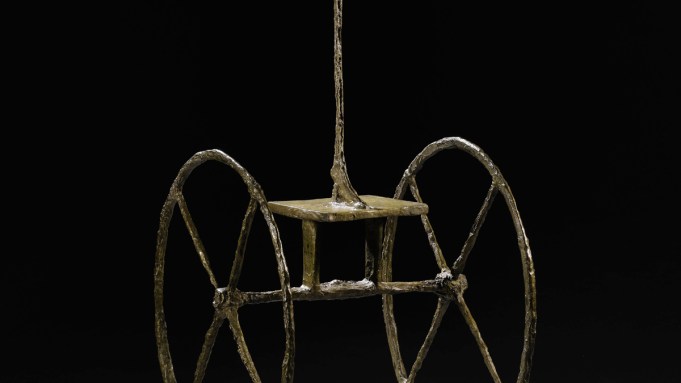 Sculpture dominated at Sotheby’s Tuesday night in New York, as a $100.9-million Giacometti bronze and a $70.7-million Modigliani stone head helped to push the house to its highest-ever sale total, at $422.1 million. It was a rousing start to two weeks of New York auctions at Sotheby’s, Christie’s and Phillips.

Van Gogh’s Still Life, Vase with Daisies and Poppies was the night’s third-highest seller at $61.8 million, and went to an unnamed Asian buyer.

“The star lots were amazing works,” Citi Art Advisory’s Suzanne Gyorgy told A.i.A. after the sale, “although I would have thought the van Gogh would have gone higher, and the bidding on it was slow.” The record for a van Gogh is $82.5 million, set at Christie’s in 1990 for the Dutchman’s Portrait of Dr. Gachet.

Painted just a month before his death, van Gogh’s 1890 still life solidly exceeded its $50-million high estimate. The canvas, measuring just 2 feet high, contrasts bursts of red and blue flowers with a pale green ground. It had been off the market since 1991.

Of 73 lots offered, 58 found buyers. Halfway through the two-hour sale, the house had already garnered its highest Impressionist sale total. The sale went on to tally the highest amount for the house in any category.

The night’s biggest ticket, Giacometti’s bronze-and-wood sculpture Chariot (1950), measuring just under 5 feet high, met its estimate of $100 million. A trademark elongated figure stands atop a platform mounted atop two large wheels. After opening at $80 million, the bidding was slow and suspenseful, stretching over three minutes that saw only five bids in $2-million increments, with the sculpture hammering at $90 million. Even auction veterans told A.i.A. they were unable to identify the bidders, except for Sotheby’s specialist David Norman, conveying a telephone bid.

The sculpture nearly matched the artist’s auction high of $104.3 million, set at Sotheby’s London in 2010 with a Walking Man from 1960. Tuesday night’s sale was just the second sculpture in auction history to cross the $100-million mark. It had remained in private hands for four decades. The seller was guaranteed an agreed-upon sum by the auction house prior to the sale.

The 1911-12 Modigliani gray stone Head, 28 inches high, depicts a dramatically elongated woman’s face. “The Modigliani is magic,” New York private dealer Andrea Crane told A.i.A. “Standing in front of it, you remember what art is supposed to do.”

Monet sold well, with four canvases by the Impressionist placing in the evening’s top 10, one of them selling for as much as $33.8 million.

“There’s a lot of liquidity all over the world, especially in the Far East,” dealer David Benrimon told A.i.A., speaking of the freewheeling spending.

Pablo Picasso’s 1969 canvas Seated Man, showing a mustachioed, green-clad figure, was pegged to sell for up to $12 million, and brought $11.4 million. It was the top Picasso lot, with two others placing in the night’s top 10. The Spaniard is heavily represented in the Metropolitan Museum of Art’s exhibition of a gift from Leonard Lauder; also currently on view is a John Richardson-curated show on Picasso and the camera at Gagosian, as well as a Picasso exhibition Pace New York.