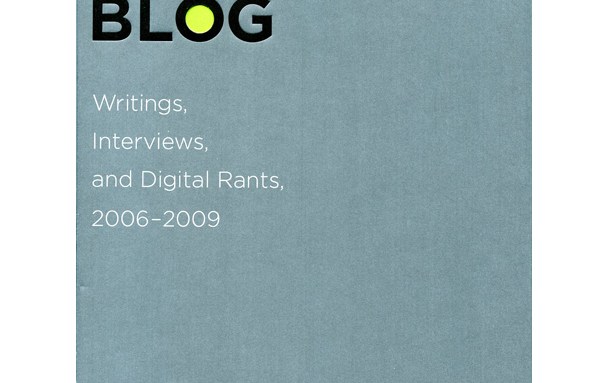 Art in America’s critics write their way through the best of 2011. We’ve asked leaders in the fine arts to highlight the top works in their areas of special focus. Stephen Maine is a Brooklyn-based painter, critic, curator and teacher, and a frequent contributor to this magazine.

Ai Weiwei’s Blog: Writings, Interviews, and Digital Rants 2006–2009, edited and translated by Lee Ambrozy, MIT Press.
The latest addition to MIT’s “Writing Art” series collects just a fraction of the Chinese artist-activist’s 2,700 blog posts on such topics as architecture, photography, Warhol, the Beijing Olympics, Chinese cultural life, and the excesses and abuses of his country’s Communist Party. Ai attributes the deaths of thousands of children during the 2008 Wenchuan earthquake to “tofu-dreg” construction, and his criticism of the government’s handling of that disaster led officials to shut down his blog-presaging heavier-handed forms of harassment to follow. Ambrozy’s nimble translation and abundant annotations illuminate Ai’s indignation in the face of institutionalized corruption and incompetence.

Defining Contemporary Art: 25 Years in 200 Pivotal Artworks, Phaidon
A posse of internationally known curators—Daniel Birnbaum, Connie Butler, Suzanne Cotter, Bice Curiger, Okwui Enwezor, Massimiliano Gioni, Bob Nickas, Hans Ulrich Obrist—each select 25 works through which they chart the landscape of recent art, year by year since 1986. At a time when the concept of the “masterpiece” is marginalized, the book perversely makes the case for the individual work of art as a means to understand what artists worldwide are up to. A platform for the contributors’ ideas and enthusiasms, the book also foregrounds the trend of professional curators’ advocacy for specific artists, an aspect of the curatorial activity that, for better or worse, has become explicit in the last generation or so.

Phenomenal: California Light, Space, Surface, Robin Clark, ed., Museum of Contemporary Art San Diego and the University of California Press.
Of the many superb books related to “Pacific Standard Time: Art in L.A. 1945–1980,” the ongoing extravaganza initiated by the Getty and involving some 60 venues in Southern California, Phenomenal is among the most elegant. Its format is modest, compact; the design is appropriately austere; the plates are beautiful. Essays by Michael Auping, Dawna Schuld, Stephanie Hanor and Adrian Kohn address the Light and Space artists’ relationship to architecture, perception, materials, and the language used by both artists and commentators to describe and analyze this resolutely nonlinguistic work.

de Kooning: A Retrospective, John Elderfield with Lauren Mahony, Jennifer Field, Delphine Huisinga, Jim Coddington and Susan F. Lake, edited by David Frankel, MoMA.
This volume magnifies and clarifies the great exhibition’s many facets, honoring the complexity of de Kooning’s historical presence and his work’s lasting fascination. Short essays examine various aspects of nine distinct phases of his career; to each phase is appended a detailed chronology and an analysis of materials and methods used in a single representative canvas. In his idiosyncratic syntax, de Kooning once described himself as a “slipping glimpser,” referring to his preference for the incomplete or provisional information that a dynamic viewpoint affords, and this teeming book aptly provides slipping glimpses of one of the giants of 20th-century painting.

Larry Fink: The Vanities: Hollywood Parties 2000-2009, Schirmer/Mosel
While shooting Oscar parties for Vanity Fair, Fink trades his slouchy street clothes, and per this book’s introduction, “dons a tux and moves like a shadow” among the stars, their entourages and anonymous hangers-on. Skewering the unlovely strivers of Tinseltown might seem as hard as throwing rocks at a barn, but there is method to Fink’s mischief: ignored by the players, he captures a nobody’s-eye-view of high-stakes ritual bonding that speaks volumes about the dynamics of status and the fear of exclusion. As the Hollywood of the book’s title denotes an industry, not a location, many of the photos collected here—black-and-white, printed in tritone—were shot in New York, too.

Permanent Error, Pieter Hugo, Prestel.
This haunting photo essay was shot in an enormous dump outside of Accra, Ghana’s capital, where young men drug themselves while earning a meager living extracting bits of metal from discarded electronic devices “donated” from developed countries around the world. Seen in a show last fall at Yossi Milo Gallery in New York, this recent body of work by the young South African combines portraits of the hollow-eyed scavengers displaying the tool of their trade-a long stick-with sweeping images of the smoldering landscape. The hellish district, on the outskirts of the Agbogbloshie slum, may be the final resting place of obsolete monitors, modems and motherboards, but there is absolutely nothing cyber about this space.

Rinko Kawauchi: Illuminance, Aperture.
The work of this Japanese photographer always looks better in book form, where, printed one per page and carefully sequenced, her images—delicate, intimate, reticent but never cryptic—an be absorbed slowly, and her tougher, more jolting photos can better deliver their punch. Illuminance gathers work from the last 15 years: a gangly spider; a hole in a rock, filled with water; a doll-like blossom, washed out by flash; a dead, bloodied deer by the side of the road. The book is cinematic in its steady buildup of images that create a mood, and then break it. This kind of thing is hard to sustain, but just when Kawauchi’s approach to the poetic snapshot starts to look familiar, it takes a turn for the weird.

The Radical Camera: New York’s Photo League, 1936–1951, Mason Klein and Catherine Evans, The Jewish Museum, The Columbus Museum of Art, and Yale University Press.
Should the socially concerned photographer be true to his subject, or to his medium? Before Robert Frank’s The Americans changed photography forever by reconciling the exigencies of commentary and art, members of the Photo League—Sid Grossman, Rebecca Lepkoff, Ruth Orkin and dozens of others—wrestled with their priorities. The resulting tensions tore the League apart (the McCarthy-era Red Scare only piled on the hurt), and the issue of aestheticizing social pathology remains unresolved in the diverse work of Katy Grannan, Edward Burtynsky, and the Detroit “ruins porn” of Yves Marchand and Romain Meffre.

Redheaded Peckerwood, Christian Patterson, Mack
Headlights in the distance, an ancient phone booth, a bonfire at the base of a leafless tree, a stuffed toy poodle pummeled beyond recognition, a narrow stairway to a filthy storm cellar. Dread emerges from the photos marshaled here, which relate, at times obliquely, to the teenaged serial murderers Charles Starkweather and Caril Ann Fugate. Some are original, in saturated, at times ghastly color; others, in flash-soaked black-and-white, are forensic photos (or nice simulations) of the aftermath of the gun-crazy couple’s 1958 killing spree through Nebraska and Wyoming. Patterson reproduces a few archival materials such as notes and letters, but the project’s psychological heft comes from the narrative associations that flow from the images.

Concrete Comedy: An Alternative History of Twentieth-Century Comedy, David Robbins, Pork Salad Press
Comedic art, like comedic acting, is harder to pull off than it seems. Timing is everything. Artist and writer David Robbins dates the start of concrete comedy, “the comedy of doing rather than saying,” in the early 20th century in the work of German comedian Kurt Valentin, who made expressly comic objects for display. Duchamp, Warhol, Manzoni and Maurizio Cattelan are among the artists in the lineage, along with performers like the Ramones and Frank Zappa, who adopted comic personas, and occasional comedians such as Coco Chanel, who designed haute fashions based on maid’s uniforms. The author’s unassuming, slightly crackpottish voice and enthusiasm for his subject—and it does seem to be his subject, with little other literature around-makes for an engrossing read.

Richard Serra Drawing: A Retrospective, Menil Foundation
The catalogue for the exhibition seen last summer at the Metropolitan Museum (now in San Francisco, and soon in Houston) is an impressive attempt at what was surely a daunting challenge-conveying in book form Serra’s success at facilitating via drawing “a disjunctive experience of the architecture” that is its context. Installation views are helpful, as are interviews old (with Lizzie Borden) and new (with Gary Garrels), and quadratone plates that impart a sense of the physicality and nuanced authority of Serra’s omnipresent blacks.

Since ’45: America and the Making of Contemporary Art, Katy Siegel, Reaktion Books
Siegel argues that for artists working in the shadow of the Hiroshima mushroom cloud, social engagement was not a conceptual option but an existential condition. Eschewing any unifying narrative of the postwar period, the author structures her reading of history on binaries—”Black and White,” “Success and Failure,” “The One and the Many”—that embrace permanent irresolution, opening up her analysis rather than sewing it up. Her love of the sweeping, image-laden rhetoric of the American literary canon inflects her writing with subtle but insistent rhythms of ecstasy and desolation.