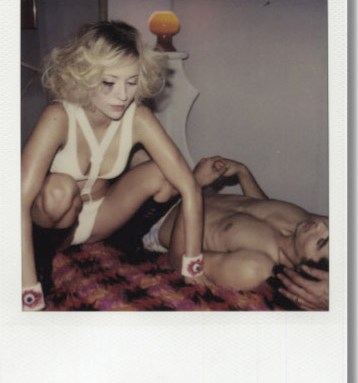 Photography is often about control. It is the photographer who decides the lighting, the design, the composition of each image. That’s why Patrick Hoelck’s new (and self-published) book is a bit of an anomaly. The unassuming 50-page Polaroid Hotel is a collection of random moments-slivers of unstaged vignettes that caught Hoelck’s eye during one of his magazine assignments. Last week, Lead Apron Gallery in Los Angeles feted the launch of Polaroid Hotel, and close to 700 people showed up. More than half of the 400 copies sold. Nine large-format, limited-edition prints from the book are on view at the gallery through May 20th.

The teenage Hoelck began his career directing music videos in the 1980s. In 2002 he self-published Tar, a raw, unfiltered photographic account of the drug addiction that marked his early years in New York. Tar propelled him, virtually overnight, into the world of still photography. Self-taught, Hoelck quickly gained momentum as a commercial photographer, shooting the likes of Clint Eastwood and tattoo/graffiti artist Mister Cartoon for everyone from Entertainment Weekly to Rolling Stone. Polaroid Hotel is a departure for Hoelck. He explains in the book’s foreword: “It’s unpredictable! You never know what’s going to happen. All the other stuff I do is very intricate, the lighting, everything. I’m very much in control.” Yet here, Hoelck relinquishes that power, at least for a split second. It’s reality at its simplest: candid and untouched.

SUSAN MICHALS: What kind of photographs did you choose for Polaroid Hotel?

PATRICK HOELCK: It’s a compilation of specific moments from my life from the past 17 years. I had about 2,000 photos in total. Whenever I enter a room, or go on location, I’m drawn to something immediately. It could be a heater coil, or your fingers. I shoot reactively-I don’t have a deep reasoning for what I photograph. I always seem to wander around when I’m on a job. I’d take all these Polaroids and then just put them away. I called it Polaroid Hotel because so many hotels have pictures of nothing on the walls, and I thought it would look so much better if they had Polaroids up instead; the name just stuck. I also made this book because I’ve been working on another photo book for five years, and it’s been slow to finish.

SM: Are you referring to your long-awaited coffee table book?

PH: Yes. It’s a huge project. I’ve shot 330 women for the book and I’ve written about 4,000 short story/prose pieces about where my life’s at. Eventually it will all be edited together. If I was a school kid, this would be my thesis. I’ll just know when it’s finished. I’ve also made a feature film (Mercy), and worked on a ton of other projects since I began the book. I don’t know how five years have slipped by; it was supposed to be a one-year project. But I just keep doing what’s in front of me, and what’s in front of me is taking me five years. I haven’t self-published a book since Tar in 2000. That was good for me; I went from being a music video director to a still photographer overnight, and I never went back.

SM: Polaroids to me represent a bygone era. It must be difficult to get your hands on that kind of film these days.

PH: I did this paranoid thing where I bought about $4,000-5,000 worth of Polaroid film and threw it in a drawer. I don’t think I needed to react like that, but too late!

SM: Polaroids have become trendy again. You can even download the Hipstamatic app for your iPhone to take digital photos that have a Polaroid “look.”

PH: But it doesn’t really look like a Polaroid, it doesn’t feel like one . . . it’s just not it. I use Polaroid film because when I’m on assignment for a magazine my work is very carefully lit, very precise and super thought-out. But with Polaroid film, it’s gonna be anything it wants to be when it develops, imperfections and all.

SM: Seven hundred people showed up for your book signing. What were some of the comments?

PH: People saw the book as a narrative. They asked when volume two was coming out. One cat said it was Warholian. The best was this angry hipster hanging around outside. A couple of my friends were talking to her and she said, “Is that the book? It’s a little thin.” My friend suggested that maybe I should charge by the page; her response was a flip “whatever” and she walked away. All I remember is looking down and signing for two hours. I was shocked by the sheer volume of people. I expected a couple hundred, not a concert’s worth.

SM: Your initials match the book title. Was that intentional?

PH: Never thought of that. Or did I?