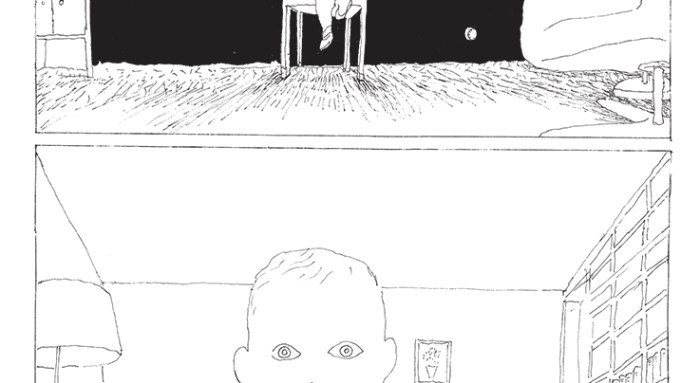 The cult comic Soft City, which will be released in large-format hardcover on October 4th from the comics imprint of the New York Review Books, has an origin story as strange as its creator. Born Terje Brofos in Oslo in 1940 and educated at the Norwegian National Academy of Fine Arts, Pushwagner traveled to San Francisco, Tangier, Paris, and Beirut. He met Bud Powell, Cliff Richard, R.D. Laing, and Picasso. At the Oslo Artists’ House in 1968, Pushwagner met the novelist Axel Jensen at the bathroom urinal. The two had an intense, short-lived relationship, and for months worked together on stream-of-consciousness comics. They took LSD and worked in cafes and at the converted home of a Norwegian sea captain. They considered their two heads to function as one.

Out of this collaboration came a half-finished draft for Soft City. In the early 1970s, Brofos changed his name to Hariton Pushwagner (Hariton for “a ton of Hari Krishnas,” Pushwagner for “pushwagons,” or shopping carts), later dropping Hariton. After moving to London, getting married and having a daughter, Pushwagner finished Soft City in 1975. Soon after, in a blurry period of his life colored by amphetamine use and money problems, the book was lost. Pushwagner claims the 269 pages that made up Soft City were stolen. His biographer says they were lost en route to Norway. After getting a divorce, Pushwagner slept on the street. For almost two years, he was homeless in Oslo. During this time, Pushwagner signed away the rights to all of his work to his assistant, Morten Dreyer.

The exact details remain unclear, but Soft City was found in an attic in 2002. After he settled in court to win back the rights to publish his work, pages from the book, alongside paintings, posters, and documents, were shown at the 2008 Berlin Biennale. On its surface, the comic shows an impersonal day in the life of the inhabitants of Soft City, a dense, highly regimented metropolis, but beneath, Pushwagner’s opus reads like a dream casting back at a horrible, cold reality. As Robert Musil writes, “Life forms a surface that acts as if it could not be otherwise, but under its skin things are pounding and pulsing.” And in Pushwagner’s Soft City, the entire world pounds and pulses.

In an introduction to the new release, cartoonist Chris Ware writes that when he first encountered Soft City, he mentally catalogued it as “The Stanley Kubrick Comic Book.” The name fits the visuals. The book is cinematic, and Ware compares Soft City to a group of films: Fritz Lang’s Metropolis (1927), Charlie Chaplin’s Modern Times (1936), Andrei Tarkovsky’s Solaris (1972), and Jacques Tati’s Playtime (1967). The skyscraper cities in these films are dense, impersonal, and often oppressive. Like them, the Soft City of Pushwagner’s imagination is a prescient vision of a future that we don’t want, but that may have already arrived.

Soft City is mostly made up of black-and-white line drawings. They’re painterly, made with an unsteady hand. Occasionally real newspaper has been collaged into spreads. An omniscient narrator speaks through floating text that appears like subtitles. The people in Soft City often think and speak in nonsense phrases similar to advertising slogans. Fantasies appear as pictures inside thought bubbles that float above their heads.

The book begins in darkness. “Good morning everybody” appears in white capital letters, and then the sun rises over a quiet apartment block. A baby named Bingo wakes up in his crib. Holding a stuffed bear, he wanders around the apartment. Finding his mother and father still asleep, Bingo walks to the window and outside sees hundreds of other apartments that look just like his own. At 7AM, the city paper Soft-Times is pushed through the mail slot. A Soft Electric alarm clock rings, waking the parents. They take a Life pill and start their day. “Good to be back in reality,” the father says to himself as he shaves.

When the father leaves the apartment to go to work, innumerable other men open their own doors at the exact same time. Packed together, they take the elevator down, get in their cars, and drive to Soft Inc. The mothers drop off their children with nannies and go to shop for Soft Meat. The book is circular: at its end, the men finish work and drive home. They watch cowboy movies and soccer matches on Soft TV. They go to sleep. The last scenes of the book show the moon setting, darkness, and the word “Goodbye.”

Pushwagner built Soft City on repetition, and repetition is Pushwagner’s genius. In this imagined dystopia, the proliferation of Soft Meat, Soft Cream, and Soft Pills precludes both difference and dissent among the city’s inhabitants. Pushwagner’s aesthetic can be seen as something of a refusal of such a future. His messy style is vital here. The obsessiveness in Soft City is near-maniacal, though both the drawings and nature of the invented world are often inexact. Even though small variations are a normal byproduct of drawing by hand, Pushwagner’s shaky and messy style means that each repeated frame carries slight yet visible alterations.

Maybe that’s why a crack always disrupts Pushwagner’s intricately constructed mirrored two-page layouts. When the fathers leave home to go to work, for example, the lines of men standing in the hallway reflect one another across the two-page spread, and recede into the distance in perspective. But halfway down the hall stands a woman whose presence interrupts the symmetry. Two pages later, the same woman, packed tight among the men in the elevator, imagines herself trying on a dress, shown in a thought bubble. In the fantasy, she’s looking at herself in a full-length mirror.

The sequence of men driving to work is an especially potent marker of Pushwagner’s style. These twenty pages take place from the perspective of a single anonymous driver. Beyond the man’s window are hundreds of other cars packed with other men. They travel down one-lane streets. Buildings rise to the top of the page and fade into the distance. All of the windows are slightly imperfect squares. The driver lights a cigarette, and his image repeats in the rearview mirror along with more cars and more men, all of whom wear the same style hat. But look closely, and they wear different expressions. One driver looks at the woman in the passenger seat of his car. One man wears glasses.

After the men sit down at their desks to work, the book cuts to the Controller. The Controller leads a different life. He arrives at the office via limousine and enters through a back door. He talks to himself in blurts of gibberish. “Soft love is a 100% bonne affair,” for example, or “Air conditioning charming value for money.” The Controller is the locus for the words that spread across the city like a plague. At his desk is a giant computer. After he gives orders to the workers, the Controller video chats with his family. His baby plays with a beach ball while his wife lounges in a bikini. When he hangs up, he changes the channel to scenes of war. He sees warships sail into the distance. He watches the factory where workers make Soft Megaton 4T rockets. As he turns away from the computer, the narrator asks, “Who controls the controller?” The question isn’t answered.

“Words are like viruses,” Pushwagner says in a 2011 self-titled documentary directed by Even Benestad and August B. Hanssen. Today, at the age of seventy-six, Pushwagner’s face is sunken. No matter what tea he drinks in the morning, he says, he gets diarrhea. Vodka is one of his small pleasures in life. With his body now failing, for the first time in his life he is experiencing real artistic success. He acts cagey in the movie, and moves constantly. When he can, he controls the shots and tells the director which props are best for him to hold (paintbrushes, for example, or a book of letters by Lord Byron). In one scene, Pushwagner stands by Axel Jensen’s deathbed. Jensen is hooked up to tubes. Standing beside his dying friend, something about Pushwagner changes. He becomes still, and his mask seems to drop. He begins to reflect on his own mortality. Considering the difference between Pushwagner and Terje Brofos: “One writes the checks,” he says, “One cashes them.” One is a dying body. One is going to live.