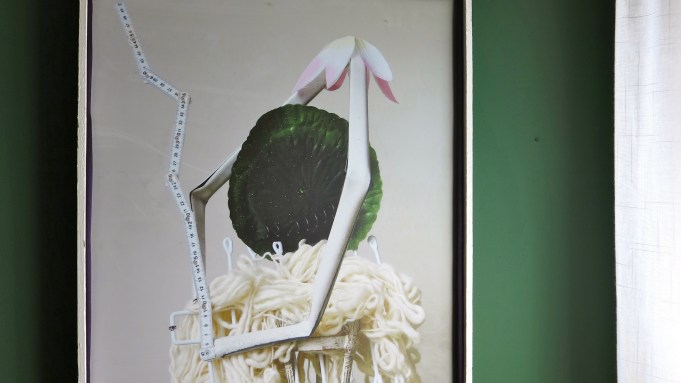 Brinkmann calls it La Hütte Royal, a compound of German and French words to mean “The Royal Hut.” It took Brinkmann and his helpers two years to construct the domestic interior and its decor, which provides an overwhelming sensory experience. The home is teeming with rewards for the curious. Pittsburgh art collector Evan Mirapaul bought the abandoned house from the city for $9,000 in April 2012 and commissioned Brinkmann to take control. The artwork is now a permanent installation.

From the home’s exterior, it appears like any other middle-class brick house on a slanted street in the Troy Hill neighborhood (coincidentally, an area of Pittsburgh settled by Germans). The house is accessible by appointment only. Once inside, visitors encounter a hallway lined with doors, even on the ceiling, that each lead to different environments, including a basement boxing ring populated by disembodied casts of the artist’s own fists in a self vs. self match.

Wriggle through the fireplace and you find yourself down a rabbit hole of crazily wallpapered crawl spaces. Visitors become quite intimate when physically maneuvering through the tiny rooms, 15 in all on four floors. Despite the playful aspect, the maze of rooms has the feel of a survivalist’s retreat or a panic room. The ominous feeling is doubled by Brinkmann’s photographs, which hang in many of the rooms, showing costumed figures wearing faceless masks.

Squatters inhabited the home before Mirapaul purchased it. One was a DJ who left behind hundreds, possibly thousands of vinyl LPs, and these have become a recurring motif in Brinkmann’s design, such as an entire living-room set created from the cardboard album covers. The records are also incorporated into a limited-edition catalogue published by Hatje Cantz. Brinkmann inserted liner notes—including a letter supposedly written by his recently departed mutt, Ernie—into the record jackets along with the original vinyl.

Among the fabricated rooms are Brinkmann’s custom-designed wallpapers and a new film, as well as an undecorated bedroom and functional kitchen for overnight guests.

Days before the official opening of La Hütte Royal, which coincided with that of the Carnegie International, Brinkmann was onsite to welcome visitors. He told A.i.A. that he preserved some of the found-object tableaux from the squatters that he discovered on-site, although these areas are not openly identified. The installation mimics a type of folk art, especially the kind found in the rural Midwest, in which a reclusive maker has created a secret, imaginative, quirky lair. Using many materials found onsite, Brinkmann nods to this aspect of Midwestern vernacular culture and proposes his own kind of dream world.

Yo La Tengo Are Beautifully Bummed on ‘This Stupid World’