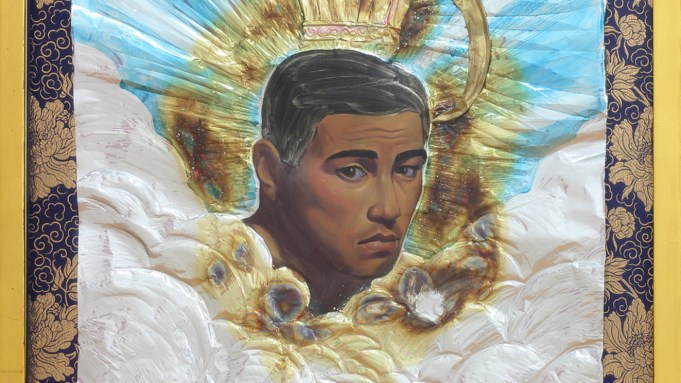 All dealers need to do a little handholding when managing their artists. Some, however, stand out for not only nurturing their stable but also inspiring them. New York dealer Hudson was one of those. Last February, Hudson, who went by only one name, died of natural causes (he was gay and had lived with HIV for years), which resulted in the shuttering of his Lower East Side gallery, Feature Inc., which had been in operation since 1984. The gallery’s near neighbor, Envoy Enterprises, has organized a brief commemorative exhibition (through Oct. 12) at its Norfolk Street space, timed to coincide with a memorial service at Judson Church, in the West Village, which took place last night.

“Hudson greatly admired Brainard, of whom he has two pieces in his collection,” Dams said of the iconic gay wordsmith, whose 1967 mixed-media collage Untitled (Pansies) is included.

Hudson famously discovered, and staged the New York gallery debuts of, artists who now are giants-Tom Friedman, Takashi Murakami, Charles Ray and Pettibon, to name a few. Likewise, he was known for cradling artists from their market infancy to critical maturity. He was especially interested in those artists whose practices convey distinct messages, such as Rene Santos, Arnold Fern and G.B. Jones. Both Santos’ and Fern’s lives were cut short by AIDS, which Hudson “spoke a lot about how much he missed their presence and their work,” added Dams.

Sexuality wasn’t merely a political force in Hudson’s collection. He bought tantric paintings, mostly by anonymous Indian artists, which have their public debut in the show. He developed a taste for these works in the 1990s. They “represent Hudson’s continued interest in the spiritual and the sexual,” said Dams.