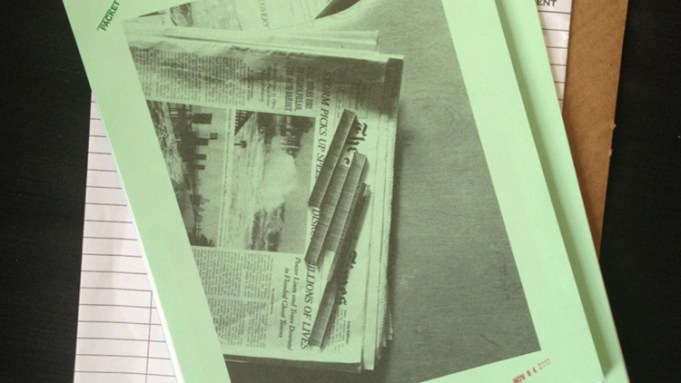 A group of eager Pratt grads, a biweekly crit, and a Risograph printer in the living room—this was the recipe for Packet Biweekly, a humble booklet of fresh art and writing that was published every two weeks since 2012. Each issue was about twenty-five pages long, and contained poems, interviews, and studio snapshots from the likes of Heidi Hahn, Joshua Abelow, Monica McClure, and Sheila Heti, bound together with a simple staple.

The editors confirmed the shuttering of their operation after eighty-six issues, the last published in October. Packet Biweekly had become a kind of Brooklyn institution, known for its rapid production schedule, crisp monochrome design, and friendly energy. A former contributor and fan, I checked in with Chris Nosenzo and Nicole Reber, two of the founding members, as well as other editors and contributors to hear their reflections on Packet’s legacy now that it’s gone.

In the early days, the collective’s members (Bridget Collins, Anthony Cudahy, Ian Lewandowski, Matt Maher, Kris Mukai, Kat Mukai, Nosenzo, Reber, and Eric Wiley) would lug their works in progress to each other’s homes. This ritual soon gave way to a desire to share these conversations with an audience beyond those physically in the room. Nosenzo had just started a day job at Bloomberg Businessweek and remembers a lightning bolt moment inspired by the magazine’s quick turnaround—he wanted to make a weekly mag too. But his friends agreed that a weekly schedule would have been too grueling, so they settled on biweekly.

This publication schedule insured that the ideas in each issue would be fresh, and prevented preciousness with any particular project. And the magazine’s style—bound by a staple (later a grommet)—was important: it was an instantly recognizable format that referenced the aesthetic of the internet but was printed on regular copy paper and assembled by hand.

One of the core ideas of Packet was the computing concept of “near real-time”: an event is transmitted immediately, delayed only by the processing time of the transmission itself. Packet aimed to be “a place for experimentation and documentation of one’s practice at as close to publication time as possible,” Reber said. They encouraged people to make work to be distributed the next week.

Other consistent elements distinguished the magazine, like the rotating cover artist “residency,” a series of six covers created by one artist, later wire-bound together as a seasonal compendium. But the most memorable aspect of Packet was its exuberant mode of distribution. Partnerships with Know Wave Radio, NADA New York, Printed Matter, and Bruce High Quality Foundation University’s MoMA Teen program made Packet both esteemed and accessible.

Distributed by hand to shops like McNally Jackson and the Whitney Museum store, the biweekly grind was a constant struggle as much as a joy. Although this was a business, at $4 a pop, “Packet was never going to make us any money,” production manager Christine Zhu said, thinking especially of the later days when they had to live and breathe Packet in order to keep up with producing one hundred and fifty copies of an issue every two weeks as well as mailing them out to eighty subscribers. “It was always on my mind,” Nosenzo added, “we were never really ahead of schedule, or even really on schedule over those four years.”

But the impact of these efforts was real for the two-hundred-plus contributors who were able to share their work in Packet’s pages. It gave artist Eric Wiley an “optimism about forging a life making art,” when not many other things did. The whimsical cover drawings Wiley made in 2014 fortified his commitment to his painting practice, which he maintains today.

“Packet was sort of like a printed surf club,” said Steph Davidson, one of the resident artists of Packet’s covers. Matt Leifheit, an early contributor, remembers it as “a nebulous project that drew in a lot of people around it, like a sticky piece of gum rolled biweekly through the Brooklyn art crowd, collecting half-finished thoughts and wild hairs.” When asked what publication is taking up Packet’s mantle, few answers came to mind. “The art world definitely needs more access points not attached to money that also do not sacrifice formal rigor,” Wiley said.

While the true currency of Packet was the friendships and relationships it fostered and relied upon, those creative collaborations are difficult to maintain. “I regret how Packet ended,” Zhu said. “It wasn’t sustainable.” “Ultimately, I’m glad that Packet folded when it did,” regular contributor Claudia Eve Beauchesne said matter-of-factly. “Many publications start off as zines and then progressively get fancier and more generic over the years. Packet stayed true to itself until the end.”