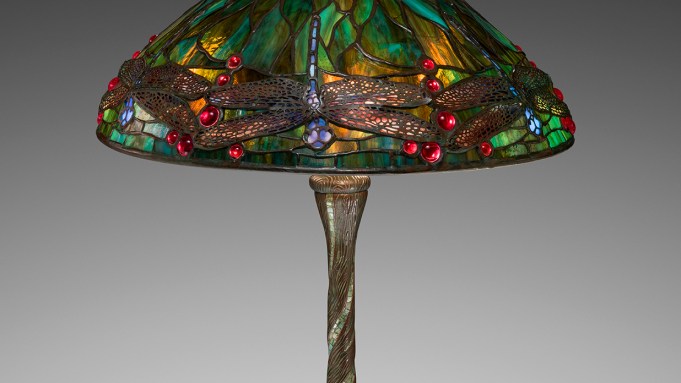 Although he first aspired to be a painter, Louis Comfort Tiffany (1848–1933), founder of Louis C. Tiffany and Company, became the Gilded Age’s leading purveyor of decorative arts. His studio produced a vast range of products, including furniture, jewelry, lamps (arguably his most famous product), pottery, enamelware, blown glass vases, and textiles—even glass buttons. The exhibition “Tiffany’s Glass Mosaics,” at the Corning Museum of Glass in Corning, N.Y., through January 7, 2018, sheds light on a less studied area of his oeuvre: panels, friezes, fireplace surrounds, and fancy goods made from mosaic glass pieces.

“You’d think everyone would know everything there is to know about Tiffany, but that’s not true,” Kelly Conway, the Corning’s curator of American glass, told me in an interview at the museum. Conway co-curated the show with Lindsy Parrott, director of the Neustadt Collection of Tiffany Glass in Queens, which jointly organized the exhibition. “What he did aesthetically with mosaics was new in the early 1880s,” Kelly added, “at the forefront” of artistic experimentation. While his famed leaded-glass lamps and windows became more standardized, Tiffany never stopped innovating with mosaics. He produced his most complex masterpieces late in his career.

At his lavish sixty-eighth birthday party, Tiffany admitted to guests that he was still motivated by a lifelong “quest for beauty.” These passions led him to experiment endlessly with the chemical composition of glass and glass blowing techniques. In his pursuit of novel aesthetic effects, he patented a type of shimmering, opalescent glass to be used for stained glass and mosaics. Then he developed his hallmark Favrile glass, which had an opaque, iridescent surface.

With these new materials, Tiffany rejuvenated a more than three-thousand-year-old art form, updating it for his “modern” age. Tiffany broke ground not just in how mosaics were composed (varied colors, patterns, and shades mingle in nonlinear arrangements of the glass pieces), but where they were placed. Their use had declined since the fifteenth century, and their development as an art form stagnated. In the US, mosaics were almost entirely absent in interior décor. The only examples—imported from Europe—consisted of simple, flat arrangements of solid colors. Tiffany’s finely detailed, multi-hued glass mosaics, showing individuated, expressive figures, became all the rage, particularly for churches.

Not content with cornering the ecclesiastical trade, this master marketer also pioneered glass mosaics for domestic interiors. By promoting his work to robber barons like Cornelius Vanderbilt II and “Sugar King” Henry Havemeyer, Tiffany made glass mosaics a must-have item for the ultra-rich. “We are going after the money there is in art,” Tiffany told his early business partner Candace Wheeler, “but the art is there, all the same.”

Perhaps the fact that the most outstanding examples of his mosaics are still installed in churches, institutions, and private residences explains why this aspect of Tiffany’s output has been overlooked by the broader public. Yet works from the Corning and the Neustadt collections, augmented by loans, reveal the scope of his virtuosity. Nearly fifty pieces spanning from the 1890s to the 1920s illustrate the apex of his achievements.

The exhibition begins with a mural-size 1927 photograph of the Tiffany showroom. The golden cords and dangling tassels of curtains in the image are echoed in the show by simulated cords and tassels made of mosaic glass on an actual column that once flanked the showroom entrance. Hanging nearby in the gallery are three mosaic panels in kaleidoscopic colors depicting peonies, a cockatoo, and parrots. Brilliantly colored blown-glass vases and mosaic fireplace surrounds show the range of products on offer from Tiffany Studios.

Tiffany was not just avant-garde when it came to reinventing mosaics. At a time when women couldn’t vote and their participation in the workforce was rare, he relied on young women to realize his stained-glass windows, lamps, and mosaics. Clara Pierce Wolcott Driscoll (1861–1944) was head of the Women’s Glass Cutting Department, designing a range of products. Although she worked for Tiffany for twenty years, until a 2007 exhibition of her work at the New-York Historical Society, it wasn’t known that Driscoll had conceived, designed, and overseen the production of the much-sought-after leaded-glass lamps that contributed greatly to Tiffany’s reputation and financial success.

In 1896 Driscoll’s department numbered between forty and fifty women with art-school training (all unmarried, per Tiffany’s order). The crew produced a reproduction of an entire Byzantine chapel interior (replete with columns, baptismal font, and an altar covered in hundreds of thousands of pieces of mosaic glass) for the Columbian Exposition in 1893. Their work won fifty-four medals, after which Tiffany was besieged by commissions for mosaic-glass works.

Pieces created by these women in this exhibition are displayed in a vitrine. Deluxe desk accessories now attributed to Driscoll include the “Poppy” inkstand (1901), the pen wiper (ca. 1902–06), and the “Swirl” pen tray (ca. 1900–05), each inset with a patchwork of iridescent glass. Two lamps credited to Driscoll have mosaic bases: the “Dragonfly” lamp (1905) with coils of mottled, green tiles snaking up the bronze base, and a rare example of the “Cobweb” lamp (ca. 1902). Since the plump base of the latter held a canister for fuel, Driscoll disguised its thickness with images of blossoming narcissus executed in vibrant mosaic shards. Clearly a luxury item, the lamp sold for $500 in 1906 when the average annual salary was $575.

An extraordinary mosaic in the exhibition, Fathers of the Church (ca. 1892), was the first panel done by female artisans. Byzantine in style with its background of gold tesserae, the mosaic shows how the Tiffany Studio substituted naturalistic images of three saints for the traditional flat, floating figures. The profiled forms have dimensionality, volume, and texture—not to mention a substantial amount of sparkling bling on their embroidered robes. As an 1898 magazine article in The Studio said of the women’s craft, “It is a real work of translation, for the color sketch does not give any guide to the shape of the [irregular pieces of glass], or to the color harmonies demanded by the nature of the glass.”

Tiffany’s mosaic figures are so realistic because they were painted with glass rather than on glass. Before Tiffany, medieval artisans used enamel paint to define difficult features like faces and hands. Shading and modeling of eyes and mouths were achieved in Tiffany’s mosaics by combining pieces of irregularly shaped, multi-colored glass, many less than one-eighth of an inch in size. Some mosaic panels required a million individual pieces, which entailed, as Conway told me “one million aesthetic choices” by his team.

A darkened gallery billed as a “Mosaic Theater” projects high-resolution color images of twelve of Tiffany’s most ambitious mosaics in situ. One tour de force is Jacques Marquette’s Expedition (1895), a narrative frieze that lines the walls of a two-story lobby in Chicago’s Marquette Building. Intricate mosaics of explorers and Native Americans, their musculature fully articulated, dazzle in their complexity and detail. The Dream Garden (1916) at the Curtis Center in Philadelphia is a 15-by-49-foot mosaic that required 260 different color tones. Tiffany wrote of it in a 1916 brochure, “It is practically a new art. Never before has it been possible to give the perspective in mosaics as it is shown in this picture.”

When the 1913 Armory Show introduced Modernism to American audiences, Tiffany’s luxury objects faded from their former grandeur as objets d’art. A new design aesthetic gained ground after World War I. Consumers traded the exuberant, decorative curves of Art Nouveau for either the streamlined, geometric forms of Art Deco or the functionalist ethos of the Bauhaus. By the 1930s, Tiffany’s lavish interior embellishments slid into oblivion, not resuscitated until their renewed vogue with collectors in the 1950s.

Ironically for a medium billed as indestructible and permanent, Tiffany’s mosaics are endangered now by more than fickle tastes. Many buildings with some of Tiffany’s finest work have been torn down, like Madison Square Presbyterian Church and St. Agnes Chapel in Manhattan. The congregation at a Chicago church with two mosaic panels has dwindled to six members, and its doors are closed. Even though the building is on the National Register of Historic Places, its fate is unclear.

What is clear is that Tiffany revived and advanced the art of the glass mosaic, pioneering new applications and inventions in methods and materials. He modernized mosaics in both sacred and secular commissions, bringing an unprecedented degree of realism to figural compositions. The man and the mosaic medium were a brilliant synthesis of extraordinary craft and aesthetic quality.