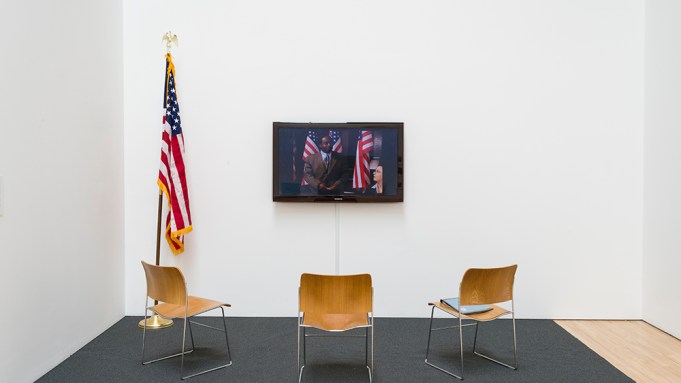 “Do you want the cosmetic version or the real deal?” The title of the Los Angeles Poverty Department’s recent retrospective poses an opposition between surface aesthetics and lived experience, between the production of artworks and the embodiment of one’s politics. First opened in 2014 at the Queens Museum in New York, and reprised this spring at the Armory Center for the Arts in Pasadena, California, the exhibition surveyed thirty years of LAPD’s practice. Initiated by the artist John Malpede in 1985, LAPD is a collective with a shifting membership of current or former residents of Skid Row, a neighborhood in downtown LA with the largest homeless population in the US. In performances and interventions into public space, LAPD tracks the echoes of the 1970s “containment policy” that effectively shaped Skid Row as we know it, as well as its imbrications with mass incarceration and, more recently, with the gentrification of downtown LA.

LAPD’s central strategy is reenactment. The group uses the city police department’s acronym for its own purposes, as if to prompt their audience to imagine what could happen if the seventy percent of the city’s resources now devoted to public safety (i.e., criminalizing the poor) went instead to social services (i.e., eradicating poverty), or if half the $100 million earmarked to relieve homelessness didn’t end up in cops’ pockets (for “enforcement”). In the video LAPD Rehearsal (Lyn Tars), 1991, the performer and sex-worker Lyn Tars recounts an experience of assault while shimmying to Madonna’s “Holiday.” The wall text reported that soon after the video was shot, Tars was murdered. The document functions both as a distressing omen and as a welcome memorial for a person whose experience might have gone unremembered. In the ongoing project “State of Incarceration,” LAPD performers present monologues based on their own experience of imprisonment. For the Armory exhibition, a bare prison bunk functioned as a set for the performance footage, which was projected on a wall. “I walk, I sit, I think,” one performer says in a reflection on solitary confinement, repeating the phrase until it curdles. Here, the aesthetic strategy of reenactment makes a three-fold impact on real life: self-reflection for the performer, political education for the viewer, class-consciousness for all those touched by the prison-industrial complex.

How do you write a history of a neighborhood that has to fight to be considered a neighborhood? How do you reflect community bonds often broken by dislocation? Police often refer to Skid Row residents as “transients,” though some have lived there for over a decade. To read a timeline about the history of Skid Row installed at the front of the exhibition space, you had to find a path around a shopping cart—a gesture that mimicked how the demands of the present quite literally get in the way of understanding the past. In an early video, from 1988, LeRoy “Sunshine” Milks gives a tour of Skid Row, pointing to landmarks at the borders of its then racially segregated populations, such as the bar where it’s too easy to spend a day’s wages. The grainy footage and its subjects’ lingo and “threads” mark the video as an artifact of the ’80s. But the most striking difference from today is the lack of real-estate development, which now encroaches Skid Row on all sides.

Debuting at the Armory, the performance and installation What Fuels Development? (2016–) centers on a recent controversy surrounding 425 Main Street, a nonprofit owned by the Skid Row Housing Trust that develops and maintains housing for the formerly homeless. Upstairs at 425 Main is New Genesis Apartments, a housing facility with addiction, disability, and mental health services. The building’s ground level, now vacant, is slated to become a restaurant for newer (read: wealthier, whiter) downtown residents, with high prices  and a “hip” menu of meatballs. The restaurant has particularly enraged activists in the community with its bid for a liquor license. The activists believe a building owned by the Trust should act on behalf of those seeking resources upstairs, rather than producing dining experiences for agents of displacement at a restaurant called Great Balls. In What Fuels Development? (2016), LAPD members played both Skid Row residents and would-be profiteers. They performed conversations and monologues based on struggles with addiction and scenes of imagined backroom deals. They also read transcripts  of the City Planning Commission’s public hearings on whether to grant the alcohol permit, echoing the strategies of an earlier work, Agents and Assets (2001–), in which LAPD reenacted a 1998 congressional hearing that investigated the CIA’s connection with LA’s crack epidemic. For the five performances presented during the exhibition’s run, the audience was seated on factory-fresh tables and chairs, as if celebrating the opening of the restaurant to be. Here, the irony of a restaurant serving liquor below recovery housing was expressed in the menu, which included free-range “Gentri-Fried Chicken” and “Open Container” (it comes in a bag!).

“Community art is a code for bad art,” Malpede said at a 1991 conference, summarizing a tension between LAPD and the contemporary art world. Surely, the materials that make up LAPD’s practice—photocopies, posters, even theater itself—take the collective out of galleries and studios and into the basements, public forums, and streets where community art actually occurs on a daily basis. LAPD worked for decades before the popularity of “social practice art”—that easily grantable, do-gooder arts arm of the state and “responsibility”-inclined private foundations, in which artists work with communities toward mostly vague purposes of “engagement” or “participation.” Rather than these cosmetic social ends, LAPD’s collaborative production of artwork produces real collective analysis. Through LAPD, Skid Row residents create forms that provide a link between actual lived experience and social structures that shape what those experiences can be. Their bad community art is good social practice only if the art world recognizes its actual position in the work. It’s the art world, not Skid Row, who needs to be taught. Two lessons, I’d wager, is that bad art can make us better, and that the revolution will not go on your CV.

How NBA Champion Tony Parker Traded the Hardwood for the Vineyard