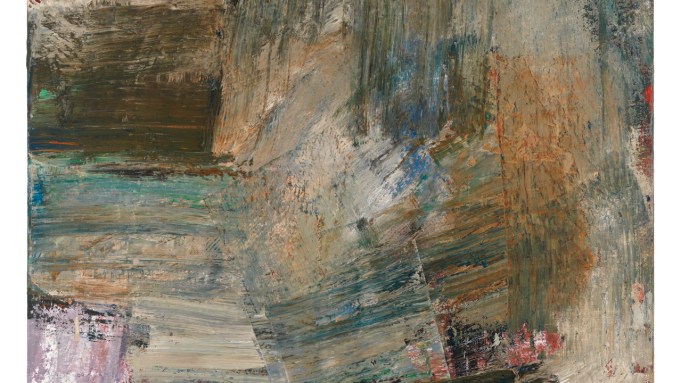 A legendary talker, Franz Kline is famous for saying that “painting is like hands stuck in a mattress.” Kline’s remark vividly conjures the image of a painter wrestling with the inert pigment in order to feel his image and bring it to life. Intensely tactile and athletic, the paintings of Louise Fishman seem to have been born of this impulse. At 73, she has spent more than 50 years pitching dynamic gestural painting up against the cool austerity of the grid. The result is an oeuvre that is resolutely idiosyncratic and canonical at the same time. In her work, the personal reveals itself incrementally through an ever-shifting abstract language invented to express the artist’s compound identity as a woman, lesbian and Jew. This desire to explore the empirical through nonobjective painting is what makes Fishman an important forerunner of much of the painting we see today.

This fall three diverse exhibitions offer an unprecedented opportunity to examine the progression of Fishman’s formal and material experimentation over her long career. At New York’s Tilton Gallery, “Louise Fishman: Five Decades” is a compact overview organized around the esthetic, personal and political touchstones of the artist’s work. The full range of Fishman’s interests is on view. “Louise Fishman: New Work” at Cheim & Read, New York, presents some of her most virtuosic paintings to date, inspired by a recent stay in Venice, Italy. Lastly, the Woodmere Art Museum in Philadelphia has organized “Generations: Louise Fishman, Gertrude Fisher-Fishman, and Razel Kapustin,” an exhibition that positions Fishman in the context of her mother and aunt, both accomplished painters in their own rights.

Born in Philadelphia in 1939, Fishman grew up in a family of artists and avid art lovers. Her mother, Gertrude Fisher-Fishman, studied at the Barnes Foundation, and her sophisticated, light-filled abstractions reflect a long love affair with French modernist painting. At 95, she has only recently begun to slow her output. Fishman’s aunt, Razel Kapustin, worked with the Mexican muralist David Alfaro Siqueiros, and, like many of her peers, started out as a Social Realist painter and a communist. Later, Jewish themes became the primary subject of her artwork. Kapustin maintained a strong aversion to abstraction, a feeling that may have been exacerbated by the later career of her volatile classmate in Siqueiros’s workshop, Jackson Pollock.

Growing up around two professionally active women artists during the 1940s and ’50s had a powerful impact on Fishman. In the postwar era, when the popular role model Rosie the Riveter was refashioned into June Cleaver, Fishman was a basketball player intent on becoming an artist. Although sculpture was and continues to be a passion, it was the liberating physicality of the gesture that eventually drew Fishman toward painting. She attended the Tyler School of Art, where she made her first abstract painting in 1961. After graduating with an MFA from the University of Illinois, Champaign, in 1965, she moved to New York City. By that time, hard-edge geometric abstraction had already supplanted the messiness of Abstract Expressionism. For a few years, Fishman dutifully worked with acrylic paint, taped her edges and thought about Kenneth Noland. While early works, such as a handsome untitled vertical stripe painting from 1970, lack Fishman’s recognizably robust hand, her signature palette—graphic black, grays and earth tones—is already very much in evidence.

It was Fishman’s involvement with the women’s liberation movement in the early 1970s that propelled her to create her first cohesive body of work. She felt the full weight of the patriarchal construct of “art history,” in particular painting’s masculinity-driven legacy, prompting her “to figure out what part of me came from all the male stuff in my history and to eliminate it.”1 The impossibility and even absurdity of this effort caused Fishman to reimagine every aspect of her studio practice, from scale, materials and supports to the very means of getting color to adhere to canvas.

For a series of intimate, somber untitled works from 1971-72, she dyed canvas in the kitchen sink, cut it into small squares and reassembled the grid by sewing it back together with thread. By approaching painting as a kind of quilt-making, Fishman gendered her materials, politicizing the given or “neutral” aspects of painting. One such piece, The Victory Garden of the Amazon Queen (1972), landed her in the 1973 Whitney Museum Biennial.

In the “Angry” series, from 1973, Fishman scrawled the righteous feelings of her female lovers, friends and comrades-in-arms across each painting, breaking yet another modernist taboo—the one against treating text as image. The works include Angry Louise, Angry Gertrude (Fishman’s mother  and Gertrude Stein)and Angry Marilyn (Monroe), all bristling with color. In the painting that names the writer Rita Mae Brown, the endlessly layered words “Angry Rita Mae” appear as receding waves of manic scribble. Although Fishman had come out in the late 1950s, it wasn’t until the early ’70s that she found her community in a group of lesbian writers and academics. Envious of their journalistic skills, she used the idea of writing to generate a new body of work in which she integrated calligraphic mark-making into the painting process.

Thanks to the sense of personal liberation proffered by the women’s movement, Fishman experienced a newfound freedom in the studio, even going so far as to return to oil painting, a rejection of the antiheroic, craft-based agenda promulgated by some feminist colleagues. “I had spent my life avoiding sewing and anything else that had to do with ‘women’s tasks,’” Fishman said later.2 As a means of creating something authentic from the orthodoxy of painting, she intensified her investigation of materials and methods, substituting palette knives for brushes and a variety of surfaces for the standard stretched canvas. Works ranged from the seductive Caryatid (1974), an oil-and-wax monochrome on shaped wood, to Navigation (1981), an oil-on-linen composition with thick arabesques carved into the dense surface.

Looking to Bradley Walker Tomlin, Mark Tobey and Pierre Soulages, Fishman continued to investigate the idea of writing. She took up meditation, and Buddhist art became an important influence on her work. Chinese calligraphy, in particular, conflated gesture with writing. A collection of loose marks functions, contradictorily, as both a structure and a disintegrative force. It is an inventive formal trope that Fishman has returned to repeatedly over the years.

The motif comes in many variations, including the primal Ecce Homo (1990), the graffiti-esque Blonde Ambition (1995) and the ravishing Longhand (2007). Most recently, in Blue for You (2010), she strips away any semblance of structure, allowing manic gestures to dominate from edge to edge.

In 1988 Fishman traveled to Eastern Europe and visited the former concentration camps at Auschwitz and Terezin, a heartrending experience that transformed her paintings once again. Over the years she had produced various works on the subject of Jewish identity, such as the wonderfully sarcastic Jewish Star Painting (1973-74), a small tondo with “Louise Edith Fishman” demurely inscribed in pink paint beneath the Star of David. Ashkenazi (1978), a striking red, white and black abstraction, employs a Hebrew name as a clue to her endeavor. Unlike the formal and material signifiers of gender that she introduced into her work during the women’s movement period (i.e., hand dyeing, sewing, patchwork, domestic scale), the ostensible markers of Jewish cultural identity are harder to identify in the arena of painting. After all, Abstract Expressionism, a movement long dominated by Jewish artists and critics, was ultimately naturalized as a triumphant American art form and represented by Jackson Pollock, a goy from Wyoming.

Fishman was deeply moved by her visit to the Pond of Ashes, a memorial built on the site of the Birkenau crematorium, and she collected a handful of silt while there. Back in the studio, she began working on paintings that would be part of a series called “Remembrance and Renewal.” The ashes were mixed into oil paint, a theatrical act that rendered Jewish identity materially present yet still largely invisible. Karpas (1988) is a group of four pale, muted compositions named for the Passover ritual of dipping bitter greens into salt water. Memorial Book (1988) depicts three skewed planes that modulate from an open book to an architectural fragment. The title refers to a kind of scrapbook published by shtetls and towns containing stories, photographs and a listing of residents who died in the Holocaust. Named for the restless, malevolent spirit from Jewish folklore, Dybbuk (1990) shows the artist playing out the mythic and macabre implications of painting with ashes. A spectral light seems to have entered the somber abstraction and shimmers from within its velvety black structure.

Fishman’s studio in upstate New York was destroyed in a fire in 1990, and she lost everything. Devastated and unable to paint, she went to New Mexico with the hope of recovering from the shock. She began spending time with Agnes Martin in her studio, and the close contact with Martin’s drawings rekindled her interest in the grid. Fishman saw that the grid could be employed as a form of meditation rather than simply a compositional device. Despite (or, perhaps, because of) the trauma of the fire, the mournful, anxious introspection that marked the “Remembrance and Renewal” paintings was replaced by a new confidence and depth of feeling. In Valles Marineris and Sanctum Sanctorum (both 1992), Fishman seems to let go of her nagging mistrust of beauty, and uses a roller to help create a luminous grid made of thin layers of transparent color.

Fishman’s paintings show the gravitas and clarity of an artist who has fully matured by the mid-1990s. The battling formal interests—calligraphy, gesture and the grid—start to hybridize into new means of structuring a picture. In recent works, it seems less and less important for her to show the labor required to “resolve” a painting. If struggle is apparent in the picture, it is now part of the content and not simply evidence of the painting process. Fishman’s worldview remains innately tough, unfazed by the pleasures of mastery. As luscious as they may be, paintings like Moon and Movies (2003) and Concealing and Revealing (2008) signal the presence of a rigorous mind. Slippery Slope (2006) and Splintering Gold (2009) demonstrate a hard-won physical intelligence that recognizes that beauty is just a heartbeat away from anarchy.

The exuberant new paintings at Cheim & Read are prime examples of Fishman’s achievement. In 2011 she spent an idyllic three months with her soon-to-be wife, Ingrid Nyeboe, at the Emily Harvey Foundation Residency in Venice. The resulting pictures are both commanding and vigorous. Bracing flashes of light keep them in constant motion. Unlike Fishman’s earlier, thickly painted images, these seem to have little gravity. Big swoops of phthalo blue, gray and mossy green dive and dance around the center of the canvases, creating pockets of air in their wake. In Serenissima, The Salt-Wavy Tumult and Assunta (all 2012), Fishman’s usual ratio of cardinal elements has been reversed—little clods of earthy pigment get caught up in a centrifuge of light, water and atmosphere.

Looking across a career spanning five decades, one is struck by Fishman’s fierce single-mindedness. By the time she came of age as an artist, the romantic individualism of Abstract Expressionism was exhausted, and even regarded as suspect by some. Yet deeply attached to gestural painting, Fishman has persisted in using her own experience to reframe its conventions and, in so doing, has produced a body of work that bristles with feeling and authenticity. The enduring value of the “long haul,” as marked by the countless hours spent alone in the studio, is what perhaps most distinguishes painting practice from the more collaborative modes of contemporary art making. Fishman proves once again that the hard-won rewards of this solitude can be glorious.

CARRIE MOYER is a painter and writer based in Brooklyn. See Contributors page.