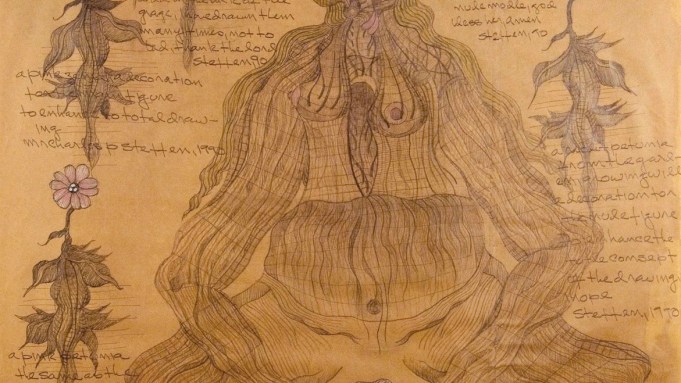 Known for spectacular views of the French Alps, the Swiss cities Geneva and Lausanne also claim lively contemporary art scenes, as proved on a recent visit. Geneva has a bustling gallery district, showing works by emerging artists as well as blue-chip examples for the well-heeled collectors who frequent this enclave of the super-rich. A spin through several local contemporary art institutions offered a taste of their progressive and adventurous programming.

In an adjacent building within the complex, the Centre d’Art Contemporain debuted the first-ever survey of works by Buenos Aires-born, London-based Pablo Bronstein (through Nov. 24). Filling one floor, the artist’s large-scale, meticulous architectural renderings imaginatively reconfigure well-known buildings, typically from the Baroque period in Turin and elsewhere in Europe. Two of his massive architectonic sculptural works occupy another floor.

In the drawings, Bronstein uses an antiquated, labor-intensive pen-and-ink technique. He assigns to certain decorative elements a symbolic significance referring to a range of social issues like notions of class and sexuality. An exploration of gay identity is rather explicit in his video works, such as Passegiata (2008), continuously projected in a small screening room, in which scantily clad male models strike campy and effeminate poses before a stylized architectural backdrop as if to counter the architecture’s perceived masculinity.

The show is one of the first organized for the museum by new director Andrea Bellini, who took on the job in September 2012. A former director of Turin’s Castello di Rivoli, Bellini told A.i.A. that “Bronstein’s approach to architecture is biological and linked to his private memory. His works speak the language of nationhood, wealth, modernity, democracy and sex.”

In nearby Lausanne, the Collection de L’Art Brut, an institution dedicated to Outsider art, presented the extraordinary first retrospective (May 23-Sept. 29) of Chicago artist Charles Steffen (1927-1995). The show was organized under the aegis of another recently appointed museum director, the Swiss curator and writer Sarah Lombardi, who came on in January 2012. It featured 50 large pencil drawings on brown paper that illuminate the twisted world view and often harrowing vision of this reclusive figure, who was afflicted throughout his life by schizophrenia and alcoholism.

The exhibition was culled from the thousands of drawings that came to light only after Steffen’s death, when some 2,000 works were found rolled up in his basement. Most of the compositions feature a single, centralized, grotesque figure accompanied by stylized handwritten descriptive captions that reveal the artist’s skewed thought processes. Selections from the survey are scheduled to appear at New York’s Andrew Edlin Gallery in fall 2014.

And Just Like That, You Can Rent Sarah Jessica Parker’s Chic Hamptons Pad for the Weekend