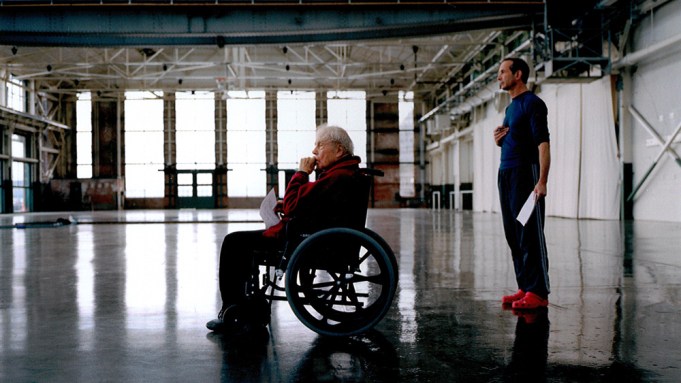 I am in the unique position of still being able to work with Merce Cunningham. I encounter him daily, listening to him and taking my cues from him, as I spend my summer cutting the film we decided to make together last year. His death has meant I have lost the pleasure in imagining him watching it, so in that sense I have lost my muse, but the film cannot change as a result of this: it is about Merce and his dancers, in a particular place and at a particular time. I am just very sad that he will never see it.

We filmed last November. Merce wanted to stage an event in the craneway pavilion of a former Ford assembly plant in Richmond, Calif., and invited me to be involved. I wanted to document his working process, so chose to film the rehearsal and not the performance. Merce loved the building, with its views across the water to the Bay Bridge and San Francisco. Albert Kahn designed the factory with continuous glass to maximize the hours of daylight, so the interior changed continually. Working boats and tankers passed in and out of the dock behind, while pelicans swooped past, mimicking the dance’s motion. A pigeon wandered around the space. Merce directed and positioned the dancers, going from stage to stage, tuning their movements. It made a stunning backdrop for one of his events. As I edit the film, I hear him laughing and singing to himself, and taking such pleasure in it all. Then in his particularly resonant speaking voice asking me, “Did you get that boat?” “Did you film that bird?” “Did you see the light behind the dancer?” And I reply, “Merce, we got it all, we got it all . . . .” Editing someone is intimate: you watch them closely, sync to the rustle of their clothing or the movement of their lips, and watch them over and over again, hour upon hour. I am spending this close time with Merce, understanding more about his process and his pictorial treatment of dance. He found his direction early and never equivocated, yet he continued to find newness in his own originality and was never complacent, nor did he tire. He remained fresh, open and elastic to its possibilities, and had rare natural grace and immense charm.

Merce believed that as an artist one should know a little about all the art forms and not just one’s own. His friendship with visual artists and composers formed and informed the path he took, as did his own work impact on theirs. The union and collaboration of Cunningham, Cage and Rauschenberg radicalized three art forms, but in the early days only made sense to visual artists. Their first audiences included Joan Miró, Max Ernst and Marcel Duchamp. Merce understood the importance and authority of the autonomous artwork, and that all three forms could co-exist to become one event or performance. But he also had his own very acute visual sense. Watching him construct Craneway Event in Richmond over three stages stretched out in the immense space was like watching an abstract painter balance a painting—detail was everything.

I first met Merce when I tentatively asked if he would be willing to do a solo performance to John Cage’s composition 4’33” for my camera, which, to my delight, he agreed to do. I turned up in New York with my small crew, with no idea of what to expect. We chose the place—his small dance studio on Bethune St.—and a chair, and then, without rehearsal, he performed. I sat like any other member of his audience on a first night, captivated and in awe. It was a static dance, exhilarating and beautiful, which caused me to catch my breath, as I did when I first saw the green ray. It was akin to being in the presence of something phenomenological.

Merce chose to hold his pose, only moving to shift his position at the end of each of Cage’s three movements. He held himself unimaginably still. Trevor Carlson, the company director, timed each movement with a stopwatch, counting down the last five seconds with his hand, which Merce perceived in his peripheral vision like a bird of prey. He performed the work six times, and I filmed it six times, and then he named the work STILLNESS, to which I asked if I could add the parenthesis “in three movements.”
Each performance appeared to hold a myriad of differences, even in its repetition. In one, he sat like Whistler’s Mother, a tableau in the film frame. In another, he stared into the mirror through smudges and fingerprints with the head of a Grecian god, framed with wild curls. Merce found form again as a performer, poised and resolved, and took wry pleasure in how he could still hold his body or hold his body still, in the companionship of a familiar partnership.

We made this work together in an afternoon: Merce Cunningham performs STILLNESS (in three movements) to John Cage’s composition 4’33” with Trevor Carlson, New York City, 28 April 2007 (six performances, six films), 2008. I showed it first at Dia:Beacon. On each of the screens, Merce was projected life-size, and all the screens sat on the floor. It was as close to emanating his physical presence in the space as possible.

I was shocked to learn that Merce had died; he always appeared the trouper, in fine form and good spirit, hiding his frailty well. His death is a rupture, the end of something irretrievable—a last contact with the American avant-garde and the generation who stretched back to touch Dada and Surrealism, and who found their form through process, experimentation and risk, and in the mutual respect they enjoyed in the relationships they made. Merce asked me to work with him again on Craneway Event. It was, and is, an immense privilege and responsibility, which might well have become daunting, were it not for his daily presence in the cutting room, and listening to his chuckles of delight from beyond the grave.

The Professional-Chess Cheating Drama Is Only Getting Crazier