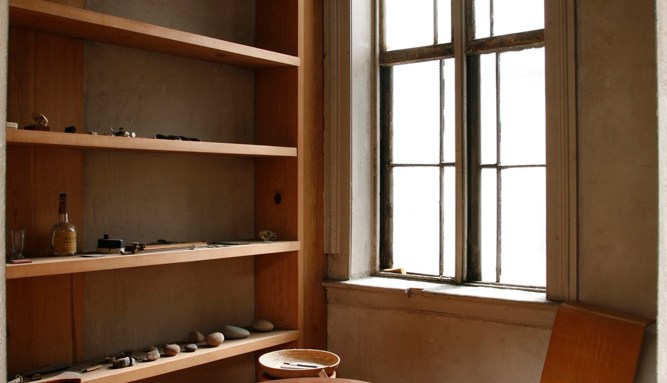 The Judd Foundation, the former home of artist Donald Judd, will open to the public this summer as a preserve of artistic integrity and precision in New York’s SoHo, a neighborhood that has come to resemble nothing so much as a shopping mall since the years Judd lived there.

The five-story building at 101 Spring Street has been under restoration for seven years in order to bring it up to code, so that the public can be allowed inside. According to architect Adam Yarinsky, who was present at a press preview today, it’s been one of the most comprehensive restorations of a cast-iron building in the country.

Judd bought the building in 1968, when, according to his daughter and son, Rainer and Flavin, also present this morning, there was trash up to your knees on the third floor and machine oil dripping through some of the floors. (The real estate broker, according to Rainer, told Judd, “You don’t deserve this building, but I’ll show it to you anyway.”) After cleanup, the family lived there full time until Judd moved to Marfa, Tex., after which he divided his time between Marfa and New York until his death in 1994.

The spacious interiors have been brought back to the condition they were in that year. Artworks by Judd as well as by John Chamberlain, Dan Flavin, Lucas Samaras, Carl Andre, David Novros, Larry Bell and Ad Reinhardt are spread throughout the building, including in a first-floor gallery, a second-floor kitchen and dining area, Judd’s third-floor studio, and fifth-floor bedroom, complete with the artist’s bed. (The fourth floor was not yet accessible today because remote-controlled robotic smoke baffles, required for fire safety since Judd removed a wall on that floor, had not yet been installed.) There’s also African art as well as antiques like a 19th-century wood-burning stove, along with much Judd-designed furniture.

This morning, when Rainer actually jumped up and down to show her excitement, Flavin cautioned her not to jump too close to a stack of bricks by Andre, Manifest Destiny (1986). “Really you can see that there’s been great improvement in the floors here,” Flavin said, “since the piece doesn’t wobble anymore.”

“Don hosted a benefit here for the War Resisters League, and invited Carl to donate a piece,” Flavin explained to A.i.A. “Carl showed up at the last minute with a canvas bag full of bricks and created Manifest Destiny. Each brick has the word ‘Empire’ on it.”

Flavin, along with his sister, lived in the building off and on throughout his youth. The third floor contains two child-bedroom-sized alcoves where they slept, and since climbing up to Flavin’s loft wasn’t allowed, he showed A.i.A. a picture of the space.

“In fact I was just showing my kids this,” he said, displaying on his phone a picture of a sinister-looking Mickey Mouse, by Claes Oldenburg, that is installed there. “They wanted to see ‘scary Mickey.'”