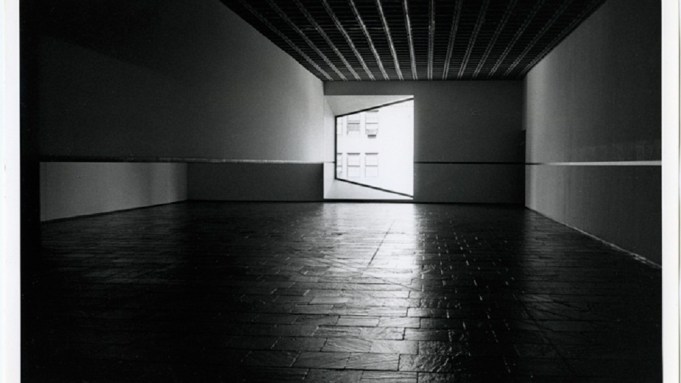 For the first time since its creation in 1977, L.A.-based artist Robert Irwin’s sculptural installation Scrim veil-Black rectangle-Natural light, Whitney Museum of American Art, New York has been reinstalled on the museum’s fourth floor (through Sept. 1).

The piece consists very simply of a vertical scrim, or translucent screen, that hangs from the ceiling and runs the length of the rectangular space, attached to the walls on opposite ends of the room. The bottom of the scrim, which is just below eye level, has a black support structure, in effect a black line marking the border of the screen. This black line is also painted on the wall, all around the room, at exactly the same level. Its width and color are echoed by the frame around Breuer’s iconic trapezoidal window. The scrim’s western edge is tethered to the edge of the window, where it catches the light, reflecting and filtering it.

Because the scrim is below eye level, the viewing eyes of others present are no longer visible when they are on the other side of the scrim; they are reduced to faceless bodies in space. Below the black border of the scrim, the world is otherwise as always, but above it, the obstruction renders the room in a variety of ways. If seen from the window side, close to the window, which is the sole light source, the scrim acquires a white opacity, but as it extends toward the interior, it becomes a translucent blur, before transforming yet again as it runs toward the eastern wall, where it turns gray and once again opaque.

Scrim veil draws attention to the empty room, as the shadows and light are filtered onto the floor, walls and the coffered ceiling.  During the most recent biennial, the Whitney emptied this same room of art, and it was used as a white-box performance space, so Irwin’s revelation of the naked architecture of Breuer’s room may be less startling to visitors now than it might have been in 1977. Still, the effect of Irwin’s intervention is both subtle and dazzling. Though facilely photogenic, it rewards being there, patiently taking the time to allow dynamic perception to occur within the space in response to its mutating light and the empirical experiment of changing the position of the spectator.

A scrim is of course a piece of stage architecture that can be lit from in front or behind to create different effects, and on which images or film can be projected. The material is designed to play with light. That Irwin also calls his scrim a “veil” suggests an association to the cloistering of women for religious purposes or the protection of their chastity. Irwin’s veil is white and might be that of a wedding, though its black border alludes to mourning.

In this exhibition, there is a kind of mourning as well, because the Whitney is giving up the Breuer building to move to the Meatpacking district in 2015. Since the piece is what Irwin termed a “site-conditioned” work and is even named after the museum, Scrim veil-Black rectangle-Natural light, Whitney Museum of American Art, New York is in mourning for itself.