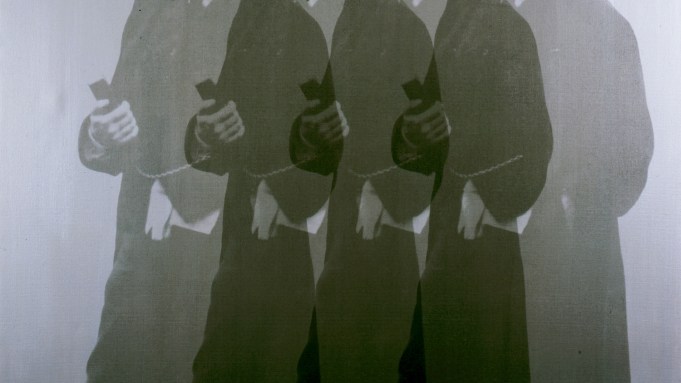 “IT’S ALWAYS BEEN my impulse to use art history as almost a ready-made,” Deborah Kass told the filmmaker John Waters in 2007.1 In her big, pop-infused paintings, however, Kass is no cool-headed Duchampian, and her borrowings are anything but polite. Coming of age in the era of the Pictures Generation, and pursuing its lessons throughout her three-decade career, Kass has pilfered details of well-known 20th-century paintings and snatched the glamour of Warhol’s stars for her own Jewish, lesbian and feminist idols (and herself ). In colorful found-text paintings, she broadcasts uncool Broadway musical lyrics as well as quotations critical of male dominance in the art world. Yet at the same time, Kass pays affectionate homage to all her sources, whether art historical or musical, and to an art-world society with which she maintains a close bond, even as she castigates it for sins and omissions. Artists, collectors and historians appear often in “The Warhol Project” (1992-2000), which includes her best-known works. Within that series, her 1998 screenprint paintings “America’s Most Wanted” present eminent (and sometimes ominous-looking) curators and critics in faux mug shots, as if they were criminals of vast notoriety rather than members of a rarefied elite.

Aptly, given her obsession with the Pop artist, Kass’s first career retrospective is currently on view at the Andy Warhol Museum in Pittsburgh, its only venue. (No stranger to the city, Kass received her BFA in 1974 from Carnegie Mellon University.) There one can see more than 90 works—mainly paintings and works on paper, but also photographs and sculptures—spanning her career, from early 1980s Marsden Hartley-esque seascapes to a recent painted aluminum sculpture (2011) that spells out, depending on how you view it, the word “YO” or “OY,” at once greeting and kvell. Such witty mash-ups invite the viewer both to disentangle allusions and experience a degree of discomfort as sometimes irritating personae (e.g., unassimilated, wise-cracking Jew; unapologetic, “angry” feminist) are introduced into a discreet cultural discourse.

Among the many portraits in “The Warhol Project,” from Barbra Streisand to Gertrude Stein, we find Kass herself appearing repeatedly as Warhol, each time adapting some of his most famous self-representations. Among them are his self-portrait from the mid-’60s in which he partially covers his face with his fingers, and which she retitles, amusingly, Portrait of the Artist as a Young Man (1994), and another from the mid-’80s in which, wearing a fright wig, he colored his face with a translucent camouflage design. Warhol’s portraits both conceal and reveal their subject. Kass compounded that effect, faithfully replicating her sources, even making
us look twice, almost convinced that we are looking at the originals. We see sly Deb Kass, the Warhol fan, a squatter in one of his big, luscious multipart self-portraits; or Deb Kass the wannabe, masquerading in the trappings of an art-world superstar. Even trickier is her self-portrait as Andy Warhol vamping as Marlene Dietrich in men’s clothing (Kass’s Altered Image #2, a photograph from 1994-95), based on a 1981 photograph by Christopher Makos, Warhol in Drag. Presenting herself—a woman and a lesbian—as a gay man vamping as a woman vamping as a man, she manages to thoroughly muddle distinctions of gender and sexuality, as well as to promulgate a fresh persona, flagrant and droll.

Previous to the Warhol series, Kass was already mixing herself into selected lineages, though her hand was more readily apparent. Her images from the late 1980s, more expressionistic than Warholian, sit restlessly on the canvas. Composed mainly in vertical bands punctuating a broad horizontal format, the paintings shuffle the styles and motifs of other artists with details from Kass’s own earlier work. In Table of Contents (Part I), 1988, for example, we quickly recognize Frank Stella’s stripes and a flying brick from George Herriman’s Krazy Kat comics, though not so readily the rocks and crashing water from one of Kass’s own paintings from the early 1980s.

Kass’s father, a dentist, was a jazz aficionado and amateur musician, and she grew up on Long Island hearing great covers, as she told Irving Sandler: “In my house there was only one kind of great art and it was jazz. There was this idea of ‘standards’. . . . So I grew up thinking that interpretation was completely within the realm of being a great artist.”2 Besides Stella and Herriman, Guston and Pollock are favorite sources in what she calls her “Art History Paintings,” and, as time passes, women painters like Lee Krasner and Pat Steir. A solid pink band recurs, as much a clicheÌ allusion to feminin- ity as a quotation of Guston’s signature color. We find that pink stripe, for example, in Call of the Wild (For Pat Steir), 1989, falling to the right of Steir’s blooming rose and Krasner’s looping ovals, and to the left of a depiction of Charles Schulz’s Lucy, from the Peanuts comic strip, her mouth wide open in a cry of desperate frustration. Kass had begun to assert her feminism in paintings like this one, which rages at the neglect of the women she admired. Upon her return to New York in the mid-1970s, Kass had been deeply impressed by women painters she had known little about during her years of art schooling. She remarked to Waters:

It was very clear to me that there was something new from a formalist point of view: a new, female subjectivity. It’s quite stunning to think about all the women who were painting in New York and all the men they’ve influenced. When you say Julian Schnabel, I think Joan Snyder. Ross Bleckner, I say Pat Steir. In Carroll Dunham, I see Elizabeth Murray.3

KASS’S WARHOLIAN MOMENT occurred in 1991, with the painting Before and Happily Ever After. At the top of her composition, Kass copied the peculiar painting Before and After (1961), in which Warhol reproduced a diagram of a nose job. She has said she was fascinated with that painting from the time she first saw it reproduced, at age 13.4 In the lower part of her canvas is a detail of Prince Charming slid- ing the glass slipper on Cinderella, from the Disney animation. Rife with irony, and perhaps a bit overly obvious, the painting nonetheless suggested a way forward. In fact, Kass’s prime player in “The Warhol Project” is Barbra Streisand—she of the proud, unrevised Jewish nose. As a child, Kass had admired the pop star, against the grain of her assimilationist upbringing; she was wild for Streisand’s Jewish glamour, for her rebel beauty and big voice, and decided to remedy her marked absence in Warhol’s pantheon. Within “The Warhol Project,” she cast Streisand in what she called “The Jewish Jackie Series,” in which the star’s famous profile appears in images based on Warhol’s Jackie Kennedy, and in yet another series (“My Elvis”), deploying the image of Streisand as the cross-dressing rabbinical student in the film Yentl (1983), duplicated within the frame like Warhol’s Elvis Presley as a gunslinger.

One of Kass’s early text paintings, from 2003, is in Yiddish; popping in puffy, raucous, Guston-pink letters, it translates as, “It’s hard to be a Jew” (Hard To Be a Jew). Kass has told me on several occasions that she finds her Jewishness—at least her brand of in-your-face Jewish- ness—to have been more of a problem in her career than her being a lesbian. There are plenty of Jews in the art world, but they tend not to flaunt it, whereas she often makes Jewishness the direct subject of her work. Few other artists—Cary Leibowitz being a notable exception—do the same. In a perceptive essay, the art historian Griselda Pollock situates the artist in the lineage of Jewish writers for whom “adopting the position of pariah was a way to acknowledge knowingly the delusions of identity and to accept the fragile sets of relations and positions that were always to be negotiated.”5 In addition to selected contemporary art-world figures, Gertrude Stein became a favorite subject for Kass (in the “Chairman Ma” paintings, for example—a riff on Warhol’s images of Chairman Mao). Sandy Koufax, the Jewish baseball star, to whom Kass is distantly related, makes an appearance, along with Kass’s grandmother, Jeanne Kaufax. The final paintings in “The Warhol Project” are of Kass as Elizabeth Taylor (for example, Red Deb, 2000), the only self-portraits in the series in which she did not represent herself as Warhol, but rather as “this nice Jewish lady,” as she characterized Taylor in an interview. 6

During the past decade, Kass has used text to insinuate multiple artistic identities into her paintings. Still citing past art, in particular hard-edge abstraction, she combines her visual quotations with lyrics from musicals and the favorite pop songs of her youth (by Laura Nyro, Sylvester, et al.), statements by artists and random phrases, forging an indissoluble relationship between form and content. The words, in a variety of fonts, melt seamlessly into painted riffs on Frank Stella and Ellsworth Kelly. This infiltration of what is often considered middle- or low-brow culture—Sondheim and Funk—into high is no less a messing with the status quo than Kass’s earlier positioning of marginalized figures as glamorous stars—and in some ways constitutes a more formally original solution than her Warhol paintings.

“Daddy I would love to dance” reads the explosively colorful diptych Frank’s Dilemma (2009), and those words from A Chorus Line, articulated in rainbow-colored stripes, seem to perform the titular deed, boogying in and out of Frank Stella’s Sunset Beach (1967). Kass, for whom the phrase is particularly resonant, first painted it in 2005:

I was listening to A Chorus Line over and over on the day I turned 47, and every time I got to track 3 [“At the Ballet”], and at the lyric “Daddy I would love to dance,” I started crying. And I had been listening to this thing for years, and I didn’t know why on that day of my birthday I just kept losing my shit. . . . At seven o’clock at night, I was on the phone with a friend, and I realized that my father died at 47, and this was my 47th birthday. . . . I had utterly suppressed this fact that haunted me my whole adult life. And you know, once I started the new work, those words were on the very top of the list. I had no idea how to make that into a painting. It took five years, and then one night I dreamt the painting.7

Kass often recalls how, as a teenager, she used to skip out of the Art Students League, where she began her art studies at age 15, to visit MoMA or sneak into a Broadway play. As flashy as the marquees in New York’s theater district, yet redolent of a deep knowledge of modern art history, Kass’s text paintings represent the culmination of these early influ- ences, a memory palace of her life in art.

2    “Deborah Kass by Irving Sandler,” Bombsite, September 2010, bombsite.com. When John Waters suggested she was “sampling” in her art, like hip-hop DJs, Kass responded, “I have felt that way about my work since the Art History Paintings and that’s exactly how I talk about my work. And I go further back to jazz, where it’s called covering.” “John Waters Interviews Deborah Kass,” p. 176.

4 Irving Sandler, “Deb Kass: Do Something Special,” in Deborah Kass: Before and Happily Ever After, p. 13.

5 Griselda Pollock, “Making Space for Myself: Taking a Closer Look at Deborah Kass,” in Deborah Kass: Before and Happily Ever After, p. 129.

CURRENTLY ON VIEW “Deborah Kass: Before and Happily Ever After,” at the Andy Warhol Museum, Pittsburgh, through Jan. 6, 2013.

Like Their Cult Leader, Jan. 6 Rioters Try to Cash in on Attempts to Destroy Democracy