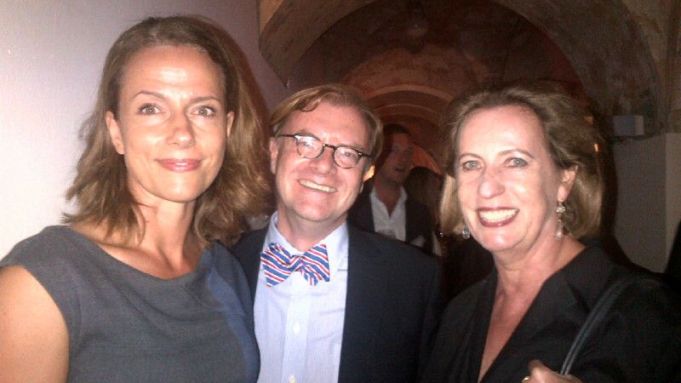 Parties and gallery openings abounded in the run-up to this year’s abc, the exhibition-like fair that takes place annually under the umbrella of Berlin Art Week. With 129 galleries paying just over $4,500 per artist presentation, this abc installment (Sept. 13–16) boasted three halls under one roof (Station Berlin, in the Kreuzberg neighborhood) tallying roughly 20,000 square feet.

There were no curatorial restrictions—last year the paintings were selected by curator Rita Kersting, while the year before the focus was on moving images—which was a welcome change for galleries like Kicken Berlin, which brought a first-rate selection of photographs by Götz Diergarten, Jitka Hanzlová and Hans-Christian Schink.

Exhibition makers were provided site fencing and scaffolding to serve as dividers and backdrops for their sculptures, paintings, installations and projections—a choice that worked surprisingly well.

“The artist had actually requested to use scaffolding to display his work before we knew of the abc’s exhibition architecture,” Sacha Welchering, director of Berlin’s Jan Wentrup, told A.i.A., referring to the new paintings of Florian Meisenberg, three of which sold for a total of around $40,000 on the first day.

Berlin collector Ulrich Köstlin was impressed by the fair and by the work of Meisenberg, whom he numbered among his discoveries at abc. Others included Neil Gall at Aurel Scheibler and Anna K.E., represented by Barbara Thumm.

Buchmann Galerie, from Berlin, brought a breathtaking installation by Wolfgang Laib. Consisting of roughly 2,000 heaps of rice and two chunks of Indian granite, it was priced and unsold at over $500,000—among the most expensive works on display.

With a pricetag in the region of $350,000, Michael Joo’s large installation Untitled (Santiago, 7.9,11—v 1.0), 2012, which comprised six paint-splattered mirrors in the form of riot police shields hung in a horizontal row on the wall, recalling a line of riot police charging into and dispersing a crowd. The work was on view at the tradtional booth-style display of London’s Blain Southern, which opened a branch in Berlin only a year ago.

Most of the collectors who visited abc were German, but Carlier Gebauer sold out the entire presentation of paintings and collages by Kirsi Mikkola for over $52,000 to a non-European buyer.

Although abc was founded for Berlin galleries, a few international big guns showed their wares. Antwerp heavyweight Tim Van Laere brought a selection of works by Kati Heck, which he presented in a cluttered studio-style booth. Upon his arrival, he had already pre-sold Heck’s large-scale painting Gretchenfrage (2012) to an American collection for roughly $24,000, on the back of the anouncement of his participation at abc.

Although herself in absentia, Maureen Paley had her name was on the list of participants of abc this year. The London dealer shared a presentation of recent works by David Thorpe with Meyer Riegger (Berlin), which was somewhat surprising, given that Jochen Meyer was on the Art Basel selection committee this year and Paley was not among the dealers chosen. Max Hetzler’s display of a new large-scale sculpture by Mona Hatoum remained unmanned for most of the four days, raising questions about the Berlin dealer’s committment to an exhibition format he co-initiated half a decade ago.