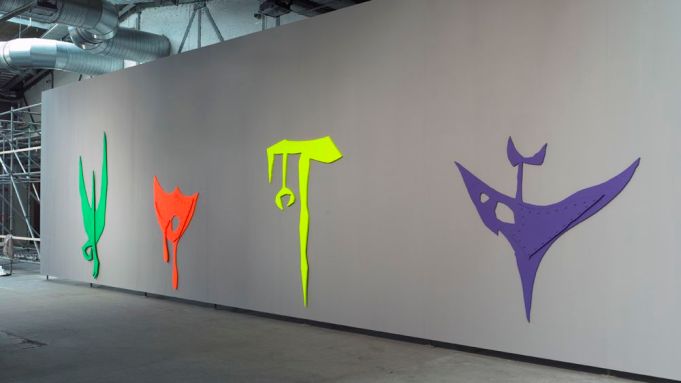 A low-key cheerful mood prevails at the attractively regrouped and revamped abc Art Berlin Contemporary, which opened at Station Berlin in the city’s Kreuzberg neighborhood [through Sept. 16]. As the organizers explained to the press, whom they seemed to suspect had come expecting otherwise, theirs is not a “fair” but an “exhibition.” While the faintest whiff of commerce, only “gallerists”—not dealers—participated. Each booth is designated by the featured artist (solos only) and not by the gallery name, which is in fine type.

More than half the participating 126 galleries are from Berlin, but some are from as far away as Seoul, Jeddah and Cape Town. Selection was made by an organizing committee of nine Berlin venues (Galerie Guido W. Baudach, Mehdi Chouakri, Galerie Kamm, Klosterfelde, Meyer Riegger, Galerie Neu, Neugerriemenschneider, Esther Schipper and Zak Branicka), according to criteria that were not specified.

The righteous sublimation of commerce would be exasperating were it not for the fact that the fair is so much fun, with many fine installations and understated design-entirely green, as the organizers were quick to inform the press. Absent are the usual white booths; the plan is open in this industrial space, and artists have at times been challenged to devise ingenious methods of display, such as ad hoc scaffolds and easels made of pipes, for normally wall-hung works. “It’s all very Berlin,” commented Magnus Edensvard, director of London’s Ibid Projects, as he righted a component of a David Adamo installation kicked over by a passerby.

Artist’s Space from New York was invited to create a “bazaar” in which goods and ideas are exchanged; on opening night, Sept. 13, their section took on the air of a party. Berlin’s Independent Publishing also offers the coyly titled “MISS READ,” a fair-within-the-fair of artist’s books and publications.

With money and sales barely mentioned, it seems almost crass to compile a list of picks. Accordingly, here is mine. (Visit the “fair” from 11 to 8 on Friday and 12 to 7 on Saturday and Sunday.)

KIRSI MIKKOLA, ROSA BARBA and EMILY WARDILL at Carlier Gebauer, Berlin. No, they are not mixed up together in this solo-only fair, but the venerable Berlin gallery has taken three separate booths at abc, more than any other dealer from the city. All three are worth visiting-Mikkola for her collage MUM, made of tiny painted and found paper fragments composed into a dense, sweeping (280 by 270 mm) abstraction; Barba for a typewriter-cum-projector that automatically types a letter then quaveringly projects it onto a tiny screen; and Wardill for a film in which a pompous professor with an inscrutable agenda leads his students in exercises with an erotic undercurrent.

AARON CURRY at VeneKlasen Werner, Berlin. This current darling of blue-chip collectors contributes four new flat, wall-hung reliefs that look something like tools, something like raptors. Powder-painted in fluorescent colors on two kinds of aluminum, they are hung on the grayish outer perimeter of the fair, where they glow in the changing ambient light. I’m not generally a fan, but these are super.

DAVID ADAMO at Ibid Projects, London. A poet of the unfinished, Adamo was consigned to the heavily trafficked steps in front of the fair’s café, where he set up an installation of his roughly carved totems and floor pieces in a scattering of chips and shards. Upon one of the long floor pieces, he arranged partially used erasers, various brands and colors, in a little row.

SONJA FERLOV MANCOBA at Galerie Mikael Andersen, Berlin. in a fair rife with nostalgia for early modernism, this exhibition of a relatively unknown modernist pioneer fits right in. Sonja Ferlov Mancoba (1911–1984) was a Danish sculptor whose cast bronzes unapologetically embrace a primitivist vocabulary. Non-Western masks and blunt deities are adduced in the generous grouping of modestly scaled works on view at Andersen, which represents the estate.

HELMUT FEDERLE at Galerie nächst St. Stephen Rosemarie Schwarzwälder, Vienna. For the largest of three new paintings on view here, Untitled NSG, Federle turned to a sketchbook he published in 1983, Arbeit der neuen Ordnung (NSG II) (Work of the New Order). With its jumbled geometry wafting over the surface, the painting, a black silkscreen on gilded aluminum, feels wonderfully extemporaneous and fresh. The smaller paintings on canvas are redolent of early modernism, when spiritualism held sway. Federle is currently preparing for a retrospective of his small paintings in Lucerne in 2013.

TIMM ULRICHS at Wentrup/Berlin. The German conceptual and installation artist and poet Ulrichs, now in his 70s, is-unfortunately-little known outside his own country. At abc, he has installed a fourth iteration of his Concert of the Doors, an elaborate construction from 1989 in which visitors pass through a mazelike space. Old doors along the circuit automatically open and close, creaking loudly on their hinges (which are amplified). “I have always admired Edgar Allan Poe,” said Ullrich, who was present at on opening night. He says that he enjoys the sound of the creaking, which reminds him, say, of a tomb yawning for an occupant. Is he glad to be included among so many younger artists at the fair? “To be honest, I hate almost everything here,” he said.

EDDIE MARTINEZ at Peres Projects, Berlin. I admired the American Martinez’s works in a group show at Greenberg van Doren in Manhattan this summer, despite that part of me that railed against a blatant re-do of early Abstract Expressionism. Here? Now? Even the title of this series, “American Native,” a series of roughly 6-by-11-foot abstract paintings, speaks volumes. Still, the paintings are incredibly seductive, with their grand, monumental figures picked out in bold black lines and a crusty, aggressive impasto. Suspending disbelief, I surrender.

ANNA K.E. at Galerie Barbara Thumm, Berlin. More big abstract paintings, this time resting in a great triangle on freestanding planks in the center of the room, by Anna K.E. Here we have a very contemporary self-conscious stroke in the form of some rather droll videos playing on small monitors nestled at the base of the triangular installation, which have the artist wrestling with a mattress and moving around her studio with her pants partially pulled down, butt exposed. Juvenile, perhaps, but the videos are a rather a hilarious pendant to the big, Thomas Schütte-esque abstractions above.

All Eyes on Med Spas