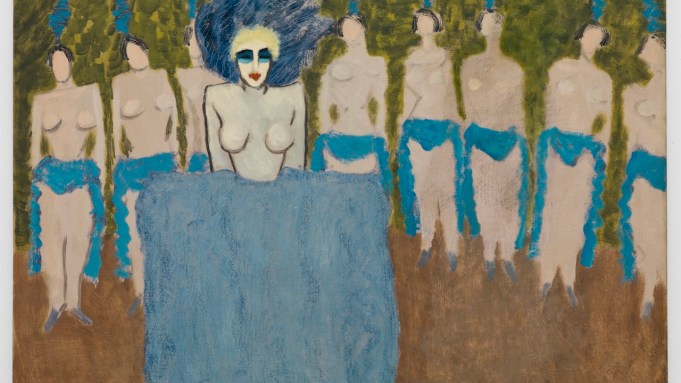 The Art Show, an annual fair organized by the Art Dealers Association of America (ADAA), launched last night with a glitzy benefit preview at New York’s Park Avenue Armory. The party marked the beginning of a busy week in the city, with the Armory Show, the Independent and newer fairs rounding out the roster.

The VIP hour saw an array of art world professionals. A troika of New York museum directors were in attendance: Glenn Lowry (MoMA), Arnold Lehman (Brooklyn Museum) and Adam Weinberg (Whitney Museum). There were artists such as Kiki Smith, whose works are at Pace’s booth, as well as behind-the-scenes players like Sandy Heller, art advisor to Steven Cohen and Dasha Zhukova, among others. And of course there were collectors, like Alberto Mugrabi and Glenn and Amanda Fuhrman.

Now in its 25th year, the fair this year hosts 40 solo artist booths and 32 thematic exhibitions. In other round numbers, ADAA turns 50 this year.

All or Nothing at All (2013) is a sculptural installation by Jannis Kounellis at New York’s Cheim and Read Gallery. Playing up the booth’s limitations, the work forms a wall at the very front of the space, forcing a staffer to stand in the aisle in front of it. Part of the wall is made from antique sewing machines, part from chunks of coal and stone, all found in the last few months, while the Rome-based artist has been here in the States.

“The work is named for a Billie Holliday song,” the gallery’s Adam Sheffer told A.i.A., “because she’s so iconically American, the artist thinks. It’s scaled to the booth, but it’s also a discrete work of art that could be seen in the round. It works partly because it’s so unexpected here.”

303 Gallery’s area was fitted out with antique furniture and a chandelier, and the dark blue walls receded behind brightly hued and brightly spotlit canvases by Karen Kilimnik, showing landscapes and images of children. According to a gallery staffer, prices range from $80,000 for a small painting in Delft blue to $350,000.

At Sean Kelly Gallery, portraits of New York art world figures by Robert Mapplethorpe hung against burgundy walls. Ranging from an affordable $8,500 to $100,000, the subjects include Francesco Clemente, Ellsworth Kelly, Keith Haring and Yoko Ono. “The Brice Marden is from 1976, the year after he had a Guggenheim show at a ridiculously young age,” the gallery’s Maureen Bray told A.i.A.

Other Gotham dealers have quieter but impressive presentations.

PPOW is showing works from the 1980s by New York painter Martin Wong, who died from an AIDS-related illness in 1999. His work has also been re-contextualized lately by artist Danh Vo, who has shown works by Wong alongside his own. Resting on the floor is a television set with a trompe l’oeil brick wall painted on the screen. “Martin was kind of known for those, though he didn’t do too many of them,” Wendy Olsoff told A.i.A. “He was kind of prescient about the screen—and how we need to not look at it.” Paintings of a bombed-out Lower East Side struck a contrasting note in the high-toned setting.

Gladstone Gallery is showing paintings and works on paper by Bay Area artist Robert Bechtle. “He continues his interest in light and automobiles, especially San Francisco light,” said Barbara Gladstone. “It’s a constant vision, which is comforting,” she added. She declined to discuss prices, saying only, “I hate prices.”