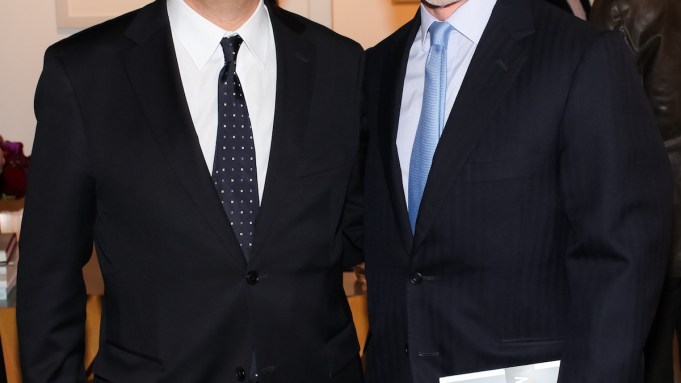 On the day that Republican voters in 10 states went to the polls, the art world had its own Super Tuesday. The Art Show, an annual fair, organized by the Art Dealers Association of America (ADAA), kicked off last night with a swank benefit preview at the Park Avenue Armory.

Museum patrons Eli and Edythe Broad and investor Wilbur Ross were among the collectors surveying the wares of the 72 member exhibitors.

This morning, blue-chip vendors Pace Gallery and David Zwirner announced that their booths had already sold out.

At the Park Avenue venue, visitors first encounter a collegial smackdown between two galleries capitalizing on museum exhibitions for their artists. Metro Pictures offers “Murder Mystery” collages from 1976 by Cindy Sherman, currently the focus of an acclaimed MoMA retrospective. Across the aisle, Marian Goodman’s booth presents mostly black-and-white photographs by Francesca Woodman, featured in an upcoming survey at the Guggenheim.

The Shermans range from $75,000 for single-panel collages to between $200,000 and $400,000 for multipanel works. Several of the multi-figure collages had been sold partway through the evening, according to Metro’s Tom Heman.

As for Woodman, Goodman’s Lisa McClure said, “It’s a very nice moment for Francesca’s work.” Small prints were available for $32,000 and a large diazotype for $200,000.

Shoppers seeking a more modest price point could find their way to the booth of Crown Point Press, which has an abstract Amy Sillman work (in sugar lift, etching and aquatint), O & N, available for just $3,000, as well as a set of six Mamma Andersson and Jockum Nordström works (aquatints with etching) showing multiple figures, available for $14,000 for the set or $2,800 each.

Dealer Betty Cuningham hung six large Philip Pearlstein nudes, dating from 1991 to 2011. The diminutive 88-year-old painter chatted amiably with visitors, joined by the tall blonde artist Desirée Alvarez, who modeled for him starting in the late ‘80s. “It’s the one job I miss,” said Alvarez, who appeared in one of the early canvases on view. Pearlstein’s works are priced $120,000 to $300,000.

By 7 P.M. the gallery had already sold an “extremely rare” set of Cy Twombly monotypes for an undisclosed price.

Dealers were positive in their impressions of the show. Christoph Gerozissis of Chelsea’s Anton Kern Gallery, which had a solo presentation of Matthew Monahan, observed, “It’s only our first time doing the Art Show. It’s very pleasant. I only have the frantic contemporary fairs to compare it with.”

Lehman Maupin is showing gallery artists Billy Childish, Klara Kristalova and Mickalene Thomas. Standing by a colorful large painting of an interior by Thomas (her large works start at $75,000) with applied Swarovski crystals, David Maupin took a moment to chat about art fairs. “I used to hate them,” he admitted, “but about 10 years ago curators started to say they loved to attend, and you started to see more curated booths. I think that this year people really made an effort.

“In any event,” he concluded with a smile, “art fairs are here to stay.”

See the rest of the photos.