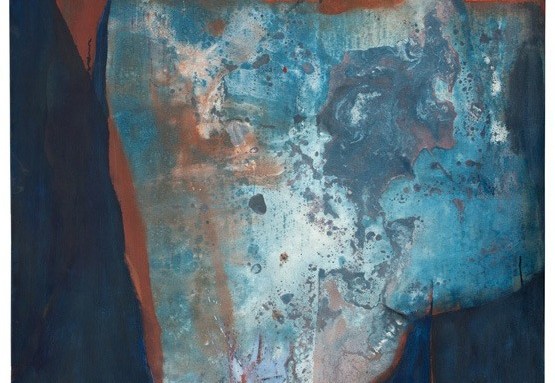 The Art Show, the annual event on view this weekend, Mar. 7–11, at the Park Avenue Armory at 67 Street in New York, put on by the Art Dealers Association of America, is nothing more and nothing less than an unapologetic, self-congratulatory celebration of this exclusive club. Some of the nation’s top dealers are here, and they aim to impress the public with quality offerings as well as try to prove that there really is such a thing as art-world camaraderie in the cut-throat business of blue-chip art sales. And it’s all for a worthy cause. The event’s opening night festivities raise millions of dollars to support the many charitable endeavors of the Henry Street Settlement.

In years past, the dealers presenting solo exhibitions at The Art Show were few and these were often the standout displays. This year, solo shows seem to be in the majority among the 72 exhibitors. The most striking included Dorothea Rockburne at Greenberg van Doren, Yoshitomo Nara at Pace, Elad Lassry at Luhring Augustine and Carla Accardi at Sperone Westwater. Despite the risk of over-exposure at the moment with a retrospective packing them in at MoMA, Cindy Sherman was Metro Pictures’s star of choice. Marian Goodman offered a sneak preview of the upcoming Guggenheim survey of the late photographer Francesca Woodman. Dave Muller’s “Beatlemania” works filled Gladstone and Anthony Meier Fine Arts booths. And Tanya Bonakdar presented a tantalizing glimpse of what we might expect from sculptor Sarah Sze when she represents the U.S. at the Venice Biennale next year. Some of the most engaging exhibitions at the fair this time, though, were group shows. A substantial number of these appear on this year’s list of The Art Show Top 10.

1.)    Matthew Monahan at Anton Kern
For some artists, reimagining the figure is like reinventing the wheel. It’s a seemingly useless enterprise that’s bound to fail. But Matthew Monahan is one of a handful of young sculptors who in recent years have accepted the challenge and won. Against all odds, he seems to have arrived at a new vision of the human form, especially in monumental scale. This tightly edited selection of Monahan’s recent sculptures and works on paper, offered a convincing overview of the California-based artist’s achievement. The monumental bronze heads on pedestals, with their art-historically drenched distortions—melding Rodin and Raymond Duchamp-Villon—were the Art Show’s prime showstoppers this year.

2.)    Lynda Benglis and Adam Fuss at Cheim & Read
This unlikely pairing of sculptor and photographer in “Benglis/Fuss: Knots and Entrails” turned out to be one of the fair’s high points. Benglis’s familiar, colorful knotted polyurethane wall reliefs-complementing her recent series of silvery stalagmite-like totems-brought out the brilliant coloration of Fuss’s gutsy new photos to create a cohesive and hallucinogenic whole. What does it all mean? The works approach the realm of pure sensation, and what’s wrong with that? In these mean-spirited times that’s more than you can hope for.

3.)    Group show at James Cohan
I could have spent an hour or two in this booth alone, with its evocative grouping of works by Yinka Shonibare, Mario Merz, Bill Viola and others. The video and neon pieces by Viola and Merz, respectively, enhanced the attributes of the quieter pieces on view, such as the textural panache of Shinque Smith’s new, giant cloth sculpture, Bale Variant No. 222 (2012) and the meditative feeling in Byron Kim’s spare monochromes.

4.)    Romare Bearden at DC Moore
This presentation of rarely exhibited abstract canvases by Romare Bearden (1911–1988) was a welcome surprise. Painted between 1958 and 1962, when Bearden showed at Kootz Gallery in New York, the paintings reveal the influence of stable mates such as Robert Motherwell, Hans Hofmann and William Baziotes. With an Ab Ex foundation, these richly textural, allover compositions in subtle hues herald the advent of Color Field painting of the early ’60s. In 1963, however, Bearden abruptly abandoned lyrical abstraction. Inspired by Martin Luther King, Jr., as many artists were, he turned to figurative works and the social-conscious collage pieces (one of which is also on view) for which Bearden is renowned.

5.)    Group show at Donald Young Gallery
The Chicago gallery brought to the Art Show an arresting group of works whose centerpiece was a sculpture by Josiah McElheny, Crystalline Landscape after Hablik and Luckhardt III (2011). The colorful glass objects placed in an unusual irregular polygonal vitrine indeed form an otherworldly landscape. A pair of large Bruce Nauman drawings of gesturing hands suggest a lexicon of meaning in the artist’s own eloquent language. Adding to the booth’s overall impact were Rodney Graham’s large light-box photo image of a man reclining beneath a tree, as well as recent works on paper and a flowery sculpture by Anne Chu.

6.)    William Leavitt at Margo Leavin
For those of us who missed William Leavitt’s 40-year retrospective at the Los Angeles Museum of Contemporary Art last year, this encapsulated survey was a good way to catch up with the multi-talented L.A.-based artist, writer and performer. A selection of works on paper and photos from the 1970s through last year highlight his relationship with public architectural space and architectonic forms that are at the core of his unique brand of theater.

7.)    Jim Nutt at David Nolan
Is it possible to be crazy and suave at the same time? Jim Nutt makes a strong case for it in this array of refined recent drawings and a painting. While his precisionist technique and resultant wildly distorted faces spoof the whole notion of portraiture, Nutt manages to raise the genre to some other disturbing and completely plausible psychological realm.

8.)    Group show at James Reinish & Associates
One of the great pleasures of the Art Show is to discover some long-lost art-historical gems that dealers may have recently pulled out of their closets and decided they need new homes. This group of works had no apparent connection except to suggest just such a fanciful scenario. For instance, despite its rather large size (35 by 35 inches), a painted construction by Jean (Hans) Arp from 1924-26, had an air of intimacy that would surely work best on my bedroom wall. Landscapes by Marsden Hartley and Fairfield Porter would look very handsome in the living room. However, Stuart Davis’s stunning large drawing for his 1932 Radio City mural, Men Without Women, one of only three known studies he made, is something I would definitely donate to a museum.

9.)    Ori Gersht at CRG
The large photos by London-based Israeli artist Ori Gersht are moody things. “Blow-Up,” the recent series of mural-size images of exploding flowers that fill this booth are haunting and terrible, graceful and gut-wrenching, all at the same time. We usually think of flowers as symbols of peace or joy-weddings and funerals, etc. Using a complicated process, the artist froze the flowers in nitrogen and then arranged them in elaborate still-life compositions ala paintings by Henri Fantin-Latour. Gersht then hired pyrotechnicians to blast the flowers to smithereens as he synchronized his snaps. Though a bit obvious, the bombastic results offer a much-needed protest against war and random acts of human violence and destruction that scar nature’s beauty every single day.

10.)  Group show at Greene Naftali
“Elegantly abject’ might be an apt way to describe the works on view in this wistful presentation. Seemingly conversant in the same visual language of understatement were several eccentric collages by the Francis Bacon- and Chinese calligraphy-obsessed Richard Hawkins (one of the stars of this year’s Whitney Biennial), two barely-there compositions by provisional painter Michael Krebber, and one sadly dysfunctional, but thoroughly enchanting door by Gedi Sibony. There’s nothing remotely descriptive about any of these works, so, by contrast, Rachel Harrison’s life-size silver pooch on the floor, Hotdog Dog (2011), with a plastic hotdog in its mouth, was so realistic you could almost hear it growl.