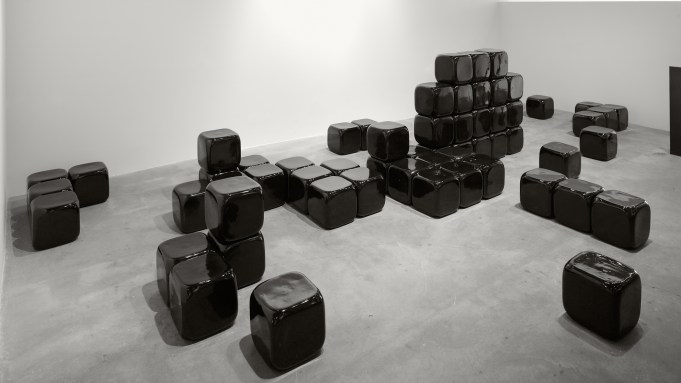 Adam Pendleton is a New York-based conceptual artist who is best known for his painting, publishing, and performance projects that investigate in the potential of language to shape subjects, re-engage history, and point toward new horizons.  Currently, his work can be seen in the solo exhibition, ” EL T D    K” at Haunch of Venison Berlin (through April 25), and will be part of the New Museum’s “Generational”, Younger Than Jesus, opening April 8th.  Here Pendleton converses with independent curator, Jess Wilcox.

JW: I’d like to begin with what I understand as one of the most unique aspects of your practice-your engagement with the discourse of contemporary poetry and experimental writing.  You’ve both directly and indirectly referenced the Language Poets as well as asked poet Jena Osman to participate your 2007 performance The Revival.  What is it that attracts you to the poetry community?

AP: Language was my primary material when I began to seriously make paintings. It was (and still is) my way of addressing and moving away from the idea of the image in relationship to the visual. I’ve perpetually thought about the tenets of language in relationship to conceptual art: language as material/ material as language; language as image/ image as language. I realized early on my work was a response to these somewhat dominating ideas. I wanted to pluralize the types of languages that could be used and how they were used in regard to conceptual art.

Language writing is important because it is one of only several writing traditions that frees language from the burden of having to “mean” or communicate. I’ve had some interesting encounters where people who admire the work of older, language-based, conceptual artists have approached some of my recent work and said, “I don’t understand, what does this mean?” So-and-so’s work may often be abstract but you can always understand what it means.” Such encounters have led me to believe I’ve moved something forward. As it has been articulated elsewhere, thought does not always determine language. Language can also determine thought.

JW: Your work references many avant-garde traditions that took an integrated approach to the arts, such as Dada, Bauhaus, and Black Mountain College. Today, few artistic projects of such Utopian aims exist, but artists have continued to collaborate with other artists of various disciplines.  How do you position your work in relationship to these traditions?

AP: The work doesn’t necessarily have Utopian aims. A lot of these movements involved very specific networks or means of organization: schools, daily gatherings, and public demonstrations. We now live in a moment where (if there were such a movement) it would, clearly, take on alternate forms because we now exist very differently, both for ourselves and for others.  I’ve done projects where I’ve tested or experimented with some of these potential forms like the networked, but simultaneously disconnected communities of LAB (an art and design think tank I founded in 2005); or LAB MAG (an occasional publication of LAB that collects the work of artists, writers and designers).

Of course there are experimental art schools that pop up all of the time, but I feel that in order for Utopian ideas to be effective, one must find a way to be specific and general at the same time. My work creates a broad operating space or idea, like Black Dada, and then focuses on specific notions within that space — like language or deconstructing the avant-garde. I hope to use these past movements as a means to equally deconstruct and construct a future.

JW: You use chance operations quite frequently as a means of composition.  Is this choice a systematic technique or a philosophical – or perhaps even ethical — position toward the idea of authorship?

AP: I like the idea of authorship as a chance operation. Visually, systemic processes often result in some of the most rewarding outcomes. If you look at what I’ve actually done — how I’ve constructed the work — that is where the most information exists. The work is the idea; the idea is the work.

JW: The photographic imagery in your paintings has a familiar look, as if pulled from the covers of newspapers. Yet, you often use less circulated images from art books rather than images from the mass media.  Regardless, your images evoke the politically charged conflicts of the last century. It’s as if you are asking the viewers to make assumptions about the images, possibly even incorrect ones.  Is this ambiguity strategic?

AP: I try to avoid images that evoke those we frequently see in the tabloids and newspapers. There have been a handful of paintings that have used overtly political or, more pointedly, superficially political imagery. I am more inclined to rely the effect of a political image than to use a political image to make a statement. Increasingly, I am starting to look at the work that uses historical images as one complex image or network. I am working to establish a system of display, of organization. I want to create a situation where we’re inclined to rethink notions of the past and the future, as well as our ability to understand them enough to make reductive statements.

JW: Many of your projects unite seemingly disparate histories and aesthetic tropes. For instance, The Revival seamlessly wove together gospel music, experimental writing, and citations from gay pride speeches; your most recent series, Black Dada, brings Sol LeWitt’s conceptualism into conversation with the poet and black activist Amiri Baraka.  Are these juxtapositions an attempt to rethink the way that art historical narratives situate black artists and culture?  Leslie Hewitt and Michael Queenland are two emerging black artists whose work engages with Minimalism and Shaker craft, respectively-artistic traditions generally dominated by white artists and associated with “white culture” (if such a thing even exists).  Do you see any affinities between your engagement with art history and theirs?

AP: I appropriate/ inhabit dominant and established discourses as much as anything else, and often it is a means of repositioning myself and particular ideas within an established narrative. The object based work and the performances are a means to bring disparate sources together. In some cases I do want to make a direct-statement: I am not what you assume a black artists is. Or, for that matter, a black and gay artist. A new take emerges when things that have been seen or historicized separately merge together. I do notice a number of emerging black artists engaging with these ideas, and would certainly include Hewitt and Queenland among them. Okwui Enwezor’s exhibition The Short Century is such a great example; I am perpetually returning to the catalog of that exhibition for material.

JW: In a review of The Revival in the March 2008 issue of this magazine, John Menick wrote: “True to revivalist form, words are not truly appropriated but spoken through.  Pendleton speaks through Kramer and Kramer through Pendleton. Pendleton’s voice is pluralized.  This is possession-possession of words and possession by the Word.” Here Menick plays on the meaning of possession, implying that The Revival is equal parts mastery of the skills of speech, and a channeling of energy or spirit. Are mastery and this idea of giving oneself over to the power of speech necessarily simultaneous, or can one happen without the other?

AP: In no way am I a master of the revivalist form and have no desire to be. I question the power and energy of speech – perhaps ironically so. I understand the particular cultural potential of specific forms and appropriate them — but more importantly, I bring them into an experimental space. In many ways, appropriation is nothing more than offering back what we know. I don’t dramatize this process. Yet, it is clearly a kind of possession-possession. Mastery and things like the energy and power of speech are just a way of articulating the recognition of an element of something we are culturally familiar with, or aware of. That’s why experimental spaces are so important. At their best, they move beyond these known quantities.

JW: Your most recent work employs several strategies that you have used in the past: appropriated images from a diversity of sources, ambiguous text/image juxtapositions, and procedural composition.  However, the title Systems of Display implies a new interest in organization and structure. How do you feel that your new work departs from your older work?

AP: The new work has become an alternative means of historicizing and organizing information. Starting with the Black Dada paintings, language exists through a perceived and literal absence – it is now this other language derived from a known quantity. The earlier work established it’s own vocabulary through less critical means. This body of work is more about observation than criticism. The newer work is a language, is an image, a new form with it’s own rules, and even limits.