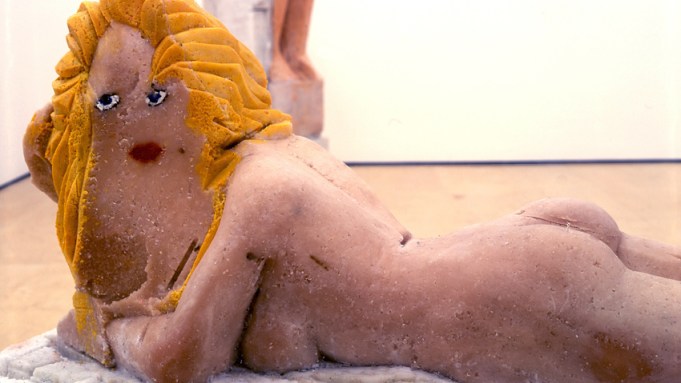 These are just a few of the 85 pieces that make up “Home Alone,” the Sender Collection’s inaugural exhibition, which fills an empty house owned by hedge fund founder and art collector Adam Sender. The pieces are often so imposing, in both content and size, that they seemed to have pushed their owner and his family out of the house.

Sarah Aibel, the Sender Collection’s curator, spoke with A.i.A. about the collection, their decision to show in Miami and the challenges of organizing an exhibition in a private residence. Aibel discarded her original plan to paint the interior of the house white, instead deciding to use the house as a tool for her curation. “A private collection is so often a reflection of a collector’s thought process and taste. Rather than try to fight against the space, I wanted to embrace it.”

In addition to grouping particular pieces together, Aibel also had to take into account the room that acted as the backdrop. She decided to place many suggestive, figurative pieces in the girl’s room to comment on the sexualization of young women. “The [work in the] little girl’s room is very sexual, because that is not what you would want to see,” she explains. “[It makes the room] completely unlivable.” In addition to the Prince piece, the room contains Raqib Shaw’s Garden of Earthly Delights XIII (2005), a Thomas Ruff nude and a Cindy Sherman centerfold (Untitled 93, 1981).

Sender is anything but a modest collector, and has been buying contemporary works for over a decade. His collection now includes over 1,000 pieces, comprising numerous works by the same artist; this strategy allowed Aibel to curate “Home Alone” as more than a group show, highlighting artists like Sarah Lucas by allotting an entire room to her work. The exhibition also boasts a handful of site-specific commissions, including two new works by Rashid Johnson, a Jim Lambie floor installation and a Lawrence Weiner vinyl wall text in the kitchen that reads: PLACED BENEATH THE SAND BENEATH THE SEA.

“There’s always been an intention to have a show to share with the public,” Aibel explains. “Having [the collection] in storage is such a shame. It was a perfect storm: Adam had this empty house, and Miami Basel [attracts] such a great cross-section of people who want to see these works.”

The exhibition opens tonight and runs through Friday, but because of the size of the house it is only available through Art Basel Miami Beach’s VIP program or by requesting an invitation. However, Aibel and Sender plan to have future exhibitions in larger, more accessible spaces. “The more people we can accommodate, the happier we’ll be. It was difficult to say we’ve reached capacity.”

The collection also rarely turns down a loan request; Sender’s works are currently on loan to the Jewish Museum, the Metropolitan Museum of Art and the New Museum in New York, and the Palais de Tokyo in Paris. To view the Sender Collection online, you can request a login at sendercollection.com.

Butter Boards Are Gross, Please Build Your Friends an Actual Charcuterie Board