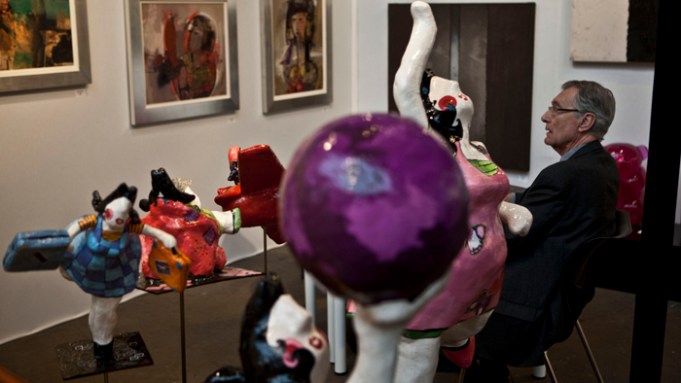 From February 5–8, the second edition of the Affordable Art Fair opened in Brussels, Belgium. Launched in London in 1999 by a former wine merchant, Will Ramsay, the fair claimed to liberate art of its financial and intellectual prices of entry (It only costs 5,000 Euros to rent a booth). Today, the fair is an international phenomenon with a presence in 10 countries; it prides itself on being the most visited of all fairs with 120,000 attendees in 2009 (twice as many as Frieze, and more than both Basels combined).

The French promotional slogan, “No need to be Pinault to buy contemporary art,” speaks volumes about the elitism, conflation of luxury and quality, and distrust of exporting national culture that art still invokes. But just as prominently, that title—”Affordable…”—speaks cringe-worthingly to taboo on discussing money, especially in art. Works on display came topped off with stickers loudly advertising their price and each booth was complete with a wrapping stand where one could grab an artwork and walk to the till.

The Belgian branch of the fair takes place in vast, renovated factory building near the center of town—outside of which “AAF” is spelled out in gigantic bright pink balloon letters, loosely invoking Jeff Koons’ sculpture but more accurately the inflatable figures outside car dealerships. 80 galleries rented stands for the duration of the fair, in a space that looks like pretty much any fair. Ramsay contrasted his experience with more traditional ones: “In fairs, there is always a feeling of fear. You could be walking by a Matisse, not realize and then feel ashamed for not recognizing it. This isn’t the spirit here.”

Ignorance might be forgiven (and why not?) but an empty—and inrpired—home would not. “Art is always decoration to some extent. Of course, one always hopes for a form of lucky investment, we’re just talking of a difference in sums,” said Ramsay. “You never know, but of you like it, go for it.”

Espace Blanche is a gallery permanently set up in the hall of a hotel nearby. Rudy Dogenik, who previously worked in the hotel industry, is the space’s founder and curator, and exclusively promotes local artists at budget rates. “This was ten years before the Affordable Art Fair,” says Dogenik, taking up some hard-won credit. “Our aim was the same: to offer affordable art that you just fall in love with and can buy straight away.” explains Dogenik.

Some of Dogenik’s key artists include Eva Delvaux’s pop-ish sculptures made fromf pastel plasticine, and Sebastian Laroche’s Dada-like installations mixing computers remnants and dissected dolls by “He wanted to warn people against the dangers of Big Brother,” says Dogenik. Both sets of work invoke historically avant-garde looks and strategies without necessarily activating them.

Will’s art Warehouse is also present. This London-based gallery was also founded by Will Ramsay in 1996. There, one can chose art works like one picks bedwear: by selecting online, the price, color, material and size needed. Highlights of their display includes beaded, collaged portrait of Barack Obama and Queen Elizabeth, and screen prints of cupcakes by Charlotte Hardy, or Picasso-esque female bodies by Trevor Price.

Overall, the art was decorative without exception or pretensionand with recurring verve for colorful landscapes, vaguely and sexlessly naughty nudes, and evidently Hirst-inspired skulls and butterflies. Inventive exceptions included photos of Playmobil toys in a glossy, airbrushed war at the Galerie S.A. (Madrid), and digital collages with Indian influences at Gallery Garden (Brussels).

The fair’s extra programming didn’t involve thematic exhibitions but a chlidren’s corner, filled with toys. A stand called “Grandpa is a Painter,” let visitors make their own paintings and sculptures. “Today we’re making bears, tomorrow women.” said a woman at the stand with arms covered in clay. Grandma, we guess. “People are always happy to make things themselves, this always puts everyone in a good mood,” said Jean-Luc Dossche, or Grandpa. A self-trained artist, he runs local workshops to teach people basic painting and sculpting skills.

Nearby, a section was dedicated to promoting young, up-and-coming artists, such as France Dubois, a 33 year-old woman from Brussels. Dubois used to work for an NGO and realized, at the age of almost 30, that she in fact wanted to be a photographer. The Belgian fair is her first ever show, and she is offering, for a couple hundred euros, Martin Parr-inspired photograpaphs of an old people’s home. “This is a super opportunity, lots of galleries are going to look at my work. This is more publicity than I could ever hope for,” says Dubois.