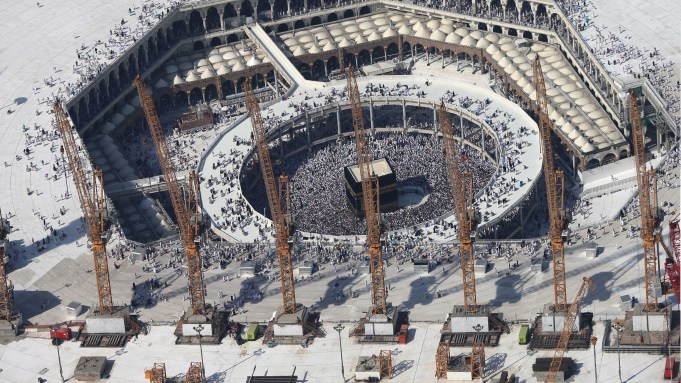 A major fault line hugs the coast of the Persian Gulf, where the Arabian plate grinds up against Eurasia. The historic rivalry between Iran and the Arab nations across the Gulf underwrites today’s increasingly tense jostling for territory, religious influence, and geopolitical dominance. New fissures have emerged in the proxy wars currently playing out in Yemen and Syria; animosity between Iran and member states of the Gulf Cooperation Council (GCC) is at an all-time high.

What better time, then, to show Arab artists for the first time in Iran? Mohsen Gallery in Tehran has taken up the historic task with “Spheres of Influence,” a group show organized by New York-based curator Lila Nazemian, on view through May 11. It seems hard to believe that works by Arab artists haven’t appeared in Tehran before—especially when the United Arab Emirates serves as the primary clearinghouse for Iranian art—until you consider just how heavily domestic their scene has been in the last century. The closest analogue was the display of work by Turkish artists at the 1966 Tehran Biennial—Middle Easterners, but not Arabs. Even the much-beleaguered Tehran Museum of Contemporary Art’s formidable collection of Western blue-chip works has remained largely unseen since 1979. Nazemian has judiciously avoided attempting a survey, instead putting together a tight five-person show. Significantly, all the artists are from either Gulf countries (Saudi Arabia, Kuwait, the UAE) or Iraq, an associate GCC member until 1990; most could not attend because of the volatile political climate.

Despite Mohsen’s setting, nestled on a very lovely, leafy street in a tony corner of northern Tehran, the bloody umbra of the eight-year-long Iran-Iraq War haunts the exhibition. Today Iraq is the lynchpin of Iran’s sphere of influence and functions here as the show’s primary referent. Tarek al Ghoussein documents the reconstruction of Kuwait following Saddam’s 1990 invasion in his photograph series “K-Files” (2013). Large digital prints (commissioned for Kuwait’s 2013 inaugural pavilion at the Venice Biennale) depict sites of national importance. Some, like the handsome parliament building and the soccer stadium, were speedily renovated in the war’s aftermath. Others remain untouched: in the ruins of a palace, a broken chandelier swings like a piñata made of bones. The Kuwaiti artist uses a timer to capture himself in the photographs, but he keeps a distance from the camera. He thus appears tiny and utterly dispensable in the state’s grand rehabilitation of its image and, in light of Al Ghoussein’s Palestinian heritage, doubly exiled.

The last photo in Al Ghoussein’s “K-files” series shows the landmark Al Sawaber buildings, luxurious apartments that were built and distributed to revitalize downtown Kuwait. As citizens moved to suburban villas, they were largely replaced by the working-class migrants upon whose backs the country was built. No longer relevant to the national mandate given this new demographic, the complex was allowed to slide into dereliction. Last year its remaining residents were given 72 hours to take what they could before the site was razed. It has been over a year since the eviction and the buildings are still standing. The vignettes of “Al Sawaber” (2015), a second series by Al Ghoussein, tenderly frame the debris left behind: posters of Jesus and Shia imams, a personal organizer, CDs spilt on a stained pink couch, illicit erectile dysfunction aids, the peeling wallpaper of a knights-and-dragons tableau in a child’s bedroom.

Iraq is the setting in Wafaa Bilal’s “Ashes” series (2003-14), in which the artist painstakingly spent a decade reconstructing scenes of ruin from the 2003 bombardment of Baghdad as scale models before photographing them. As with “K-Files,” there’s a doubled frisson of encounter—the images are instantly recognizable to anyone who consumed the war from afar, through the lens of photo agencies. We see the sighing rubble of Saddam Hussein’s palace with an ornately gilded chair—a precise re-creation of Franco Pagetti’s iconic image—as well as the decimation of Al Mutanabbi street of booksellers, where a lone splayed volume gestures to its former status as a magnet for the Iraqi intelligentsia. But bodies of the dead are crushingly replaced by the piles of the ashes named in the title.

Outside, across a charming cobblestone courtyard, another building houses Darbast Platform, the gallery’s auxiliary performance, lecture, and cinema space. It’s a cocoon of black fabric stretched over vaulted Gothic ribs that gloriously feels like the inside of a covered wagon. If an aside, it’s a riotously fun one, with two “Never Never Land” videos (2014) from Arwa Al Neami’s visit to an amusement park in her hometown of Abha, Saudi Arabia. Filming women is forbidden so for Never Never Land 2 the artist hid a camera in her abaya to capture her compatriots gleefully playing bumper cars—the closest women can come to driving in Saudi Arabia. In Never Never Land (Drop Zone), women ride a drop tower, flailing their legs and screaming with delight on the whoosh down, comically struggling to rearrange their propriety on the way up. Local mores dictate women should not be too loud or draw too much attention to themselves, which leads to a funny chorus of hiccups as the fairgoers remember to quiet themselves mid-squeal.

Back in the basement of Mohsen’s main building, Ahmed Mater’s “Desert of Pharan” series (2012-ongoing) documents Mecca, which is being aggressively redeveloped under the aegis of religious tourism. Under the Saudi state’s preservation mandate religiosity is entirely located in practice and not in structures; thus, even the Prophet’s birthplace has been bulldozed and replaced with a Hilton and a Burger King. Many of the large-scale photographs present a drone’s-eye view, from a height where pilgrims resemble ants, or looking down onto the Kaaba from an ultra-luxe $3,000-a-night hotel room. Fresh in the air is the memory of the 2015 Hajj stampede that killed over 2,200 people, some 464 of them Iranians. Stand in Pathway and See, a quietly poignant image, shows a view of the clock tower from an older area that has not yet been demolished.

A last corner of the basement hosts Lamya Gargash’s “Majlis” (2009) and “Presence” (2005-07), photographs of sitting rooms around the UAE. Some are humble and others impossibly grand but each show the Gulf as we might reliably expect to see it—silken sofas, elaborate chandeliers, assorted tissue boxes. The soft furnishings sheathe the armature of an increasingly militarized state. The first public institution of the Emirati state, the majlis is a room in a home that functions as its public space. It is a place where families come together—to present themselves to the outer world, to bitterly hash out recriminations—neatly encapsulating the situation as a whole. “Spheres of Influence” hopes to open up new avenues of artistic collaboration and dialogue, but if this is a family reunion, it’s an awfully bittersweet one.