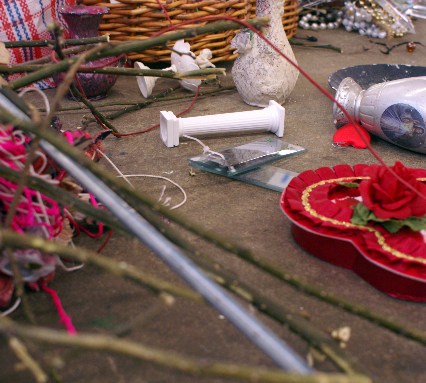 Who says magazine journalism hasn’t elevated the discourse of the New York art scene? It was an article in Dazed and Confused (“Smile! It’s the Apocalypse,” published Winter 2008) focusing on the male, New York-based artists of her generation, that incited Agathe Snow to create an aggresive new body of work about the gendered meanings of order and disorder, and about sucking the life out of a community or a body of work by blowing too hard.

Photo Courtesy of The Fireplace Project.

Installed in Winter 2008 at the Sculpture Center in Long Island City, “The Asshole of NYC: An Attempt at Conversation” marked the first appearance of Snow’s wreaths, eight-foot tube frames draped with elaborate ornaments that were, by far, her most compositional sculptural works to date. In the basement of Sculpture Center, Snow posted the “Apocalypse” article on the wall. That article listed the various detritus her peers used in their scrappy, rebellious, masculine artworks; Snow incorporated each of those materials into eight woven wreaths fitted into the dimensions of the Center’s long dark hallways, through which visitors had to pass. The first wreath contained 40 vaccuum cleaners, such that viewers were “first sucked into the asshole, and then would go through a tunnel of eight wreath-like sculptures that would seduce you on a path from which you cannot come back.” Bullshit goes in, and something else comes out.

In spite of the works’ direct satire, Snow was sincere in her attempt to start a conversation. In other bodies of work, Snow has proven herself a very competent mess-maker; here the iteration of materials tosed off in the Dazed article, the attention to detail, and the narrative created by the environmental set-up and the figurative qualities of the sculpture amounted to a substantial argument both for and against the non-compositional assemblage she and her peers had popularized. The wreaths are a pointed question about who was going to clean up the conceptual mess made by other artists’ refusal of both formalism authorship,with a simultaneous push for craftsmanship and its political valences. They’re also distillation of Snow’s famed Downtown dinner parties which were, obviously, parties, but also playful investigations of the pervasive exchange between host and guest.

“Terrestrial Forms,” a new show at the Fireplace Project in East Hampton is dominated by a continuation of Snow’s wreath series (here they’re six feet in diameter) that recycles the dangling materials from earlier incarnations. Once again, Snow demands you jump through hoops to take in the visual impact. These “terrestrial forms” emphasize luxury materials and signifiers of femininity like pearls, plastic seashells, and ornaments, and includes small, shiny wrapped gifts that come with the artist’s caveat, “It’s celebratory, but only if you know what to do with the gifts…”

East Hampton is the great fortress of summer luxury (and Snow’s wreaths did look good at Peres Projects’ Armory booths!), but for Snow it’s also an extension of a yearlong experiment that began when she moved out of New York to spend the last winter in Orient, on the North Fork of Long Island. Snow initially signed on month-to-month, but recently signed a two-year lease on a farm house, amidst corn and sod fields. She says that, “The country has had no creative impact on me yet, I still source myself in the city’s havoc,” but advises, “I think you’ll find it serene… that is if you take my other shows into consideration.”

“Total Attitude Workout Video,” which was first installed at Jonathan Viners Gallery in London, in February 2008, encourages female Americans to “Sprinkle a little sex” into their lives, and displaces the physical activity of passing through hoops into one of joyful coercion. With a typical flare for puns, Snow says the video is about both “stuffing and packaging.” Snow says that this particular installation removes the performance element from her work, although the act of walking and viewing retains that spectacular aspect, even if you can’t hula hoop. She’s also re-purposed the floor piece from her contribution to the 2008 Whitney Biennial, a 24-hour dance marathon, which is a reflective both document and stage of dances past and future.

The Fireplace Project is located at 851 Springs Fireplace Road, East Hampton. “Terrestrial Forms” is on view through August 31. In celebration of the mess required to generate Agathe Snow’s wreaths, we included some of the artist’s unseen installation photos, captured before the exhibition came together, courtesy of The Fireplace Project: