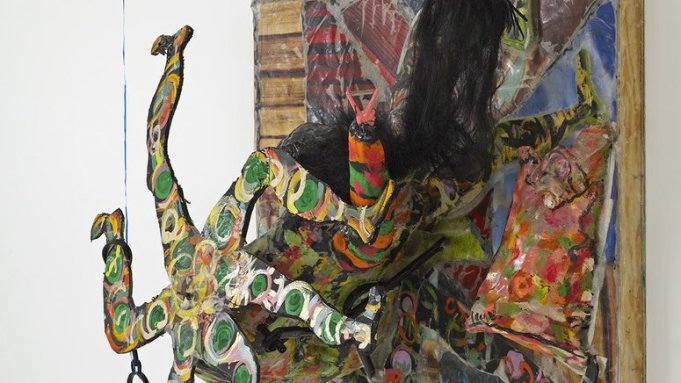 The sculptures that comprise “Tout Dit (2D),” New York-based artist Agathe Snow’s first exhibition with OHWOW in Los Angeles [through Dec. 8], tell cautionary tales. Inspired by the Seven Deadly Sins, the artist’s latest series of wall works (all 2012) began as pages and pages of writing—hypothetical scenarios with moral undertones, employing figures of speech that relate to being trapped in one’s head. Snow culled 20 situations  from this writing, which she has translated into assemblages of papier-mâché, foam, found objects, and gestural splatters of paint. “The movement between text and sculpture is very literal,” said Snow. “I take words, phrases, and questions, and illustrate them. Language makes me laugh a lot. I find it to be so reductive and at the same time so explosive.”

Snow is best known for ephemeral sculptures made of vernacular materials—eggs, wigs, inflatables, papier-mâché flowers and water hoses. Earlier this year at Maccarone, New York, she dangled floor-to-ceiling sculptures from the rafters of the gallery, effecting playful allegories of purgatory. Snow’s new assemblages, mounted to plywood, see her elements colliding head-first onto a single plane.

The artist’s arrangements-papier-mâché donkeys flying into urns, Disney figurines perched atop concentric outlines of a head in profile-evoke shifts in scale, with each panel playfully travelling between microscopic and macrocosmic points-of-view. In Evolution Going Flat, segments of a sculpted crocodile’s body broken up over the composition suggest the reptile slithering in and out of the picture plane over time. A crocodile skin handbag in one corner makes plain the animal’s fate, its inevitable conversion into just another luxury good.

The artist’s collaged vinyl grounds have an allover effect reminiscent of the two-dimensionality of medieval painting and stained glass. Likewise, the works approach a spiritual dimension. “I think of the perspective in these works as being present forward. It is the way Gothic artists imagined God would look at us, that God would see everything and could change everything at any time. In effect, you could appear very small or very big.”

In Been Here Done That, Snow used a rotating seat wrested from an abandoned tractor to support a spinning cutout of legs painted with colorful, broken curves radiating from green circles. Mounted to its plywood support and sealed under thick fiberglass, the sculpture depicts Man repeating the past in an infinite loop as he suffocates beneath a vacuum seal. “When you are in situations where you are obsessive or addictive, no matter what you see on the outside, there is so much going on inside,” said Snow. “I wanted to have a very thick shell on everything, to represent a certain impenetrability when you are in that mind state.”

The artist looks to her native Corsica in The Itch, which addresses what Snow calls her fellow countrymen’s over-sensitivity.  During her conversation with A.i.A., she noted that it was the first time she hadn’t cried while talking about the piece. Said Snow, “In Corsica, they always say that the people have no skin, that they are too sensitive. So in The Itch, this brown Krishna-like figure is scratching himself until his skin peels off.”

The artist took up the devastation wrought by Hurricane Sandy at the last minute in “Oh, Sandy!” The only hanging sculpture in the exhibition, the work comprises oversized flowers in paper-mâché, reflective ornament balls, a latex heart, and fabric candles and bodies, among other objects, all strung up in a compressed dystopian mobile. Said Snow, “With Sandy, again I couldn’t help but think about the devastating leveling of scale, of bigness and smallness, that occurs when everything is washed away.”