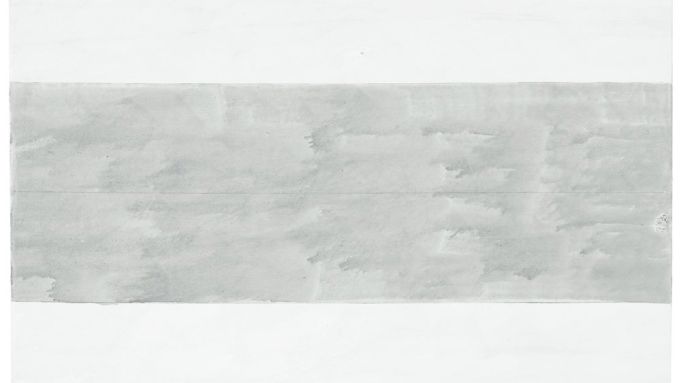 The spare, square canvases of Agnes Martin (1912-2004) have had a steady, respected presence on the global art scene for half a century, but they still have not quite found their proper place. Once Martin began to develop her signature style in New York in the 1960s, she associated with her Abstract Expressionist peers, but her work usually does not get featured in surveys of that movement. Her simple, right-angled geometries, which can seem blank or impenetrable, often cause people to miscast her as a Minimalist,  or dismiss her as boring.

But a patient, inquisitive gaze can reveal Martin’s sotto voce gravity, underlying humor and formal nuances—her ways of transforming technique into emotional potency. Even before the artist produced her first meticulously penciled grids, her lines quivered with casual sensitivity. Starting over in the 1970s, following a seven-year hiatus during which she left New York, traveled by camper and retreated to New Mexico, Martin transformed her 6-by-6-foot lattices into spacious bands of pale color, downsizing to 5-by-5-foot canvases only when she could no longer lift the larger paintings by herself.

Martin’s intense desire for solitude, yielding a hiddenness that subtly animates her paintings, compelled her to sidestep the mainstream and thus facilitate her own marginalization. She spent most of the rest of her life in (or near) small New Mexico towns, strictly limiting any contact that might interfere with her work. So despite multiple museum retrospectives and a Golden Lion for lifetime achievement at the 1997 Venice Biennale, her contribution to 20th-century art is celebrated most enthusiastically among isolated clusters of devotees. The past 20 years have barely changed the accuracy of Benita Eisler’s 1993 characterization of the artist: Agnes Martin is still “probably the most famous unknown artist in America.” 1

Agnes Martin: Paintings, Writings, Remembrances, by Pace Gallery owner Arne Glimcher, contains all the elements necessary to turn the tide. Glimcher gathers Martin’s images and manuscripts in sufficient quantity to recalibrate her oeuvre. He arranges them in fresh groupings and juxtapositions, using his curatorial finesse to craft many illuminating encounters. He also bares details of his experiences with Martin, via numerous Polaroids, a poetic chronicle of her somewhat illegal burial, and accounts of his studio visits in New Mexico. Many of the book’s materials were previously kept private, we learn, because Martin requested his biographical silence while she was alive.

Glimcher had so many documents, and Martin had such pull with her requests, because he had been her dealer since 1974; they also knew each other during her earlier decade in New York (1957-67). The abundance of information in this book, issued in Martin’s centenary year, suggests a project long in the making. Indeed, for decades Martin was wary of Glimcher’s urge to publish, though eventually she “asked [him] to put together a book when the time came.” The result is not a standard-issue monograph to promote a gallery artist. Instead, the book reads like a heartfelt tribute to Martin’s work—and to the relationship between the artist and her longtime admirer. Moreover, Glimcher knows well that a market-oriented book would not portray Martin accurately: at one point, as a letter to him attests, she would not even agree to exhibit in the Pace gallery space that got the most foot traffic.

To a degree, this volume is as much a portrait of Glimcher as of Martin. He recounts a partnership between two hardworking visionaries who built their lives around beauty. A common ground—literally of plain earth—also connected them: we learn that Glimcher spent time on a Minnesota farm in his childhood, while Martin (who grew up in rural Saskatchewan) wrote that “the little child sitting by himself in the dirt and forgotten is the one open to inspiration and the deve[l]opment of sensibi[l]ity.” A haunting, poignant leitmotif is the definition of the friendship between Martin and Glimcher. To Glimcher (as to many of her acquaintances), Martin said that she had no friends; yet clearly they enjoyed a deep and abiding mutual regard.

Certainly the two gloried in their shared adherence to a sensuously material esthetic, which finds expression in this book’s fine production. The book jacket, for example, is a precisely folded, translucent sheet of vellum that shrouds reproductions of two Martin paintings, printed individually on the front and back covers beneath, while also framing them between a pair of bands that signal Martin’s love of the horizontal. As with the artist’s pictures themselves, there is a slow disclosure. So even before you crack the cover, you perceive a sensibility that is pointed yet inscrutable. And you “get” that message vividly and almost unconsciously, through your senses and not through any conceptual constructs, just as Martin wanted people to apprehend her works.

Glimcher tells us Martin was so averse to ideas and writings about art that in 1980 her first chance for a Whitney retrospective went sour because she refused a catalogue, especially one with essays. His book contains many such fascinating facts, but its main focus—as the sequence of categories in the subtitle promises—is Martin’s artwork. Glimcher offers plentiful, and beautiful, color reproductions of pieces both familiar and not, as well as rare installation photos (including several of the Whitney retrospective to which Martin eventually agreed, in 1992). A number of small oils, works on paper, watercolors and assemblages are stunners, and a few multipage fold-out spreads feature anomalous suites of paintings. This thorough survey allows us to detect shifts as well as consistencies in Martin’s long career.

As plentiful and captivating as the images are, however, they are almost overwhelmed by the high-quality facsimiles of Martin’s manuscripts—sometimes dozens of pages thick—bound here and there into the book’s pages. These gorgeous surprises replicate even the textures and faded colors of Martin’s steno pads. Glimcher preserves blank pages, which slows the pace of reading, and the insertions are mounted at different heights in the gutter, which prevents the visual effect from going stale. Sometimes Martin’s capitalization and punctuation dissolve, leaving run-on sentences in all lowercase letters—a script equivalent of her allover painting technique. We can track her edits more easily here than in her studio work, because her crossed-out words are still legible. We can also follow her rare forays into drawings or non sequiturs: “What is the worm of the world that spoils exultation? / • ––– • / One who has become all eyes does not see. / • ––– • /To try to understand is to court misunderstanding.”

Mostly, Martin’s writings muse on her lifelong themes: sensibility, responsiveness, beauty, truth, inspiration, perfection. But she also exercises a spirited determination. Letters to Glimcher beseech him to give her “unag[g]ressive paintings” an “unag[g]ressive showing” and to sell them to buyers uninterested in prestige. Amid many items of advice for art students, she insists: “A studio is not a place in which to talk to friends. You will hate your friends if they destroy the atmosphere of your studio.” Glimcher does not include the occasional fables or the darkest texts that pepper her out-of-print Writings/Schriften (1992), but plenty of passages issue warnings to reject self-interest and to avoid the dangers of pride. “Please fight against that messiah thing,” she writes, perhaps to herself as much as to her artist colleagues.

Though Martin’s writings are never confessional, they obliquely reveal her priorities. Glimcher’s transcribed “remembrances” of his history with Agnes, however, baldly expose the artist’s life and mind. Notes and photographs from his visits to Martin in her series of New Mexico homes—Cuba, Albuquerque and Galisteo in the late 1970s, and Taos during her final years—appear with the artist’s works from those times. We get fresh glimpses into Martin’s studios and kitchens, as well as examples of her personal and professional habits: sometimes she ate one type of food for weeks on end, to simplify life while working.

Glimcher also writes, early and often, about Martin’s schizophrenia. Never in print have Martin’s “voices” been discussed so forthrightly, yet Glimcher’s tone is curiously casual, as if this “big reveal” were a nonevent. Though Glimcher was evidently accustomed to this reality, and aware of the power that these voices held in Martin’s life, he must also have known that his text breaks a near silence on the matter. (Glimcher stays mum, though, about the nature of Martin’s “close relationship with the Greek artist Chryssa.”) Because Glimcher never contextualizes her schizophrenia, he risks reviving old stereotypes about artists and mental illness: simply to report that Martin painted what the voices told her to paint could make her sound like merely a puppet to madness. Martin’s oeuvre, by contrast, testifies to her success in coping with her affliction. Her canvases play with diverse, raw, vital energies, containing them with elegant discipline. Still, given the complications of this topic, it is soothing (and sweet) to read passages that do not mention it. In later years the pair, now easy with each other, would speed along the stark back roads of New Mexico, singing.

Glimcher’s commentaries on Martin’s images are likewise comfortable. They read like skillful wall texts, supplying essential facts without imposing conclusions. Glimcher asks readers to flip between Martin’s final painting, an untitled work from 2004, and Trumpet (1967), the last canvas she did before leaving New York and taking her long break from painting, and to notice the “stormy grey asymmetrical brushstrokes” in both. The resemblance between the two unusually loose paintings suggests that the energy stirred up by these impending departures—from the city, from the body—created more anxiety than her usual strategies could enable her to accommodate.

Glimcher, unsurprisingly, comes across better as a curator than as a historian: editorial oversights weaken the reliability of the book’s truths. For example, Martin could not have been found psychotically wandering on Park Avenue in 1968 if this legendary episode indeed occurred just before she left New York in 1967, and three lines get erroneously repeated in her most often reprinted aphoristic essay, “The Untroubled Mind.” Presumably, such glitches will be corrected in future editions. And ideally some of those reissues can be in paperback, which would be more affordable for the “young artists” Glimcher says he intends to reach.

Beyond the prospect of a paperback, the next few years will bring ongoing revelations about Martin. Many other books are in progress, and a major retrospective exhibition will begin in 2015 at the Tate Modern in
London and travel to Düsseldorf (Kunstsammlung Nordrhein-Westfalen), New York (Guggenheim Museum) and Los Angeles (LACMA). It remains to be seen whether this activity will effect a sea change in Martin’s status. But Agnes Martin: Paintings, Writings, Remembrances serves as an advance souvenir, a comprehensive exhibition between book boards. Thanks to this volume, the rigorous openness and delicate complexity in Martin’s work can be better fathomed and appreciated. And perhaps her achievements can begin to be fully integrated, at last, into a revised narrative of postwar art history.

Karen L. Schiff is an artist who lives in New York.