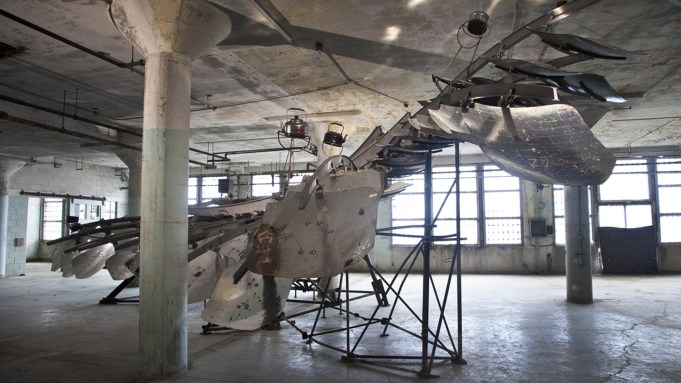 A rocky island full of crumbling buildings is hardly a typical contemporary art venue. Yet “@Large: Ai Weiwei on Alcatraz,” a site-specific exhibition of seven new works (through Apr. 26, 2015), could not have found a better venue. With its peeling paint, broken glass, metal bars and tiny detention cells, the former prison (which became a national historic landmark in 1976) provides the perfect setting for his themes of freedom and restriction.

Imprisonment and exile are subjects the 57-year-old artist knows all too intimately. His father, the celebrated poet Ai Qing, was banished to the Gobi Desert to clean toilets when Ai was a boy in the 1950s. The artist grew up foraging for seeds to stave off hunger. In 2011 Ai himself was imprisoned for 81 days, mostly in solitary confinement, charged with tax evasion as retribution for his outspoken activism, particularly over the deaths of schoolchildren in shoddily constructed public schools in the 2008 Sichuan earthquake. Even now, he is held in “soft” detention, unable to travel and under constant surveillance—thus the show’s title, which ironically implies free roaming.

Alcatraz draws 5,000 visitors a day—1.4 million a year—who encounter Ai’s work as they stroll through cell blocks, hearing tales of infamous inmates like “Scarface” Al Capone and George “Machine Gun” Kelly. One reason National Park Service officials approved the exhibition proposal was that they want visitors to connect the island’s past and present. Michele Gee, chief of interpretation and education for the NPS, told reporters the exhibition offers an opportunity to “develop global citizens.”

It may prove a challenge to get day-trippers to engage with a sculpture called Refraction, crafted from metal solar panels, woks and teapots. What will they make of the audio piece called Illumination, in which Hopi Indians’ voices sing their Eagle Dance in a prison cell? And then there are the thousands of tiny porcelain flowers, blooming like scrubbing bubbles in chipped porcelain sinks, toilets and a bathtub in the hospital ward that comprise Blossom. One can almost see the confused double takes.

For Ai, the chance to reach John and Jane Doe was a major draw. The show is organized by Cheryl Haines, executive director of the For-Site Foundation (and the artist’s San Francisco dealer). When she asked the artist how she could help him after he emerged from detention, he answered, “You can bring my work to a broader audience,” she told A.i.A. She asked him, “What if I bring you a prison?”

Ai was pleased to hear that children are frequent visitors to The Rock. Since he’s become the father of a five-year-old son, Haines says his interest in reaching the next generation has grown. Making his work visually appealing to the younger set inspired him to create a colorful dragon kite and portraits of political prisoners formed from more than a million Lego pieces. He pushed for WiFi, installed for the first time on the island, so that post-millennials could immediately share their experience there via social media.

A master at employing the Internet to circumvent censorship, Ai is not only tapping new audiences but also widening his scope. His past work has criticized human rights violations in China. This exhibition similarly indicts 30 countries around the world. The United States is not exempt; the subjects of his Lego portraits include whistle-blower Edward Snowden. The Hopi chants of Illumination, emanating from a closet-sized cell that formerly housed mentally ill prisoners, recall the fact that Hopi men were Alcatraz’s first prisoners of conscience, jailed for refusing to let their children be educated at substandard schools.

With Wind hangs from the ceiling of a building where prisoners cleaned laundry. Its body is composed of 100 painted rice-paper kites, bamboo and silk, its bird and flower motifs representing nations like Uzbekistan and Saudi Arabia. Crammed inside the workhouse, it’s a clear allusion to labor camps and constraints on civil liberty.

Refraction can be seen only by peering through broken glass panes in a narrow corridor—the gun gallery once walked by armed guards. The 8,000-pound sculpture, made of solar panels used to heat food in Tibet, resembles a giant bird’s wing. Again, Ai creates a trapped animal.

The most powerful work consists of 12 audio installations housed in small cells. Each highlights a poem, song or speech by dissidents. Referring to exploitation of black workers, singers at the infamous Robben Island prison, in apartheid-era South Africa, sing, “We can’t mend it, we must end it.” Chilean musician Victor Jara, tortured and killed after the military coup that ousted Salvador Allende, sings that “a song has meaning when it beats in the veins of a man who will die singing.” The voices of the Nigerian singer and activist Fela Kuti and the Russian feminist band Pussy Riot ring out from other cells.

The interactive piece Yours Truly aims to galvanize visitors to action. It consists of teak racks of postcards addressed to the prisoners portrayed in Trace, offering visitors a chance to let the detainees know they’re not forgotten.

Alongside knickknacks like a stainless-steel inmate cup and brass guard whistle, the Alcatraz gift shop sells magnets with Ai’s maxims. One reads: “A small act is worth a million thoughts.”