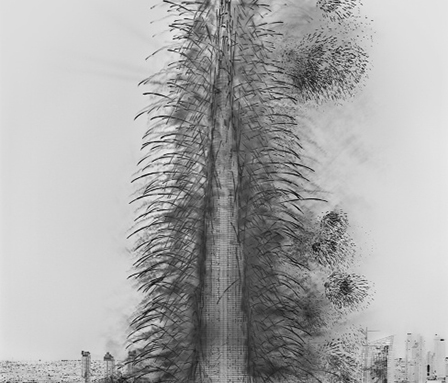 A wide swath of historical photography is on view at the Association of International Photography Art Dealers (AIPAD) Photography Show at the Park Avenue Armory in New York (through Apr. 7). Among the 82 dealers represented, there’s a line-up of classical photography’s usual suspects: Fox Talbot, Steichen, Evans, Kertesz and so on. While lighter on the contemporary, the fair contains a few standout galleries in this category, including Lisa Sette, Bonni Benrubi, and M + B. Price points range widely, from $500 carry-away prints to large scale Massimo Vitali pictures (price upon request).

Whether pre-pictorialist, post-modernist or something in between, choose your own top 10 this weekend. The show is open 11 A.M. to 7 P.M. Friday and Saturday, 11 A.M. to 6 P.M. Sunday, with panel discussions all day Saturday.

M + B (Los Angeles): When it comes to punk rock epics, Matthew Porter’s captivatingly implausible flying muscle cars sort of define the category. The one at M + B’s booth, Valley View (2013), like the rest of the series, is California cool, cinematic to the nth degree. Starsky and Hutch meets the Metropolitan Museum of Art (where another of Porter’s cars was recently on view as part of the “After Photoshop” show), it’s what you’d expect to see decorating one of Brad Pitt’s walls.

Bonni Benrubi Gallery, Inc. (New York): Twentieth-century and contemporary photography stalwart Bonni Benrubi Gallery does not disappoint with a striking, if too small, selection of French photographer Stephane Couturier’s work. Even though Brasilia, Monument no. 1 (2007-08), from his Melting Point series, is not Couturier’s strongest work, it nonetheless reflects his sharp sense of design, composition and color, and his lyrical, painterly ability to represent transformation.

Paul M. Hertzmann, Inc. (San Francisco): Fun, unique, hilariously captioned, staged ’70s-era photos by Marica Resnick are the highlight here. A masked Stephen Colbert look-alike in a tux holding a cigarette is at the center of one small, vintage silver print. In the frame the artist has scrawled, “She would rendezvous in her bed with the sandman every night.” Roughly 16 by 20 inches, the prints are reasonably priced at $4,000.

Galería Vasari (Buenos Aires): In a similar vein, though more political-historical, Vasari has a handful of rare 1948-9 photos documenting no longer extant collages by German World War II émigré Grete Stern. Stern studied at the Bauhaus before fleeing to Argentina, where she illustrated via collage a column in a women’s magazine, Idilio, to which ladies sent their dreams for analysis. These sueños evince a gamut of classical psychoanalytical motifs with style, precision and a modicum of humor, at $19,000 each.

Bryce Wolkowitz Gallery (New York): Cartier-Bresson wrote, “In order to give meaning to the world, one has to feel oneself involved in what one frames through the viewfinder.” Canadian-born Edward Burtynsky’s Dryland Farming #13 (2010) reflects the artist’s consciousness of environmental and sociopolitical issues around topography, natural resources and farming. It’s a large-scale landscape, a systems C-print taken over Monegros County, Aragon, Spain, filled with Brice Marden-esque squiggles, dots and dancing lines in a rhythm of beiges and grays.