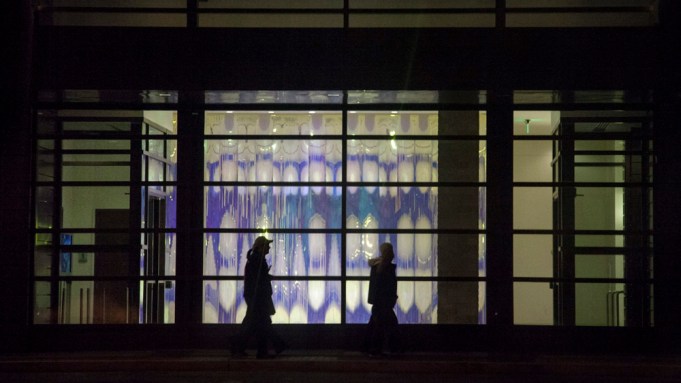 The Alexander in downtown Indianapolis, which opened late January, isn’t the first hotel to sell itself on the strength of its art: The Gramercy Park Hotel, in New York, 21(c), in Louisville, and the James, in Chicago, come to mind. But the Alexander represents an evolution in the art hotel concept. Its developers’ unique collaboration with the Indianapolis Museum of Art (IMA) and its front-and-center placement of the art and associated didactic materials, grants the work a didactic authority rare outside museum walls, eschewing hotel art’s traditionally decorative role, aggressively challenging visitors to stop, to inquire, to engage.


Unlike many art hotels, which draw from private collections, the Alexander displays 60 works that were curated entirely by the IMA. Fourteen of the 26 artists with original work at the hotel were commissioned to produce art specifically for the project.

Commissioned artists were chosen from around the world. British graffiti artist Nick Walker (also known as “Vandal”) covered the inside of the parking garage with stenciled graffiti art that included disguised images of an IMA curator’s daughter. A roughly 11-by-9-foot installation on the second floor by Virginia-based artist Sonya Clark, Madam C.J. Walker II (2012), depicts a shadowy image of the titular figure, an African-American woman and the country’s first self-made female millionaire, who built her fortune in Indianapolis during the early 20th century making hair care products for black women. The piece is made entirely from 3,840 black plastic combs.

The partnership between a hotel and a major public art institution is an uncommon union, but one which, if successful, may serve as a viable revenue-generating model for other museums, said Lisa Freiman, lead curator for the project and senior curator and chair of contemporary art at the IMA.

“Initially, our question as an art museum was, can we do this? Should we do this? What’s in it for us? What’s in it for the city?” Freiman told A.i.A. during a tour of the hotel last month. At the recession’s peak, the museum lost about 30 percent of what, in 2007, was a more than $383 million endowment. (The endowment is back up to about $326 million as of last June.) Ultimately the museum saw it as a chance to earn money for its operating budget-more than 70 percent of which is endowment-based—while also “help[ing] increase the quality of contemporary art around the city,” Freiman explained. The board of governors voted unanimously in favor of the project. (The president and CEO of Buckingham Companies, the hotel’s developer, has a seat on the board.)

“Museums are constantly looking for new revenue streams because of the lack of funding from government and corporate [channels],” Freiman added. “And during the recession, of course, individual giving went down dramatically. This was sort of a mission-focused way for us to generate some money for the bottom line.”

Neither the IMA nor the hotel would disclose how much hotel developers paid the museum or the artists. News from the museum today suggests the urgency of revenue-generating initiatives like the hotel project. The museum has announced a plan to cut 29 jobs in the education, curatorial and conservation departments, as reported today by the Indy Star. This reduction is expected to yield an annual savings of 1.7 million dollars, which will be applied to the museum’s operating costs. The IMA’s endowment was valued at $326 million in 2012, down from its high of $383 million in 2008.

Freiman said she and Veronica Roberts, the project’s adjunct curator, were given enormous latitude to amass an original collection. “We realized that when we were looking at all the different models for art hotels that there was really no art hotel that focused primarily on commissioned work and site-responsive work,” Freiman explained. “So we tried really hard to engage artists who would create experiences for visitors that would be defining, that would help create a sense of place in the hotel and also in the city.”

The hotel’s artistic centerpiece is the hotel bar, Plat 99, designed by the Cuban-born artist and MacArthur “genius grant” winner Jorge Pardo. His 99 hand-molded acrylic lamps light the bar in myriad colors, with globular shapes that feel at once futuristic and 1970s vintage, blurring the distinction between interior design and installation art.

Other installations are similarly challenging, altering the hotel’s hallways and atria, beckoning casual viewers to re-examine their sense of place and time. Standing Wave (2012), a floor-to-ceiling installation by New York-based Alyson Shotz, greets visitors on the ground floor, an iridescent, wavelike sculpture that refracts the ambient light of its surroundings, changing color with the viewer’s position and time of day.

Upstairs, viewers encounter 39 point 76181 degrees North 86 point 154668 degrees West (2012), a 16-foot-wide, nearly 13-foot-high sculpture in polished, laser-cut stainless steel by New York-based artist Mark Fox. The piece is a mirrorlike transcription of Fox’s handwritten, stream-of-consciousness musings from a recent stay in Indianapolis. Its geographic coordinates are reflected in the title, just as the viewer is reflected in the polished steel.

“Most of the time it is the architecture that gets the first priority [at a new hotel] and then it’s the art,” said Lauren Zoll, an Indianapolis-based artist whose 10 black-and-white roughly-textured spray paintings, Ten Minute Drawings (2011), adorn a hallway on the second floor. “I think that’s what’s pretty much unusual,” she added. “The art program got the first priority and the most freedom.”

Though the original works occupy public spaces-a crucial element of the project’s “educational” mission, as Freiman put it-the hotel’s private spaces are infused with art as well. Each of its 209 rooms and suites contains two prints, each by the same artist, many of whom do not have original work at the Alexander. Several had connections to Indianapolis, like New York-based painters Ryan Schneider and Gretchen Scherer, both of whom grew up there.

Museum-style wall texts and artist statements accompany each original work-an uncommon feature among so-called art hotels. Staffers attended mandatory lectures by Freiman about the collection; all front-of-house employees are expected to pass a four-page exam on the work.

Brazilian-born Artur Silva, whose bright, carnivalesque mural Allegory of the Cave: State Fair (2012) occupies the sixth floor by the elevators, said he recognized the inherently difficult task hotel art is asked to perform. Its success depends on subtlety-on sometimes withholding “the punch line,” he argued.

“Museums are places where it’s OK to be confused, to be challenged, to be angry at times,” he said, adding: “But I think there’s a way to build a [hotel] collection where it’s not sappy, where it’s still pushing the envelope incrementally. And I think that’s precisely what they did here.”