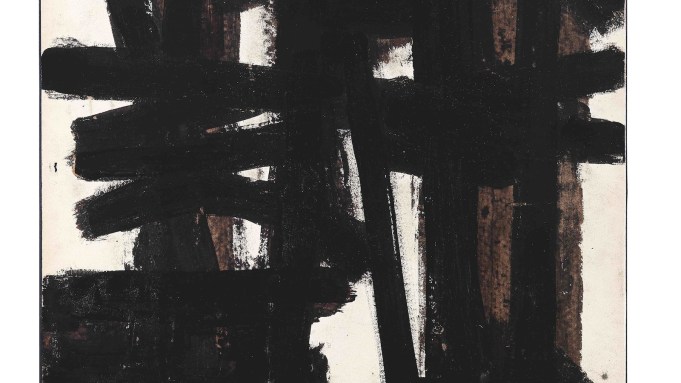 The French are no strangers to strikes. So few took notice, on the morning of May 30, when a group of angry farmers in the southern village of Rodez capitalized on the presence of president François Hollande—down from Paris to inaugurate a new museum for artist Pierre Soulages—by staging a protest against recent farming legislation and temporarily locking a presidential advisor inside the Department of Agriculture. The event was little covered in French publications, and mere blocks away, beyond the rose-colored 13th-century cathedral and down the main boulevard in a modest public garden, the launch of the Musée Soulages went on undeterred.

Ninety-four years old, towering over six feet tall and often described as “the painter of black,” Soulages was born in Rodez in 1919 on a small street across from where the museum now stands. His somber abstractions have long been venerated throughout Europe, and official state support for the creation of an institution in his name was declared in 2004. (Two donations made by the artist and his wife to the city of Rodez, totaling over 500 works and valued cumulatively at $54.7 million, anchor the permanent collection.) Still active in his Paris studio and largely self-taught—he dropped out of two Beaux-Arts schools—he remains France’s top-selling contemporary artist at auction, where his early works routinely bring sums of up to $4 million. He has exhibited around the world: as the first living artist shown at St. Petersburg’s State Hermitage Museum, 2001, and in the largest exhibition ever mounted for a contemporary artist at Paris’s Pompidou Center, in 2009.

In the United States, however, Soulages’ professional trajectory has been erratic. Introduced to American audiences in the 1950s by James Johnson Sweeney, then-director of New York’s Guggenheim Museum, he was briefly celebrated as a sort of European counterpart to the Abstract Expressionists. Many of his works were purchased by major public collections (Houston’s Menil Collection, New York’s MoMA) and private collectors, including Orson Welles and Alfred Hitchcock. But his renown ebbed with the shuttering of Samuel Kootz’s legendary New York gallery in 1966; until his current dual-venue exhibition at Manhattan’s Dominique Lévy gallery and Galerie Perrotin, he hadn’t shown in the U.S. for 10 years.

Despite the global appeal of his compositions, the artist has consistently expressed the aesthetic influence of his provincial hometown, citing the colors and textures of its Romanesque architecture and stark facades. The street where he was raised, Rue Combarel, housed a variety of merchant shops, and he was intrigued at a young age by artisanal craft. At the local Museum Fenaille, he discovered the enigmatic menhirs: figurative stone sculptures etched in bas-relief, dating from sometime between 3,500 and 2,300 B.C. and unearthed throughout the Lacaune region. And when, in 1986, he was invited to design a suite of stained glass windows for any one of several centuries-old French churches, he chose the Abbey of Sainte Foy in the tiny neighboring town of Conques—the place where he decided, at age 14, to become an artist.

A similar appreciation of the local environment is embodied in the Soulages Museum, built with $34 million from the Midi-Pyrénées regional council, the municipality of Aveyron, and the French government. Designed by Catalan architects RCR and featuring a bistro by Michelin three-star chef Michel Bras—both architect and chef were selected by jury from an open call—this simple arrangement of Corten-steel boxes in varying heights is both rustic and modern, merging with the surrounding landscape of grass and stone while standing somehow apart. Perched on a hill, the building looks out over a sloping sea of apartment complexes and industrial supply stores, but its doors open toward the city’s historic center. Its rust-dappled surfaces—which will continue to accumulate a patina over time—complement the notes of yellow, ochre, and pink in the regional sandstone, while its cool, dark gray steel interiors recall the village’s slate roofs.

Inside, a large research library is joined by 18,300 square feet of permanent exhibition space and a 5,000-square-foot temporary exhibitions gallery. In most galleries, steel walls accommodate installation by magnet and obviate drilling holes, while a system of adjustable ceiling slats and scrims allows for a combination of natural and artificial light—a necessity for the exhibition of Soulages’s works, many of which are painted exclusively in black.

The first iteration of the permanent collection, which museum director and head curator Benoit Decron says will be supplemented regularly with loans from private and public holdings, takes viewers chronologically through Soulages’s artistic formation. In early landscape paintings from the 1930s, small representations of trees, hillsides and valleys emphasize the acrid and dry, forsaking the lush and verdant. Already, we see the young artist negotiating between the abstract and figurative, reducing organic forms into geometric configurations and using the branches of trees as a way to frame or delineate space.

In the 1940s Soulages abandoned a painter’s traditional tools—brushes, easels, palettes—and picked up rakes and rollers, adopting a more physical relationship to his work. He turned briefly from oil paint to walnut stain, and his powerful Brou de Noix paintings on paper, rarely seen in public collections, are surprisingly reminiscent of Robert Motherwell. In stark contrast to the work of his French contemporaries, many of whom were still exploring movements pioneered before the war, such as Surrealism, Soulages’ walnut stains eliminate representation altogether. Fluid forms are juxtaposed with architectural bars and beams, and pockets of bare canvas peek through from behind. Such manipulation of light—by transparency or contrast—has remained constant throughout the artist’s work in all mediums.

That includes printmaking, which has been a staple of his practice since the late ’40s. Installed in a series of darkened rooms, a substantial selection of his lithographs and etchings are exhibited along with their printing plates. Rendered in earth-toned blues, browns and sandy yellows, these abstract compositions on paper have the spare, graphic quality of Japanese calligraphy, and mottled surfaces that evoke raw stone. In a suite of related bronze relief sculptures hung nearby, Soulages translates the gestures delineated in ink into three dimensions, while the majority of the main galleries are devoted to his large-scale oil paintings. Black progressively dominates, leading eventually to the series that has occupied him since 1979: his shimmering “Outrenoirs,” translated loosely as “beyond black” and exclusively featuring black paint.

Thirty of these stark canvases, made over the past 35 years and borrowed from museums around the world, constitute the museum’s inaugural temporary exhibition, up through October. In these towering black objects, which occupy space like silent sentinels, layers of thick black impasto are drawn across already hardened slats of paint, creating the appearance of modeled ridges and valleys or staggered tectonic plates. Decron has emphasized the physicality of these paintings by installing some of them in the center of the room, held upright by cables drawn taut to the ceiling and anchored to the floor. (He borrowed the idea from the Museum of Fine Arts, Houston, which mounted the artist’s first retrospective, in 1966.)

Throughout his life, Soulages has striven to eliminate excess from his work, attempting to access the most basic elements of perception: light and form. He has often declared that “black is light,” and his Outrenoirs lend authority to that proclamation. Modeled subtly and deprived of distracting colors, Soulages’ black canvases have a luminous quality, reflecting the light around them while also projecting their own, which shifts and blinks like a window in the sun.

The LVMH Prize Is Turning 10 – and Open for Applications

‘Harry & Meghan’: Duke and Duchess of Sussex Open Up About Their Love Story in New Docuseries

60+ Useless Gag Gifts That Are Simultaneously Absurd and Awesome