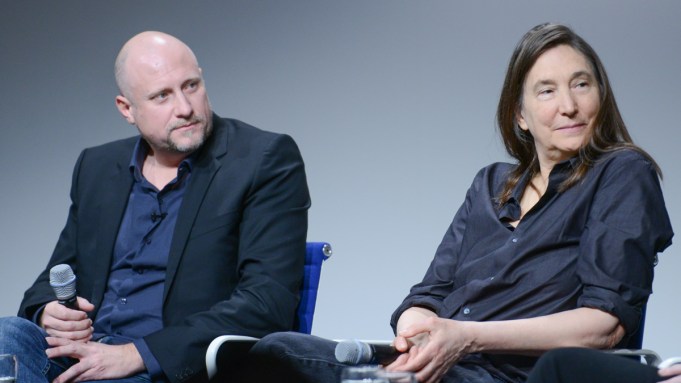 Money talks, but words seemed hard to find this week at Art Basel Miami Beach (Dec. 2-6). Anticipating the point when small talk was about to veer into nonsense, David Gryn, the fair’s film curator, joked on Wednesday at a New World Symphony SoundScape Park outdoor screening that he organized, “What’s the drug to take for talking?” The next night, Franklin Sirmans, the new director of the Pérez Art Museum Miami, addressed the audience at Ryan McNamara and Devonté Hynes’s performance with a hoarse voice, before clearing his throat, “I won’t say very much.”

There’s exhaustion in the air only a couple days into the festivities, and I’m sick and tired of all the rain. Talking seems to be work, especially for the gallerists hovering around their booths. Fortunately, much of the art at the fair speaks for itself. Text-based art is everywhere in the Miami Beach Convention Center, where the namesake Art Basel fair is staging its 14th edition. Tracey Emin’s scribbled confessions of love in neon are selling at Lehmann Maupin for around $100,000 to $200,000, while Richard Prince’s Freudian jokes are selling for $3 million at Gagosian. The status of language was a topic of conversation between artists Jenny Holzer and Trevor Paglen Thursday morning as well, during a panel in Art Basel’s Conversations series moderated by academic Kate Crawford. Speaking about the (often absurd) classified government documents he and Holzer have both used in their work—Holzer has projected redacted classified documents onto buildings, while Paglen has done the same with the code names of government surveillance programs—Paglen noted that these government records, especially when recontextualized, expose a grimmer side of abstraction. Where for many artists and thinkers, abstract language was once thought to have imaginative potential, these documents reveal its dangers.

Another speculative system, however, drives the art world’s well-oiled machine: money. Paglen spoke about the language around surveillance, but the market that drives art fairs embodies abstraction to the point of nonsense too. Abstract paintings are some of the best poker chips, as evidenced by their being flipped in recent years. But if I’m observing the trends, it’s clear that abstract is out and figurative is in, as evidenced by Gagosian Gallery and Jeffrey Deitch’s four-story off-site collaboration “Unrealism,” a group show unafraid of paintings with people in them. In canvases from John Currin’s neo-Renaissance portrait Rachel in the Garden (2003) to Chloe Wise’s I REMEMBER EVERYTHING I’VE EVER EATEN (2015) depicting trans model-actress Hari Nef, the works are not just of someone, but of someone with brand-name recognition.

Some other people you might recognize here in the flesh in Miami (Nef skipped this year’s iteration) include Sylvester Stallone (an artist now, apparently, overheard to be anxious about a future solo show), Leonardo DiCaprio (in a newsboy cap pulled down low, being led to the Kohn Gallery booth by a man with bright neon green Nike Frees, an entourage trailing behind them) and Paris Hilton (posing for photos at the Artsy-sponsored Nautilus Hotel beach party). Some teenagers weren’t sure if they recognized musician Devonté Hynes while he was playing at the Pérez Art Mueum Miami on Wednesday as part of Dimensions, his collaboration with artist Ryan McNamara. “Are you sure it’s him?” one of them whispered to the other, eyeing the silhouette bathed in purple light, slapping the bass in front of a Miami skyline dominated by water and freeways.

They weren’t the only ones being annoying. While words seemed to have been escaping people all week, Thursday night was the first time I wished everyone would just shut up. I had come to the museum to see a dance piece, while most of the thousands of people were there for a party. Still, the performance managed to thematize the audience’s distraction-perhaps no surprise coming from McNamara, who brought his ME3M ballet about the Internet’s fragmentation to Miami last year.

The immersive deconstructed opera Dimensions took place on eight small wooden stages, like colorful puzzle pieces spread out around the museum’s courtyard. Atop each platform, pairs (and one trio) of musicians and dancers improvised, playing off one another. The discrete collaborations felt both intuitive and introspective, while the sum total of the parts had a noisy dissonance. The performances were subtle, and as the evening wore on and more partygoers arrived, they were increasingly ignored—that is, until the stagehands instigated something like a return to Pangaea, slowly rolling the stages together, evoking the utopian desire for something prior to fragmentation. The improvisation continued, and continued to test the audience’s attention span. People clapped nervously at one point, not sure if it was over or not. Then the performers started up once again. The anti-climactic union eschewed any celebratory conclusion and contradicted the narrative of an easy return to some sort of Golden Age.