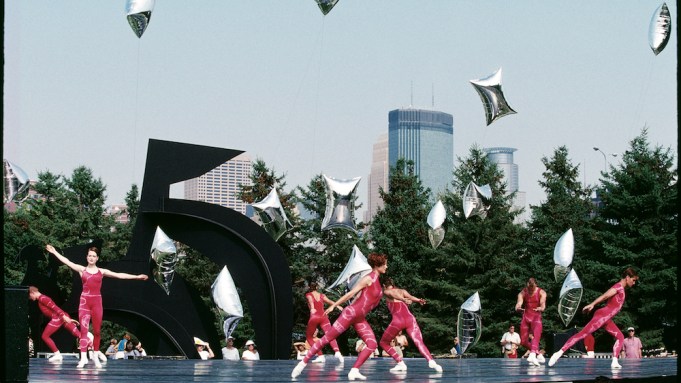 “One thing I can tell you about this dance is it has no center.”1 That’s how Merce Cunningham described his choreography for Summerspace (1958) to Robert Rauschenberg, who designed the set and costumes for the performance. The displacement of fixed centers and rigid boundaries is a consistent theme in “Merce Cunningham: Common Time,” an exhibition on view concurrently this spring at two museums: the Walker Art Center in Minneapolis, where the major portion remains until July 30, and the Museum of Contemporary Art Chicago. The shared presentation, organized by the Walker’s Fionn Meade and Philip Bither with Joan Rothfuss and Mary Coyne, mirrored the collaborative artistic practices represented in the galleries. Drawing from the archives of the Merce Cunningham Dance Company (MCDC), which the Walker acquired in 2011 following Cunningham’s death in 2009, the show features films and videos of Cunningham’s performances, costumes, and sets, along with ephemera related to the company’s activities. What emerges was—and is—less a retrospective of a single choreographer than a representation of a diffuse network of like-minded artists who redefined American culture in the mid-twentieth century. Printed on a wall near the entrance to the MCA presentation were the names of the many artists, composers, musicians, and filmmakers with whom Cunningham worked over his sixty-year career. The constellation of names amounted to a pantheon of American modernist art. Composers David Behrman, Earle Brown, Morton Feldman, Gordon Mumma, Pauline Oliveros, and Christian Wolff joined artists Robert Morris, Andy Warhol, Bruce Nauman, Morris Graves, and Ernesto Neto alongside designers Rei Kawakubo, and James Hall.

The Walker exhibition begins with a display focused on a representative collaboration. Viewers encounter a bright-red wool costume designed by Rauschenberg and worn by Cunningham in the original performance of Changeling (1957). The costume hangs on a mannequin in a small enclosure lit by fixtures behind translucent panels. A matching cap shown on a separate armature seems to float in the air. The display lends the colorful costume a powerful, auratic presence. Yet the static, reliclike quality of the garment is countered by a black-and-white film projected nearby, showing it in use during a performance the choreographer described as part of an exploration of “the possibility of containment and explosion being instantaneous.”2 Cunningham alternates between precisely controlled gestures and unpredictable spasms while David Tudor plays a piano composition by Wolff.

Cunningham typically offered little guidance to the artists and musicians with whom he collaborated. Conceived separately, each component of a performance—music, decor, choreography—retained its autonomy. Cunningham developed this mode of working with John Cage, his partner and chief collaborator. Cage served as musical adviser for MCDC from its founding in 1953 until his death in 1992. At the start of a given project, Cage and Cunningham typically agreed on a set of basic parameters for a piece, such as its overall length and rhythmic structure. They developed the sound and choreography independently. The dancers sometimes heard the music for the first time during the performance itself. This collision of art forms happened in what Cunningham referred to as “common time.” Within this framework, even the most minimal sound pieces could join with stripped-down movements to produce an effect of nearly overwhelming complexity. As the critic Douglas Crimp observed, Cunningham’s audiences “were made aware of the fact that they would miss things, maybe even most things. They were, in short, made aware of their inability to see totality.”3

When composing and performing music, Cage employed aleatory methods, some inspired by the Chinese divination text I Ching. Similarly, Cunningham often used chance operations to determine key aspects of his choreography. For one early solo piece, he made notes on scraps of paper indicating parts of the body, reshuffling the order at random to determine a sequence of movements. The goal was to break away from the linear narrative structures of ballet. Movement was no longer to be in the service of storytelling, but presented as pure activity. As Cunningham once said, in his dances “what is seen is what it is.”4 Choreography that was determined in part by arbitrary structures also marked a departure from the expressive modern dance of Martha Graham, with whom Cunningham worked in the early 1940s. Instead of evoking transcendent feelings, Cunningham’s choreography was grounded in quotidian movement: “a visible action of life,” as he put it.5 According to one often-cited anecdote, when a dancer asked Cunningham what Minutiae (1954) was about, he took the dancer to the window of his studio, pointed to the street below and said: “That.”6

Cunningham developed his distinctive aesthetic and working process at Black Mountain College in Asheville, North Carolina. He first visited the school in 1948 and eventually founded the MCDC there. Black Mountain College was a site for experimentation, open-ended exploration, and cross-disciplinary thinking. As MCDC dancer Carolyn Brown is quoted as saying in the “Common Time” catalogue, “it wasn’t just talking about dance, dance, dance. It was about all the arts.”7 In this spirit, Cunningham enlisted Rauschenberg, a fellow Black Mountain resident, to be the company’s first artistic adviser, a position he held from 1954 through 1964.

Minutiae, which premiered at the Brooklyn Academy of Music, was their first collaboration. Cunningham’s instructions to the artist were vague: he requested a set that could be transported easily on the roof of the company’s Volkswagen tour bus. This resulted in what is arguably Rauschenberg’s first Combine—a collapsible plywood structure adorned with a mix of oil paint, paper, fabric, newsprint, wood, metal, and a rotating mirror. During the performance, dancers moved through and around the diminutive set, one panel of which protrudes a few feet in front of the others to establish a basic sense of architectural space.

In both exhibition venues, Cunningham’s collaborations were examined through displays focused on key individual projects. At the Walker, for example, a gallery is devoted to Summerspace, a work conceived during the MCDC’s residency at the American Dance Festival in 1958 at Connecticut College in New London. According to Cunningham, the energetic piece is about “people and velocities.”8 Rauschenberg painted leotards and tights with colorful dots in a pattern that suggests a close-up view of a pointillist painting. These garments hang over a clothing rack positioned in front of an expansive mural featuring the same dot pattern spreading from corner to corner.

When Jasper Johns succeeded Rauschenberg as artistic adviser in 1965, he frequently commissioned other artists to design sets. For Scramble (1967), Frank Stella designed six canvas banners, each a different color, that the dancers reconfigured throughout the performance. Andy Warhol’s floating Mylar clouds became interactive decor for RainForest (1968). And after having seen Bruce Nauman’s Performance Corridor (1969) at the Whitney Museum of American Art in New York, Johns invited him to design the set for Tread (1970). Nauman positioned six industrial fans to blow out toward the audience, partially obscuring the view of the dancers.

Johns himself designed the set for Walkaround Time (1968). The playful title comes from the early days of computers, when users had time to go for a stroll as the machines processed information. (Cunningham was an early adopter of computer technology, using animation software to score dances.) Johns borrowed imagery from Marcel Duchamp’s The Bride Stripped Bare by Her Bachelors, Even (The Large Glass), 1915–23, creating large transparent vinyl boxes printed with graphic elements from the French artist’s iconic artwork—a diagrammatic representation of mechanized sexuality. David Behrman created music for the piece by manipulating tapes of recorded sound: a Volkswagen Beetle starting up, his own footsteps around Niagara Falls, and voices of the dancers reading texts by Duchamp.

Artists such as Stan Vanderbeek and Nam June Paik worked with Cunningham on dances meant to be presented as films and videos. Paik’s Merce by Merce by Paik (1978) is a video collage featuring footage of Cunningham performing dances specifically conceived for video. Most of the footage, which Paik manipulated with early digital editing tools, was shot by Charles Atlas, the MCDC’s resident videographer starting in 1974. Atlas’s stunning MC9 (2012) was included at both venues in two variations. The monumental nine-channel video installation, with screens arranged at different angles throughout cavernous galleries, is a profound tribute to Cunningham. Rather than simply documenting Cunningham’s performances and rehearsals, Atlas used footage of them as the basis for new artworks suited to the medium. The immersive installations reflect the core principles of Cunningham’s choreography. The scattered screens emphasize decentralization and simultaneity, each clip competing for the viewer’s attention.

“Common Time” can be viewed in relation to other recent exhibitions that have examined artists working in collaborative, cross-disciplinary modes. “Leap Before You Look: Black Mountain College, 1933–1957,” a 2016 traveling exhibition organized by Helen Molesworth for the Institute of Contemporary Art Boston and the Hammer Museum in Los Angeles, surveyed the cultural innovation fostered at the school. “Experiments in Environment: The Halprin Workshops, 1966–1971” (2014), organized by the Graham Foundation in Chicago in collaboration with the Architectural Archives of the University of Pennsylvania, focused on the workshops held in Northern California in the late ’60s and early ’70s by dancer Anna Halprin and her husband, architect Lawrence Halprin. Participants—dancers, architects, and performance artists—addressed broad questions about movement and space.

I was on the curatorial team for “A Feast of Astonishments: Charlotte Moorman and the Avant-Garde, 1960s–1980s” (2016), at Northwestern University’s Block Museum of Art in Evanston, Illinois. “Common Time” and “A Feast of Astonishments” each focused on a single figure who united huge casts of “supporting characters.” Charlotte Moorman brought together diverse groups of musicians, artists, and filmmakers in her performances and sprawling, carnivalesque festivals. These events, like Cunningham’s performances, are crucial to understanding the development of twentieth-century American art. But any museum exhibition that aims to represent such ephemeral activities produced by a dispersed community of artists is going to face basic questions. How can curators present performances in ways that allow the viewer to visualize past events and bring to life the specific context that fostered them? What objects and documentation enable a meaningful representation of performance works?

Of course, film and video projection throughout the Walker exhibition enliven the static costumes and sets, but it still takes an imaginative leap by the visitor to put these components together and walk away with a sense of what it felt like to witness live dance. In addition to costumes, decor, documentation, and ephemera, both the Walker Art Center and the MCA also included objects from their collections—paintings, sculptures, and videos—by the artists who worked with Cunningham. These objects reinforce the connections between performance and permanent artworks to suggest conversations between practices.

Cunningham once said, “You have to love dancing to stick with it. It gives you nothing back, no manuscripts to store away, no paintings to show on walls and maybe hang in museums, no poems to be printed and sold, nothing but that single fleeting moment when you feel alive.”9 “Common Time” thankfully defies Cunningham’s claim in a nuanced way. The show feels alive precisely because it upends museum convention, transforming the stuff of archives into a dynamic experience true to Cunningham’s collaborative ethos.