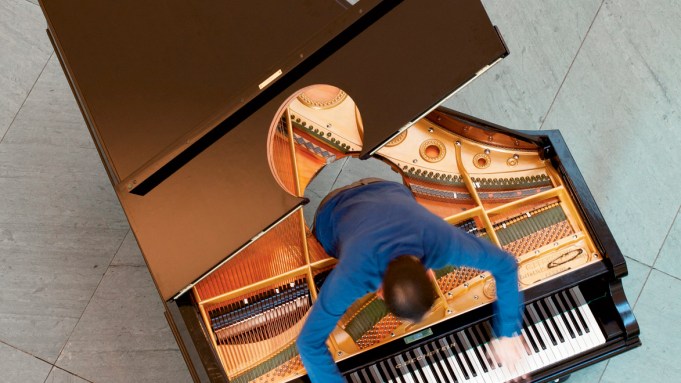 With its competing national pavilions, the Venice Biennale could be considered the art world’s Olympic Games. So it seems fitting that the artist duo representing the United States, Jennifer Allora and Guillermo Calzadilla, have designed an exhibition that features live Olympic and other top athletes.

Visitors to the pavilion will see gymnasts and runners interacting with sculptural objects, in a series of what promise to be entertaining performances. But the artists have wider ambitions, using athletics as a proxy for militarism, nationalism, international trade, jingoistic spectacle, and all the pomp and circumstance of big international biennials.

“The Olympics have always been about becoming bigger, faster, stronger,” Calzadilla told A.i.A. “We wanted to play with that institution, break it apart, make it mean something else, while still having something of what it had before.”

The husband-and-wife team was a surprise choice for the U.S. pavilion. They are not only among the youngest artists to be given that honor—Allora is 37, Calzadilla 40—but are also the first collaborative. And their work has been openly critical of the United States—often referencing the history of U.S. military bombing practice on the island of Vieques, near their home in Puerto Rico. In 2004’s Returning a Sound, for instance, they attached a trumpet to the exhaust pipe of a motorcycle and had a rider circle Vieques. The action, captured on video, is a triumphant riposte to years of bomb sirens, which ended in 2003 when the U.S. Navy ceased bombing practice there.

Their Biennale exhibition, titled “Gloria,” will feature six new commissions: three performance-sculpture hybrids, two slightly more conventional sculptures and a film. The mix is appropriate for artists who don’t identify with any particular school or medium.

Body in Flight (Delta) and Body in Flight (American), installed on either side of the rotunda, are modified reproductions of business-class airline seats—closely modeled on American Airlines and Delta designs—and serve as apparatuses for unconventional gymnastics routines. Track and Field, which is sited outside the pavilion due to its size and weight, repurposes an overturned military tank as a treadmill. (Allora & Calzadilla’s original vision for the exhibition was to fill the entire pavilion with numerous athletes and performers.)

During the opening week, several elite athletes are performing. A 2008 Olympic silver medalist, Chellsie Memmel, is using the long, curved armrest of one of the airline seats as a balance beam; the 2007 All-Around champion in the U.S., David Durante, is executing pommel horse moves on the other, more padded seat.

Gymnasts will also appear in a two-screen silent film, Half Mast/Full Mast, that was shot in Vieques last year. As the title suggests, the athletes interact with flagpoles in various sites around the island.
The performances for Body in Flight, beginning every hour on the hour, will last 15-20 minutes. That length of time, Allora notes, is a big departure from the typical, 2-to-3-minute gymnastics routine. “We’re slowing things down, stretching them out,” she says, “taking things that you know and making them strange.”

The artists also point to the fact that the airline seats partially obstruct the public’s view of the athletes, something that real gym equipment would never do. “There are moments where you just see a head, or a hand or an arm, because of the way the seat intersects the body of the performer,” Allora explains. The result is a kind of “perverted or contaminated gymnastics,” as Calzadilla describes it. To develop the movements, Allora & Calzadilla worked with choreographers as well as coaches from USA Gymnastics. The artists have previously used dance in their work Compass (2009). Conceived for the Temporäre Kunsthalle Berlin, this project featured a dropped ceiling that separated dancers from an audience; the result was a dance performance that could be heard but not seen.

Ideas from conventional sculpture are also in play. The artists say that they were thinking about Brancusi’s Bird in Space (1923), with its aerodynamic form that seems to take flight from the pedestal. In this case, the pedestal (the seat) also has a close relationship to the Pop object and the readymade. The business-class chair, Allora says, represents “an advanced form of industrial design, the ultimate commodity fetish.”
Another consumerist chaise, the tanning bed, is the focus of a sculpture installed in the pavilion’s rotunda. Its inhabitant is not a live human, but an altered bronze replica of the statue that crowns the U.S. Capitol Building. Titled Armed Freedom Lying on a Sunbed, the piece will call attention to the architectural parallels between the pavilion and the Capitol (and may also bring to mind certain politicians with perma-tans).
Algorithm, the other sculpture, is more interactive. It combines a custom-made pipe organ with a functional automatic teller machine; the ATM will generate a unique musical score for each transaction performed.

The Venice projects have a close relationship to the couple’s recent performance piece Stop, Repair, Prepare: Variations on “Ode to Joy” for a Prepared Piano, which delighted audiences and impressed critics when it was presented in 2008 in the atrium of New York’s Museum of Modern Art. It involves a musician performing part of Beethoven’s Ninth Symphony while standing in a hole in a modified grand piano and slowly walking it around the space. In both cases, the artists are inducing trained professionals to relearn their crafts, but with a twist—the piano must be played backwards and from behind the keys, the balance beam walked with slopes and curves. “We’re asking them to reinvent their skills, or to use their skills to make new gestures or forms that are not part of their standard vocabulary,” Allora says. “And this idea of re-skilling doesn’t end with the performer,” Calzadilla adds. “The public is asked to re-skill its way of viewing.”

“You have modern choreographers, professional athletes, artists working together. It feels incredibly avant-garde,” says Lisa Freiman, senior curator of contemporary art at the Indianapolis Museum of Art and commissioner of the U.S. Pavilion. “They’re creating a new language for art.”

Despite the show’s experimental nature and ambiguous allusions to geopolitics, the artists’ Biennale proposal had strong support from the State Department (its Bureau of Educational and Cultural Affairs has a role in selecting the country’s representative). “At this moment in time, with all of the conflicts going on around the world, their project is one of the most important statements that the United States could make in an international context,” Freiman asserts. “So much of Allora & Calzadilla’s work deals with conflict—whether it’s esthetic, social or political—played out in physical form.”

The relationship between athletics, nationalism and the military is especially pronounced in Track and Field, for which one tread of an overturned military tank has been replaced with a functioning treadmill. The 1996 gold-medal-winning decathlete Dan O’Brien is among those scheduled to run atop the piece in 45-minute sessions. If Body in Flight is in part an homage to Brancusi, Track and Field inevitably evokes Claes Oldenburg’s lipstick on tank treads.

Clearly, this is an extraordinarily self-critical U.S. pavilion. But the artists are protected, in a way, by the multivalent nature of their work—the idea that a gymnastics routine can also be a sculpture, a dance or a display of military prowess. The other criticism embedded in the work—its commentary on the competitive pressures of the Biennale—may also be a kind of insulation. Last time around, Bruce Nauman’s U.S. Pavilion took home the gold (the Golden Lion award for best national participation). That honor would be quite a victory for the younger and comparatively untested Allora & Calzadilla.

Yet it’s hard to ignore the level of ambition in their project, which has required Olympian measures of teamwork and discipline from the artists and their collaborators. As Allora says, “This anxiety or tension that’s part of competition is there—that sense of training for five years to make the perfect somersault.”
Karen Rosenberg is a freelance critic and regular contributor to the New York Times.