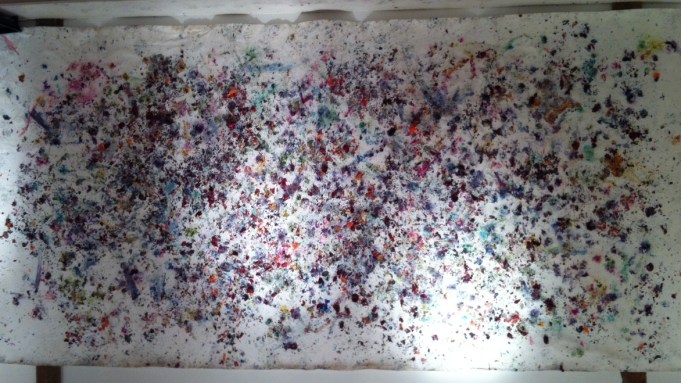 As a tony refuge from the hubbub of the season’s New York City fairs, check out “Unpainted Paintings,” an exhibition of more than three dozen paintings in unconventional materials and formats by nearly as many artists, which opened at Luxembourg & Dayan on Mar. 3. The works, many never before exhibited, or only rarely, date from the mid-1950s to the present.

“Unpainted Paintings,” the fourth show at the Upper East Side gallery owned by Amalia Dayan and Daniella Luxembourg,  extends its proprietors’ agenda of museum-quality exhibitions mixing loans and commercially available fare. The aim is to be “historical”—sort of.  “We are definitely dealers, so we want to have things for sale,” Dayan tells A.i.A. “We are not a museum. But we are trying to do historical shows that interest us, and do very few of them, because it takes quite a lot of time to organize them.” The show will run on a museum schedule, closing after three months, on May 27.

Alison Gingeras, the author of the catalogue for L & D’s showing of Jeff Koons’s controversial “Made in Heaven” series last fall, returned to curate “Unpainted Paintings.” With Dayan (“Alison gave me the list,” says Dayan, “and I went on the hunt”), Gingeras, who is chief curator at François Pinault’s private museum Palazzo Grassi in Venice, compiled the show at lightning speed, given a roster of sometimes esoteric, mostly blue-chip artists, and drawing frequently from amenable artists’ estates and studios.  “I first started thinking about this show after Christmas, when I had a ‘eureka’ moment,” said Gingeras at a museum-style press opening (albeit with nicer croissants). “It follows a thread that runs through various things I’ve done in the past that have to do with the artist’s search for radicality, for breaking outside the limits of convention.”

Arranged thematically over four full floors in the gallery’s 77th Street townhouse, the show takes some liberties with “history,” giving little indication of how or why works might have been created, and no context. (A catalogue to be issued this summer will presumably fill in the blanks.) However, what the show lacks in academic clarity it makes up for in esthetic quality—both in individual pieces and an astute installation-and the opportunity for some real finds.

The earliest works in the show are a little 1954 burlap assemblage by Alberto Burri that veers moodily between a gash painted bloodred and a hopeful little chink of goldleaf, and a small “Gold Painting” (1955) by Robert Rauschenberg that poignantly sheds flakes into its shallow-box frame. Among the latest, dating from 2011, is a square of carpet cut from Paul McCarthy’s studio floor. A snarly take on the postmodernist “flatbed” painting, it comes complete with paint droppings, brushes, unwrapped condoms, surgical gloves and other debris. It resulted, Gingeras says, “from McCarthy’s making sculptures on top.”

In between are paintings produced by fire and urine (Yves Klein and Andy Warhol, respectively); gashed (Steven Parrino) and pierced (Lucio Fontana); strapped (Donald Moffett) and bondaged (Otto Muehl); poured (Lynda Benglis) and stained with Kool-Aid (David Hammons). Forge past the mediocre crushed-flower painting by Dan Colen that greets you at the entrance and head upstairs, where a lit candle flickers and melts within a salt  and lead surface in a work by Pier Paolo Calzolari, and torn posters peel from four wooden planks in a piece by Raymond Hains. There are also a number of “paintings” in fiber: by Richard Tuttle (a flat, “waving” flag in dyed canvas and thread), Julian Schnabel (an oil-and-modeling paste cross on shag carpet) and Sheila Hicks (a cool geometric abstraction woven in stainless steel, linen and wool), among others. To get a sense of process, grab some time to watch rare footage of Gutai artists at work, hurling paint at canvas or smearing it around in bare feet.

Gingeras has experience with both museums and galleries, although working with the latter is “really enjoyable, a kind of liberation. I’m used to working on a museum timetable, but you’d be surprised when you make a couple of phone calls or write a letter how quickly you can find some things.” Presumably, ready and flexible resources sweeten the deals, as the art world continues its inexorable march toward increased privatization.