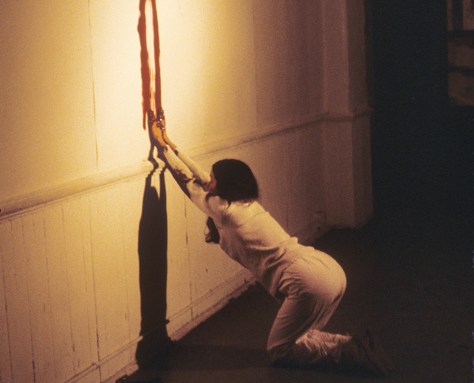 25 years ago, on September 8, 1985, celebrated feminist body artist Ana Mendieta fell 34 floors to her death from the window of her Greenwich Village apartment. The only other person with her at the time was her husband of only eight months, prominent minimalist sculptor Carl Andre. Arrested and charged with second-degree murder, Andre’s three-year legal struggle culminated in a trial by a judge rather than by a jury, a rarity in murder cases. Evidence was suppressed due to sloppy police and prosecutorial work, and ultimately, Andre was acquitted of all charges related to her death in 1988.

“Where is Ana Mendieta? Donde está Ana Mendieta? 25 Years Later” was a symposium held on the closing night of the eponymous exhibition presented in the Fales Library and Special Collections gallery of NYU’s Bobst Library. Running from August 1 to October 8, the exhibition presented career-spanning works by Mendieta, related archival documents, and a documentary film about Mendieta, BloodWork: The Ana Mendieta Story, by Richard Move, who also curated the exhibition.

Move also emceed the symposium, which boasted an exceptional panel of noted curators, scholars, and artists including Kat Griefen, Director of A.I.R. Gallery, Genevieve Hyacinthe, professor of Afro-Atlantic and Contemporary Art at SUNY Purchase, José Esteban Muñoz, Chair of NYU’s Performance Studies program, Diana Taylor, professor of performance and Spanish studies at NYU, and Carolee Schneemann, legendary performance artist and friend of Mendieta, all of whom spoke about Mendieta’s life, work, and controversial death. In fact, the exhibition and symposium are among the only such events to ever explicitly confront the circumstances surrounding her death and to overtly frame Carl Andre’s acquittal of her murder as unjust.

The symposium was located in a small theater in the Performance Studies department in NYU’s Tisch School of the Arts. The overwhelming turnout for the symposium-turned-courtroom drama was much larger than the venue, and some attendees were turned away; the back rows were designated as standing room only. The event was kicked off with a screening of Move’s 15-minute documentary, BloodWork, featuring faithful reenactments of Mendieta’s most well known performances by a look-alike actress as well as interviews with Yvonne Rainer, B. Ruby Rich, Carolee Schneemann, and José Esteban Muñoz, among others. LEFT: BODY TRACKS BY ANA MENDIETA, 1982.

In their search to discover “Where is Ana Mendieta?” the panelists plotted divergent paths. Kat Griefen’s hunt for Ana led her to the A.I.R Gallery archives, where she excavated information about Mendieta from the three-year period that she was a member of the artist-run gallery. Griefen explains that while she played an active role in the gallery early on, and curated significant exhibitions there such as the 1980 “The Dialectics of Isolation: Third World Women Artists of the United States,” Mendieta seemed to have lost interest in the final years of her membership.

By contrast, the scholars on the panel engaged in their quest to “find Ana” by examining her work through various methodological and theoretical tropes. In her talk “Divinating Black Body and Black African Sisterhood,” Genevieve Hyacinth confronted issues of race and ethnicity, comparing Mendieta’s work to other Cuban female performance artists, and considering it in relation to the Black Cuban spiritual practice of Santería. While Hyacinth acknowledged that Mendieta did not actually practice Santería herself, she asserts that Mendieta drew on the religion in her performances to “assault her whiteness and social privileges.” LEFT: CAROLEE SCHNEEMAN. PHOTO BY GILLIAN SNEED

Like Hyacinth, José Esteban Muñoz, investigated Mendieta’s ethnic, cultural, and racial “identifications, disidentifications, and counteridentifications.” Relying on the theoretical approach he is developing in his forthcoming book, Feeling Brown: Ethnicity, Affect, and Performance, Muñoz discussed the “feeling brown-ness” inherent to her work, an affective tone in which she “stages a sense of the world as brown (not the sole province of ‘brown people’) but a sharing out of brown as a sense of the world.”

By contrast, Diana Taylor attempted to locate Ana through her absence. Calling into question the notion of re-performance, she compared the reenactments of Mendieta by an actress in Move’s film to the re-performances of Marina AbramoviÄ?’s seminal works by surrogates in her recent MoMA retrospective. For Taylor such reenactments are antithetical to authentic performances, and result in the mummification of the works by neutralizing the improvisational risk and vitality of the original performances they seek to approximate, posing the question: “Is [the film] a form of re-performance … that shows that it’s not about the original, but about it’s absence, the silhouette washed out to sea?”

The most personal presentation came from Carolee Schneeman, who discussed her friendship with Mendieta (they were both admirers of Maya Deren and met through Stan Brakhage), and compared her own nature-based feminist performance art of the era with Mendieta’s. Painting a picture of how difficult it was for women artists in the 70s, she reminded the audience that feminist artists of the time were trivialized and denounced as narcissistic. “We have forgotten the dangers of depicting the explicit female body, how much anger and resistance that inspired,” she concluded. LEFT: RICHARD MOVE. PHOTO BY GILLIAN SNEED.

Most riveting, however, was her frank assertion that she is convinced that Andre murdered Mendieta. “She made me change her light bulbs. She was afraid of heights. She would never go near the window,” Schneeman confided, adding how eerie it is to her that Andre still lives in the same apartment from which Mendieta plunged to her death, and that his new wife allegedly makes window-based artworks.

As many mentioned throughout the night, and many more continued to ruminate on during the gallery reception held after the symposium, perhaps the most disturbing detail divulged as the evening unfolded is the coincidence that the Tisch School of the Arts directly overlooks the rooftop of the Delion delicatessen, the actual site of Mendieta’s violent end. In the face of such uncanny convergences of space and time, one can’t help but wonder if in searching far and wide for Ana, we have yet to grasp that she is perhaps much closer to us now than we ever realized.