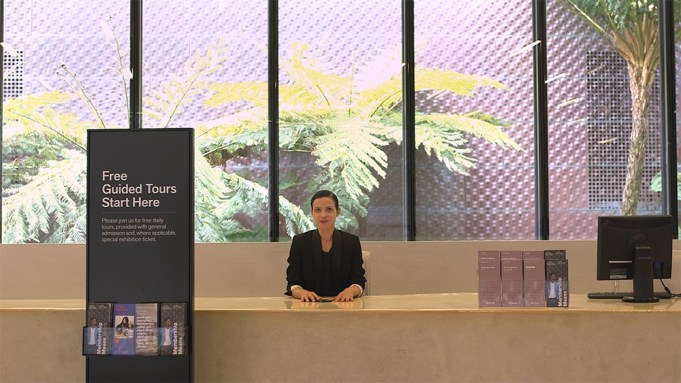 The de Young Museum in San Francisco accurately describes Ana Prvački’s Detour, a new commission developed in collaboration with Google Arts & Culture, as an “alternative” tour. I’d add a few other adjectives: decentralized, wide-ranging, irreverent, semi-private, and technologically advanced. Available through January 5, 2020, Detour is a series of videos meant to be viewed on one’s smartphone at nine specific points in the museum, offering Prvački’s take on the museum’s architecture, gardens, and the views its tower affords. Her videos are activated by the magic of Google Lens, an app most commonly advertised as a way to identify species of flowers and dogs through a smartphone camera. Though Prvački’s tour, as an artwork, is a refreshing and adventurous addition to the museum’s contemporary exhibitions, the requirement to view it through one’s phone via an app often felt like rigmarole invented for the sake of collaborating with a major tech company rather than the future of expanded art viewing.

What is Google Lens? Imagine the promises of Google Glass—an overlay of contextualizing information between your eyeballs and the world—but reined in and applied through the far more fashionable accessory of your already handy personal device. To activate Detour, you need only point your phone’s camera at the symbols found at each stop on the tour, let a dusting of white dots flitter across the screen until they coalesce into a very tappable circle, then tap that circle. This process launches a page with an embedded video and some accompanying information, such as a map of nearby spiritual centers, or the definition of a less well-known word from Prvački’s script. Not every artist equips you with the know-how to use “prelapsarian” in future conversations.

If you have a smartphone (iPhone 6 or newer, or an Android with 2GB of free space) and can launch the app, it’s a fairly smooth process, halfway between a museum audio tour and a scavenger hunt that will take you about 45 minutes to complete. After a few false starts with my obsolete iPhone, I borrowed a device from a friend and managed to enjoy Detour. But the frustration of repeatedly trying and failing to launch Google Lens might dissuade someone without a writing assignment on the line.

In its most sublime moments, Detour uses its short videos to impart lessons in careful observation, human biology, and mythology. Prvački’s delivery is earnest and upbeat; she plays the part of the (slightly off-kilter) museum tour guide to perfection. At several stops, the video switches to audio narration, beginning with the repeated phrase, “Let me speak into your ear.” From the top, the tour recommends using headphones, but with these words, Prvački encourages you to peer outward, tread specific pathways, and wrench your attention from the screen. Her persona slips into a more intimate space, becoming a voice in your head. It’s a bit paradoxical: the tiny woman in the video extolling the virtues of looking into the far-off distance of the real world. But maybe the trust we put into our phones—to provide directions, to store contacts, to amuse and inform us—facilitates our receptiveness to Prvački’s seemingly self-effacing suggestions.

There’s an exterior stop called “Nourishing Facade” at the museum’s east entrance. Here, where a regular guide might provide some information on Herzog & de Meuron’s architecture, Prvački licks the copper siding and delivers a short lecture on nutrition, conservation, and wealth disparity. “Copper is an essential trace mineral necessary for our survival, but it’s not something that our body naturally produces,” she says. Oysters are high in copper, she continues, “but, as you know, oysters are nearing extinction and most people cannot afford them. The architecture of the de Young offers a generous gesture,” she concludes. “Having a little lick is free, nourishing, and democratic.” It worked: I glanced around as a security guard eyed me with suspicion, and I licked the sun-warmed facade. Now Prvački and I weren’t just intimates, but co-conspirators saving the world’s oyster population.

Prvački’s form of institutional critique is sly but gentle. Alongside the museum’s lobby stairway to its subterranean galleries is a spacious terrarium filled with leafy, windswept ferns and neon green moss. At a stop overlooking this scene, the accompanying video shows Prvački sighing as she looks through the glass. “Why can’t I go in there?” she asks. She might as well be saying this at the bottom of the stairs, where you’ll find special exhibitions like “Ed Hardy: Deeper than Skin” with a ticket price nearly double the regular entrance fee.

[Subscribe to the Program, a weekly newsletter about art and technology.]

The aspect of Detour that feels most like magic exists irrespective of the technology that facilitates it. At the “Louise & Penelope,” stop in the sculpture garden, Prvački links Louise Nevelson’s piece Ocean Gate (1982), installed outside, with Franklin Simmons’s marble sculpture Penelope (1896), which is visible at its position inside the museum through a window. The Penelope of Greek myth, Prvački notes, is known for her weaving. “In 2018,” she says, calling attention to the many webs covering Nevelson’s black forms, “I commissioned the spiders of Golden Gate Park to make a connection between these two powerful women.” It’s wonderfully absurd. And like the suggestion to lick the museum, this bit of magical thinking transforms the institution into something else entirely—a structure that doesn’t just house inanimate objects, but exists in concert with its setting; a place for discoveries not necessarily based in art history; and a home to living things (spiders, bees, ferns) that have their own relationships to the de Young.

But back to the mode of presentation. The app is free. The spaces you traverse in the course of visiting Detour’s stops are unticketed. There’s even Wi-Fi to let you download Google Lens without incurring data charges. But the de Young does not provide loaner devices for those without the correct technology who might wish to view Prvački’s work on-site. While Google Arts & Culture has a presentation of the project on its website, the charm of the tour is having a personal guide in your pocket. It wouldn’t make sense as a series of video stations scattered around the museum, either. Not all art is viewable by all people—barriers to entry include geography, admission fees, personal comfort, and social pressures. The de Young is very clear in its positioning of the collaboration with Google Arts & Culture, which includes both Detour and “lensable” items in the permanent collection, as an experiment. But when a museum embraces new technologies and offloads the burden of hosting those technologies onto the user, it limits access to an artwork not by ticket price, but by personal possession. And that’s a shame, because we could probably all use a bit more copper in our systems.