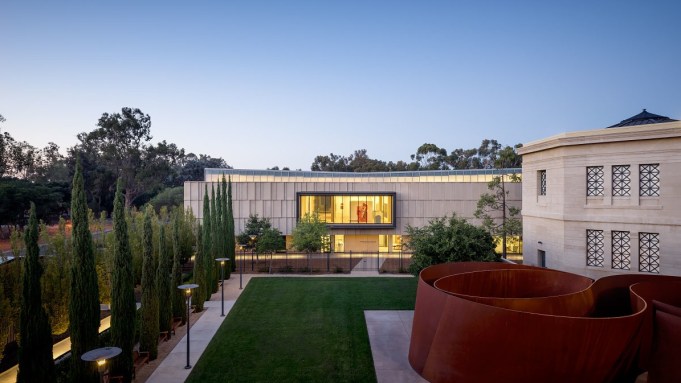 Stanford University, a hub of innovative entrepreneurship in Silicon Valley and the origin of the “sharing economy” (think Uber and Airbnb), is now home to a magnificent example of art sharing. The Anderson Collection, a new museum that is part of Stanford’s push to elevate the arts in undergraduate education, houses a gift of 121 classic postwar and contemporary American paintings and sculptures. Artists represented range from mid-century giants like Jackson Pollock and Willem de Kooning to contemporary artists including Martin Puryear. The collection is a gift from Harry “Hunk” Anderson, a co-founder of the Saga food-service company, his wife Mary Margaret “Moo” Anderson and their daughter Mary Patricia “Putter” Anderson Pence.

The new 33,000-square-foot, $36-million building, designed by Richard Olcott, contains works by 86 artists, the fruit of nearly 50 years of collecting and the product of self-education on the part of Harry and Mary Anderson. A 1964 visit to Paris’s museums inspired the couple to begin collecting. “We started off very naively,” 92-year-old Harry Anderson told A.i.A., “thinking that art was somebody we would play golf with.” Bowled over by the aesthetic experience of great art but novices in connoisseurship, he added, “We had to go from minus 10 to plus 100.” Naiveté about the challenge of building a top-notch art collection played in their favor. “We didn’t know it couldn’t be done,” Harry admits, “so we just went ahead and did it.”

The new museum puts Stanford in the front ranks among elite university museums (especially as it complements the school’s Cantor Art Center, founded in 1891), but it’s got a laid-back, West-coast vibe. Visiting is like dropping in on the Andersons’ unpretentious, ranch-style home nearby. Olcott, of New York-based Ennead Architects, has successfully translated the informality, intimacy and accessibility of their life with art to the public venue.

In the Andersons’ home, the works were displayed simply, as domestic objects. Over the Raggedy Ann and Andy dolls on their daughter’s bed hung the masterwork of the collection, Pollock’s Lucifer (1947); canvases by Josef Albers and Ad Reinhardt flanked a curio cabinet. Over the breakfast table were works by Frank Stella and Wayne Thiebaud, and above the refrigerator an Ed Ruscha. Olcott wanted to approximate this close relationship without his design distracting attention from the works. “It’s all about the art,” he said, meaning no “invasive or in-your-face” design flourishes-just natural light provided by a band of translucent clerestory windows that wraps around the upper level, wood floors and creamy, precast concrete.

Just as in the Andersons’ home, there’s no enfilade sequence to follow from room to room to trace the evolution from mid-century to the present. Instead, there’s an explosion of richness throughout. In just the hallway to their bedroom, Olcott recalls, the walls were hung with works by Adolph Gottlieb, Agnes Martin, Ellsworth Kelly and Helen Frankenthaler. The architect channeled that visual exchange by creating cozy alcoves of various scales and shapes and vistas from one space to others.

In the inaugural installation, the museum features 104 of the gifted works. Visitors can sit to contemplate iconic Abstract Expressionist works like Lucifer, for which Pollock threw out his paintbrushes and dripped and flung skeins of paint on the canvas. World-class examples abound, like de Kooning’s Woman Standing Pink (1954-55), David Smith’s sculpture Timeless Clock (1957) and Rothko’s Pink and White over Red (1957), featuring his trademark floating rectangles. Among other standouts are Color Field works by Frankenthaler and Morris Louis’s “veil” paintings and canvases by Franz Kline, Robert Motherwell and Hans Hofmann.

The collection offers a view of how Abstract Expressionism played out on the Pacific coast. The collection catalogue, titled A Family Affair, could just as easily have been called “East Meets West.”

The concept of migrating ideas is why pride of place goes to Clyfford Still’s 9-by-12-foot painting 1957-J No. 1 (1957). Still is the link that unites the East and West Coasts. When he came to San Francisco to teach in the mid-1940s, he brought the gestural, painterly style of New York abstraction. His pupils transformed it in the 1950s into a local variation called Bay Area Figuration, featuring freely brushed, color-saturated and impastoed figures.

Harry Anderson hopes the co-existence of this West Coast variant and the New York School will be a “revelation” for viewers. “Painters like Diebenkorn, Park and Thiebaud held their own with the best of the best,” he insisted. Bay Area painters like David Park, Richard Diebenkorn, Paul Wonner, and Christopher Brown (his 1992 painting 1946 is a marvel) are given high visibility.

Jason Linetzky, director of the Anderson Collection, told A.i.A. that the diversity of works paints an equitable picture of the postwar American art scene. What’s unusual, he says, is that while the Andersons were buying in the late 1960s and ’70s New York School works created 20 years before by Pollock and de Kooning, they were also collecting contemporary works by California Funk artists like the irreverent ceramicist Robert Arneson, Bay Area Figurative painters and Southern California Light and Space artists like Robert Irwin.

“My hope was to democratize the installation,” Linetzky said, “to present it in a way that doesn’t weight one coast over the other but shows the relationship between the coasts. These things were happening in tandem, with everything responding to everything else.”

Common threads persist in this bicoastal conglomeration. The Andersons sought works that challenged them with new ideas, asking, “Have I seen it before?” and “Could I have thought of it?” They also favored sensitive craftsmanship, what Harry calls “art based on head and hand.” From Joan Mitchell’s loaded brushwork in Before, Again IV (1985) to Wayne Thiebaud’s painting Candy Counter (1962), in which lush pigment seems to frost the images of cakes, a tactile application of paint energizes both abstract and figurative canvases. In sculptures too, like Peter Voulkos’s Untitled Stack (1981) and Martin Puryear’s Dumb Luck (1990), consisting of tar on a hollow mesh form, an artisanal ethos pervades.

The works have now exited one family’s home to reside in the public realm. But the sheer density of the collection’s hang of top-quality works gives a hint of the Andersons’ experience of living with art, which Olcott calls “an unbelievable assault of beauty at every turn.”

UPDATE: This article originally stated that 99 works were on view in the inaugural installation. It has been amended.