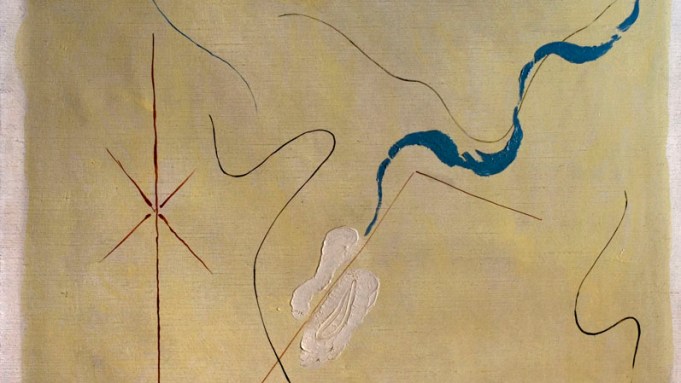 “Andre Masson, The Mythology of Desire: Masterworks from 1925 to 1945,” at Blain Di Donna on the second floor of the Carlyle Hotel [through June 15], comprises over 30 paintings and drawings spanning the artist’s career, from his first Cubist landscapes to experiments with automatic drawing in the late 1920s, to his colorful paintings of Spanish landscapes of the ’30s and his more abstract pastels from the ’40s, the exhibition offers the first attempt at a comprehensive survey in New York since Masson’s 1976 MoMA retrospective.

Opening with L’Histoire De Thésée (1943), a semi-abstract work that interprets the story of Theseus, Ariadne, and the Minotaur, and recalls-albeit on a much less epic scale-Picasso’s 1937 Guernica,  the exhibition thoroughly represents the different styles that Masson experimented with during his early career. Organized somewhat chronologically, the front room of the gallery is dominated by Corrida Au Soleil (1936), a quixotic depiction of a Spanish bullfight, heavily laden with reds and blues. “Masson went to Spain in the mid-1930s in order to be quiet, and enjoy nature, and ended up in the middle of the Spanish Civil War,” Di Donna explained. “The works are about color, movement and dynamism.”

The front room also includes Portrait du poète Heinrich von Kleist (1939), a rendering of the head of von Kleist, a German writer who killed himself at the age of 34. In the painting, the poet’s brain is represented by a pomegranate, a symbol that appears in many of Masson’s works in the exhibition. “The pomegranate has always been an allegory of the human brain, of the blood, how it seeps. How each seed could be a thought. How it is compartmentalized,” Di Donna explained.

The brain was of interest to Masson, who, like fellow Surrealists Georges Bataille, André Breton and Joan Miró, was fascinated with the ways in which the traumas of childhood and war, repressed in the unconscious, could be expressed in art. In a rear gallery, early works on view includ Les Corbeau (1922) and Sentier Sous-Bois (1923) depict dense forests rendered in muted greens, browns, and beiges. A bit  amateurish, they predictably reek of Freud. Di Donna says, “The forests are a maze. They represent how you can get trapped in your own mind.”

In the middle gallery, Masson’s automatic drawings, which later strongly influenced artists such as Jackson Pollock, include Jeune Fille Soufllant Sur Le Feu (1927) and Torse De Femme (1926). In them, Masson’s presence is very much apparent in individual—and sparse—brushstrokes. Utilizing classic mythology, the natural world, and the human form, the works betray the artist’s almost childlike desire to understand his place in a tumultuous world.

For a show that purports to tell the story of the passions of an artist, “Andre Masson, The Mythology of Desire” is relatively PG. Missing from the show is some of the subversive-and erotic-darkness of an artist who, upon his arrival in New York during the Second World War, was said to have a portfolio of his drawings torn up by customs officials, who declared them to be too pornographic to enter the United States.